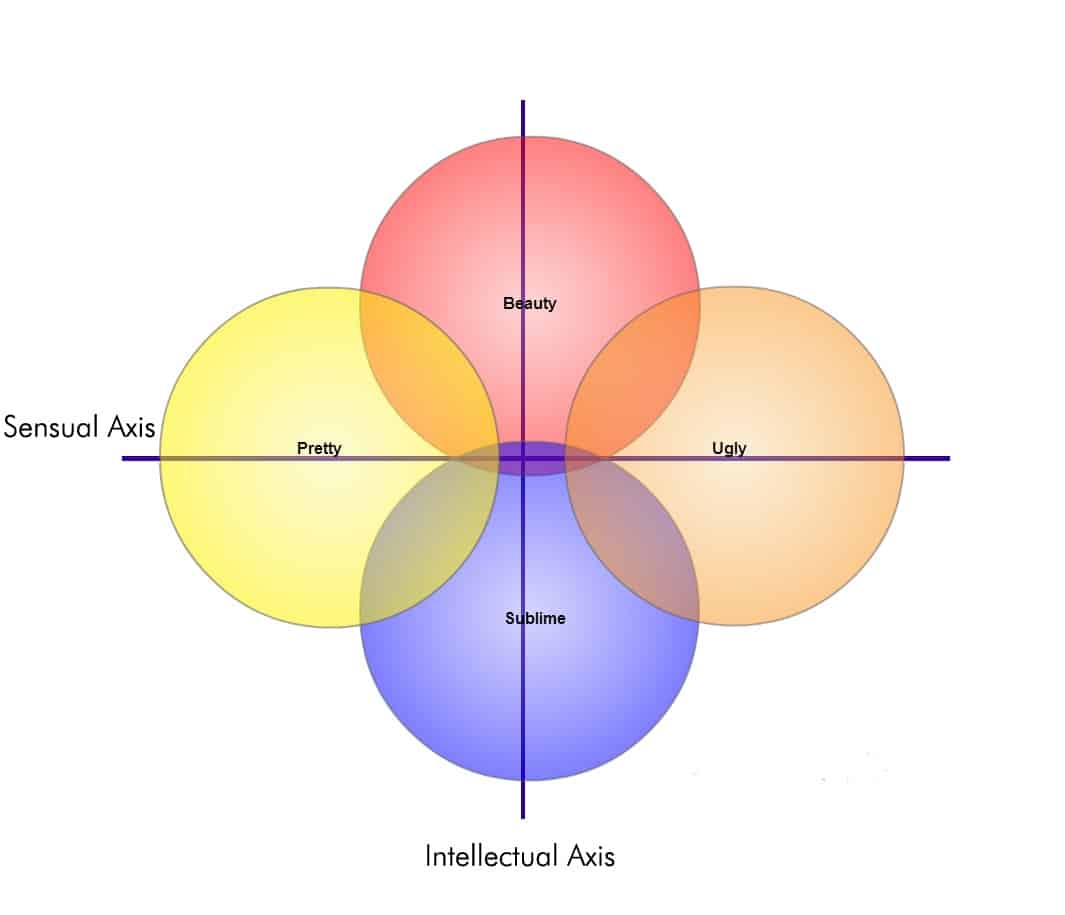 For most people today there is a continuum of aesthetic ranking. Thomas Leddy addresses this paradigm in his work on Everyday Aesthetics.[1] There are many terms that can fit along this continuum but my focus will remain on the terms ugly, pretty, beauty, and sublime. However, one needs to understand that terms such as gorgeous, nice, or a myriad of other terms are either synonymous or fall on various points of the continuum. Carolyn Korsmeyer, for example, claimed, “[i]n certain respects pretty and beautiful can be considered points on a continuum of aesthetically pleasing appearance” and that beauty develops out of pretty by what Korsmeyer calls an “intensification of experience.”[2] Aldo Leopold similarly argued that the “ability to perceive quality in nature begins, as in art, with the pretty. It expands through successive stages of the beautiful to values as yet uncaptured by language.”[3] In a slightly different way, Sean McConnell also argued that ugly and beauty fall along a continuum of aesthetic judgment.[4]

This continuum of aesthetic judgment progresses from the least to the most; something akin to this:

These definitions picked from online dictionaries seem to support this way of thinking on a vernacular level. (The italics are mine.)

Ugly: unpleasant to look at.[5]

Pretty: pleasant to look at or listen to.[6]

Beauty: the quality present in a thing or person that gives intense pleasure or deep satisfaction to the mind, whether arising from sensory manifestations, a meaningful design or pattern, or something else.[7]

It must be noted that there are additional definitions that will be discussed later in reference to my Axis Theory. But, the italicized words in these examples show the progression along the continuum from ugly as unpleasant all the way to sublime as very beautiful (or very intense pleasure). It should be noted that the Continuum Theory often does not hold to ideas of danger and immeasurability as a necessary component of the sublime as one may find with Burke or Kant. The sublime is “merely” an extreme of beauty—a degree of beauty, if you will, and not something of a different character. In this theory, ugly, pretty, beauty, and sublimity are all of the same character. The degree of aesthetic appreciation, pleasantness, or lack thereof, is what distinguishes one from the other.

[4] Sean McConnell, “How Kant Might Explain Ugliness,” British Journal of Aesthetics, Vol. 48, No. 2, (April 2008) 218-219. McConnell’s argument differs significantly from that of Korsmeyer, Leopold, and from what I am proposing but non-the-less still proposes a continuum where ugly and beauty occupy different states in the continuums of unity and pleasure. For McConnell, the continuum contains only ugly and beauty. Objects along the continuum are more or less ugly until they reach the point of “maximal quickening” or the point when they are considered beautiful.

This essay is from our Anastasis Series where we resurrect articles from the past that are either still relevant today or can be easily updated. This piece was first published on March 30, 2014, and has been lightly edited and updated.