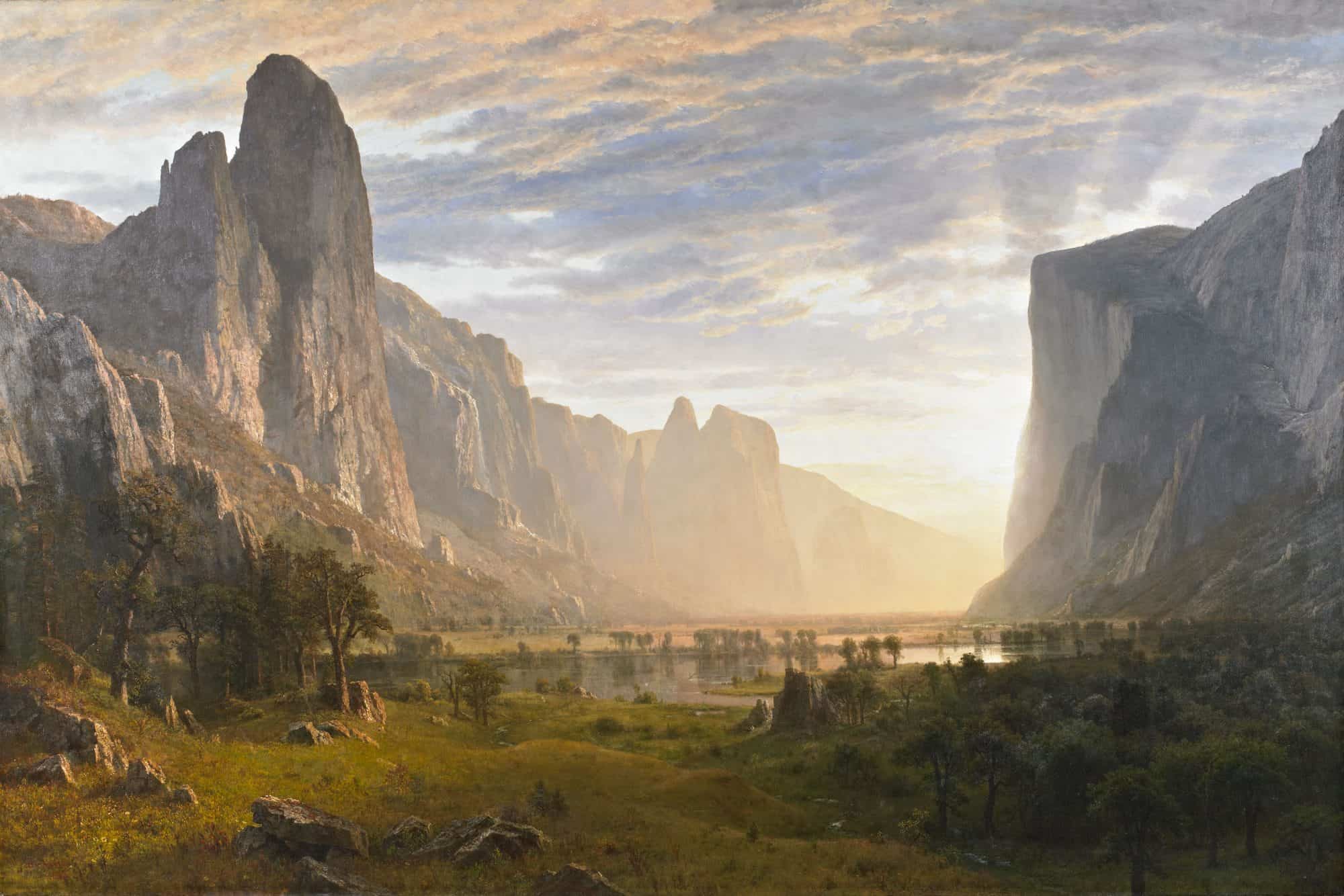 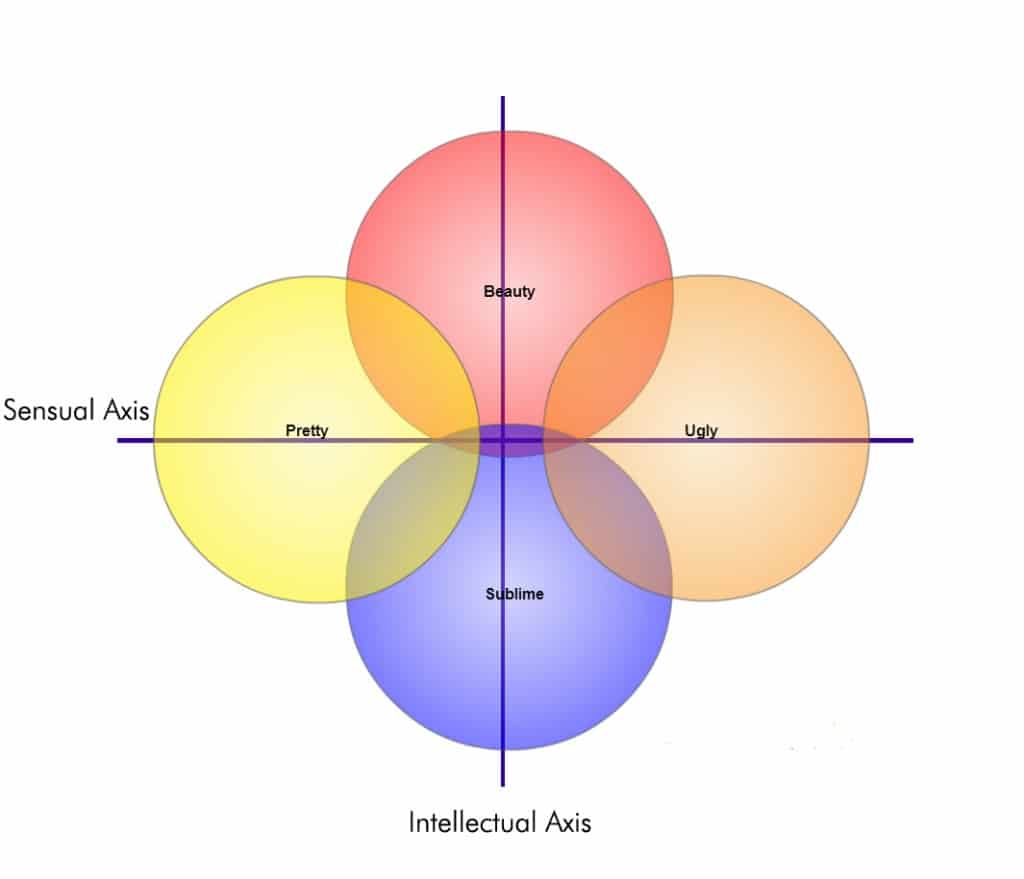 Kant’s distinctions about the sublime, and, in fact, the two forms of sublime Mathematical and Dynamical, are extremely nuanced and cannot be fully addressed here. But, there are some important points that help lead to the Axis Theory’s understanding of the sublime. Kant begins his discussion of the sublime by claiming that the beautiful and the sublime agree with each other in that they both “please in themselves,” are “not dependent on sensation,” and are “universally valid for every subject.”[1] Importantly, this clearly aligns Kant’s view of the sublime along the Intellectual Axis. Kant does, however, distinguish between the beautiful and sublime in several important ways. Boundaries, for Kant, are a crucial aspect of beauty, while boundlessness is a component of the sublime.[2] In some ways, this understanding harkens back to Aristotle’s understanding of beauty in Poetics. Aristotle argued that:

Beauty is a matter of size and order, and therefore impossible either (1) in a minute creature, since our perception becomes indistinct as it approaches instantaneity; or (2) in a creature of vast size—one, say, 1,000 miles long—as in that case, instead of the object being seen all at once, the unity and wholeness of it is lost to the beholder.[3]

This comports with Kant’s idea of boundaries for beauty. So, one can easily imagine, though Aristotle never uses the term, that the sublime is that which is either too small or too large for perception. Aristotle’s understanding varies from Kant in a very important way though. To Kant, beauty is a “representation of quality” while the sublime is “that of quantity.”[4] Additionally, while Kant associates both beauty and the sublime with pleasure, beauty is associated with a positive pleasure while the sublime invokes a negative pleasure. This ties in with Burke’s notion of terror and horror as components of the sublime.[5]  Kant feels his most important distinction, though, is that beauty has a purposiveness while the sublime does not and as such does “violence to our imagination.” Since for Kant purposiveness connects to the “form and existence of an object”[6] it seems that the sublime’s lack of purposiveness may also connect to Burke’s notion of obscurity.[7]

Importantly, Kant believes that both beauty and sublime are universal but there is a tension in Kant’s expression of universality. As discussed earlier, Kant argues that beauty is subjectively universal, or that it is the judgment of beauty that is universal, seemingly implying that the locus of beauty is in the subject, not the object. However, Kant complicates this when he writes, “we express ourselves incorrectly if we call any object of nature sublime, although we can quite correctly call many objects of nature beautiful….sublimity…can be found in the mind.”[8] Here Kant seems to say that sublimity is clearly and totally subjectively universal but while beauty is subjectively universal there is something within the object that causes the object to be judged as beautiful. In other words, there is, for beauty, a tension between its subjectivity and its objectivity while no such tension exists in the wholly subjective sublime which is located only in the mind.

The original idea for the Axil Theory definition of sublime, that which when seen (perceived) elevates the content beyond the form, came from the Hegelian insight that in the sublime content is beyond form. But, this notion has great resonance with Kant’s refusal to link the sublime with objecthood and the location of the sublime in the content (subject) rather than the form (object). Kant flatly states that “no sensible form can contain the sublime.”[9] Another way of looking at this is that the sublime may be apprehended but not comprehended.

These characteristics can clearly be seen in the Bierstadt painting of Yosemite Valley discussed earlier. The large painting is of a massive seemingly incomprehensible space. The wild of nature is dangerous; but in the Burkian sense, it is kept at a safe distance. I question though Kant’s notion that the sublime does violence to the imagination. It seems that through its lack of purposiveness, it, in fact, excites the imagination. That which cannot be comprehended can only be apprehended through the exercise of the imagination. It may be even that the sublime does not lack a purposiveness but possesses a non-objective, even spiritual, purposiveness. For many, the sublime’s existence at the limits of or even beyond our understanding points clearly to divinity. What can more completely elevate the content beyond the form than the divine? The heart of the sublime may be the ineffable made manifest. The unbounded religious nature found in many Caspar David Friedrich paintings, such as Abbey in the Oakwood, speaks to this possibility.

But, unlike Burke and Kant, I do not see these paintings by Friedrich and Bierstadt as anything less than both beautiful and sublime. The sublime and the beautiful do not need to necessarily be set in tension. They can coexist. Unlike pretty and ugly they are not ontological opposites but differing intellectual judgments. This is why it is called the Intellectual Axis and not the Intellectual Continuum. It is not that sublime is necessarily greater and beauty lesser. Beauty is a judgment about intellectual delight while the sublime is a judgment about the content in relation to the form. Bierstadt’s content of Yosemite Valley clearly exceeds the form of painting. But, the painting is one that causes intellectual delight in the viewer and thus is both sublime and beautiful.

Jordan Wade’s painting Human Drapery 3 was discussed earlier as being both beautiful and ugly. I intimated that the painting may also be sublime. If the content of the painting is the dignity and brokenness of humanity then the content exceeds the form and this painting could rightly be considered beautiful, ugly, and sublime.

This essay is from our Anastasis Series where we resurrect articles from the past that are either still relevant today or can be easily updated. This piece was first published on May 9, 2014, and has been lightly edited and updated.