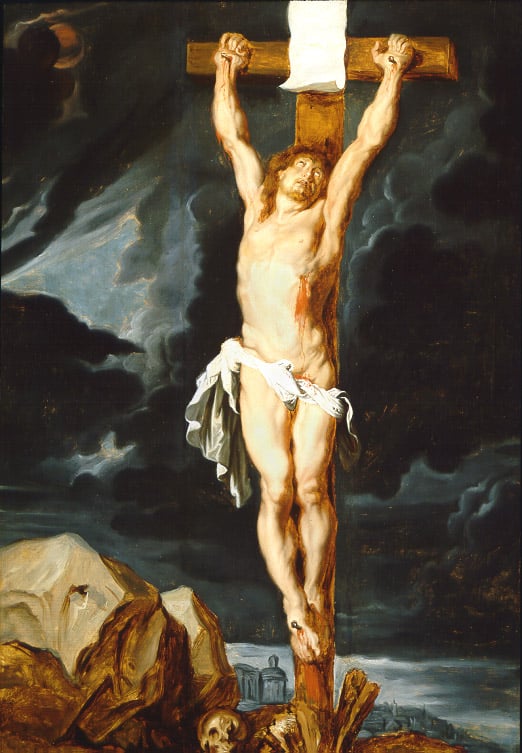 You may want to first read earlier parts of this series on The Five Evangelical Christs: The Introduction (Part 1) & Warner Sallman (Part 2)

This installment is a bit different than all the others in that Peter Paul Rubens is not a modern or contemporary artist. The question then becomes how does a four hundred year old painting by a Catholic artists fit into American evangelicalism?

The answer is actually found in the collection in which the painting currently resides. In the middle part of the 20th century, Bob Jones University, at the impetus of its President Bob Jones Jr., was one of the worlds greatest collectors of religious art. The bulk of the Bob Jones University Collection came from its inception in 1951 through 1968. In 1960, right in the middle of this growth period, Bob Jones Jr. acquired Peter Paul Ruben’s Christ on the Cross which is believed to be the modello that Rubens kept in his studio from which apprentices would work.

In Rubens’ painting, Christ is powerfully muscular and despite the blood spilling from his woulds and the tortuous piercing of the nails Christ remains in control. Consistent with Catholic pictorial tradition Christ is not overwhelmed by his pain and demonstrates a dignity transcendent of his agony.

For 53 years, this image has been on display on the Bob Jones University Campus. To the delight of some and consternation of others, BJU has been one of the most influential Christian Universities over the last 80 years and images like this do help develop a cultural ethos.

Christs victorious position here is powerful, especially considering the evangelical theology of the “finished work of the Cross” where Christ once and forever triumphed over sin. Art Historian David Steele wrote:

[Christ] suffers heroically, his muscles tense, his fingers clenched, and his arms raised above his head, thrusting his torso upwards. The image emphasizes the physical sacrifice which Christ suffered on the behalf of all mankind, yet his upward straining…suggests his ultimate triumph. The effect is powerfully dramatic and profoundly moving.

The tension between Christ sacrificing and Christ simultaneously achieving victory is evocative of the evangelical spirit. Evangelicals believe that humanity exists in a fallen world filled with pain and sin while believers have a settled fate. Despite their pain and challenges, believers are “not yet” and “already” victorious over sin because of their faith in Christ. This Rubens is consonant with the evangelical optimism that despite the trials of this world we are just passing through and ultimately there is victory in Jesus.