Op-ed: Can we talk about singing on airplanes? 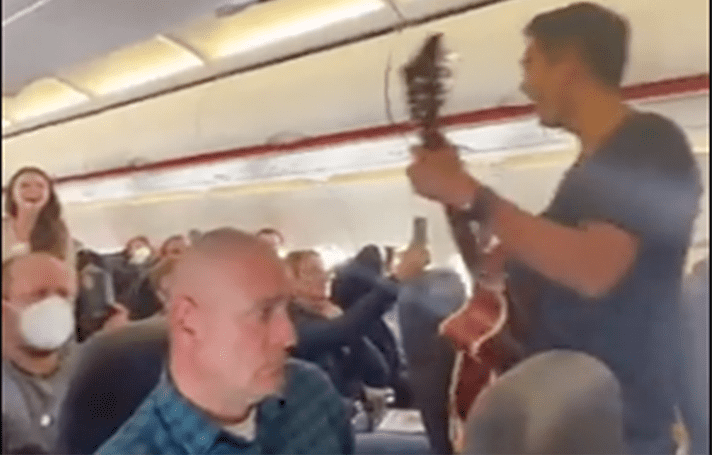 It was the song service heard around the Internet: “We are taking over this flight for Jesus.”

Philadelphia-based Christian evangelist Jack Jensz Jr. recently posted to Instagram a clip of himself and a few fellow passengers on an airplane flight singing the evangelical anthem, “How Great is Our God” somewhere mid-flight. The video had some steam, but it really blew up after Congresswoman Ilhan Omar tweeted the video with the comment, “I think my family and I should have a prayer session next time I am on a plane. How do you think it will end?”

I think my family and I should have a prayer session next time I am on a plane. How do you think it will end? pic.twitter.com/5696Erwsl5

The response, as is often true of Internet discourse, centered as much on Omar as on the actual video, with responses ranging from support to challenges, such as Congressional candidate Jose Castillo’s Tweet-retort: “In America, Muslims can & do pray in public. If she wants a country where Christians aren’t allowed to do the same @IlhanMN should go back to her own country.”

In America, Muslims can & do pray in public. If she wants a country where Christians aren’t allowed to do the same @IlhanMN should go back to her own country.

Nevermind the implicit anti-immigrant racism in the statement that assumes that America isn’t Omar’s country despite her having been a resident of the U.S. for three-quarters of her life and a citizen for more than half, that wasn’t what Omar said. She was — in the form of a sarcastic hot take — pushing back for a little introspection on the part of Christians publicly performing their piety. But rightly or wrongly, Omar is a polarizing figure and a lot of people are going to have a kneejerk reaction to anything she says. So perhaps it’s best to zoom out from a hard focus on her words.

Jenz has since explained that he got permission from the flight’s pilot and air host before performing, and even said that he wouldn’t have done so without that permission. He’s also said that he’s seen religious displays on other flights.

“It happens quite often. I think that we just shook the ground a little bit because it was a worship song. So it’s very out there in that sense. But I think that if you ask for permission and it’s granted and what you have to say is encouraging and uplifting and brings hope and light, sure! … We live in a beautiful, free country, and we’re free to express what we believe and what we stand firm on in our heart and if that’s bringing life.”

He also told The Christian Post that the unplanned worship service at 30,000 feet had no part of “a political agenda at all.”

“When she posted that, I just looked at it and I didn’t really give it too much thought. I didn’t really enter into any political debate,” he continued. “For us, we just came to share the love of God, we came just to reveal to people that Jesus loves them so much, and that’s our focus. Our focus wasn’t a political agenda at all.”

And therein is actually the problem. He didn’t really give it too much thought. Cultural critic Noah Berlatsky points out that, because the vast majority of Americans identify as some form of Christian, “public displays of Christianity are generally treated as wholesome, quintessential Americana,” while, “Non-Christian religions in the public sphere, in contrast, are often treated as curiosities at best and threats at worst.” He continues:

As a Jewish atheist who hates flying, though, I know how the impromptu concert would have made me feel. When I’m in the air, I just want to get where I’m going. I don’t want to listen to a mediocre chorus reiterating that my neighbors think I’m going to hell.

Christian worship is generally considered harmless, happy, uplifting — even good for you. Muslims in the U.S., in contrast, are regularly demonized and targeted with hate crimes. Post 9/11, airports and airplanes are especially Islamophobic spaces.

Christians’ seizing space, attention and power — that’s a normal, cheerful American tradition. As Omar rightly points out, Muslims’ doing the same thing, though, would be perceived by many as a threat.

Berlatsky also points out that, while many Christians are in theory accepting of a pluralistic society, that acceptance often comes with qualifications:

Radio host “Joe Pags” Pagliarulo demanded to know “why does this person who lives free and liberated because of the compassion of our country not appreciate that we’re a Judeo-Christian society uniquely founded to protect those of all faiths?” Many people criticized Omar for daring to question Christian behavior on Easter weekend — as if the holiday gives Christians carte blanche to all public spaces (and even though, according to Jensz’s Instagram post, the video was likely to have been shot days or even weeks before the holiday).

Jewish people aren’t generally seen as an active threat in the way that Muslims are in the contemporary U.S. As Pagliarulo’s comments indicate, we’re more often seen as junior partners in America’s “Judeo-Christian” society — we’re embraced as long as we let Christians do whatever they want on planes or elsewhere and as long as we don’t make a big display of our skepticism.

I am by no means opposed to public acts of worship. I lead worship in a local church most Sundays, and I love the liturgical theater of the processions that accompany Palm Sunday, Easter or other Christian holidays. Funerals, in many cases, are public acts of religious practice, as can be weddings. Evangelicals and others likewise have their own traditions that can be accomplished in public without being obnoxious. And on the flipside of that, even though I do find them odious, I affirm the rights of street preachers and musicians who set up in Walmart parking lots to play Gospel music to do so. (I also affirm the right of passersby to heckle them, turnabout being fair play.)

The difference in all of those circumstances from an airplane, however, is that anyone who sees or hears those public acts can walk away. In an airplane, you have a captive audience. I attended a Christian college that required chapel attendance, and one of the discussions we often had about chapel was the idea that coerced worship is not worship. (Some of the chapel services were downright weird; one of them featured the so-called “porn pastor” who has now turned to pot.) In the case of the airplane’s audience, you do see many people singing. You also see people laughing, rolling their eyes, grimacing and — in one case — trying his hardest to do a thousand-yard stare past the singer as he approaches.

So, the question of the praise service at 30,000 feet is not only about how the singing made those who participated feel, but if — by being forced to endure songs that they either didn’t believe or outright disagreed with — the non-Christian passengers walked away with more or less respect for Christians, or for Christ himself. As one social media user commented on Jensz’s original post: “I wouldn’t enjoy being trapped listening to any religious songs. It seems a bit tone deafness to assume people would be ok with that.”

In the case of songs, it isn’t the same as other public acts of worship committed on a plane; a Catholic can pray a rosary, a Muslim can say prayers, a Buddhist can chant to themselves — all without taking over or making a scene. Performing music, however, demands an audience.

I am going to assume that Jensz’s move was just what that social media user said, tone-deafness to his fellow passengers. But with this kind of thing, I also think of the words of someone who public preachers should keep in mind every time they take a stage: “And when you pray, do not be like the hypocrites, for they love to pray standing in the synagogues and on the street corners to be seen by others. Truly I tell you, they have received their reward in full. But when you pray, go into your room, close the door and pray to your Father, who is unseen. Then your Father, who sees what is done in secret, will reward you.”

Our answer to those words shouldn’t be, “But Lord, what if I find the highest street corner in the world?”

Vershal Hogan is Faith on View’s news editor and is a contributing essayist. He works as a journalist in Arkansas.