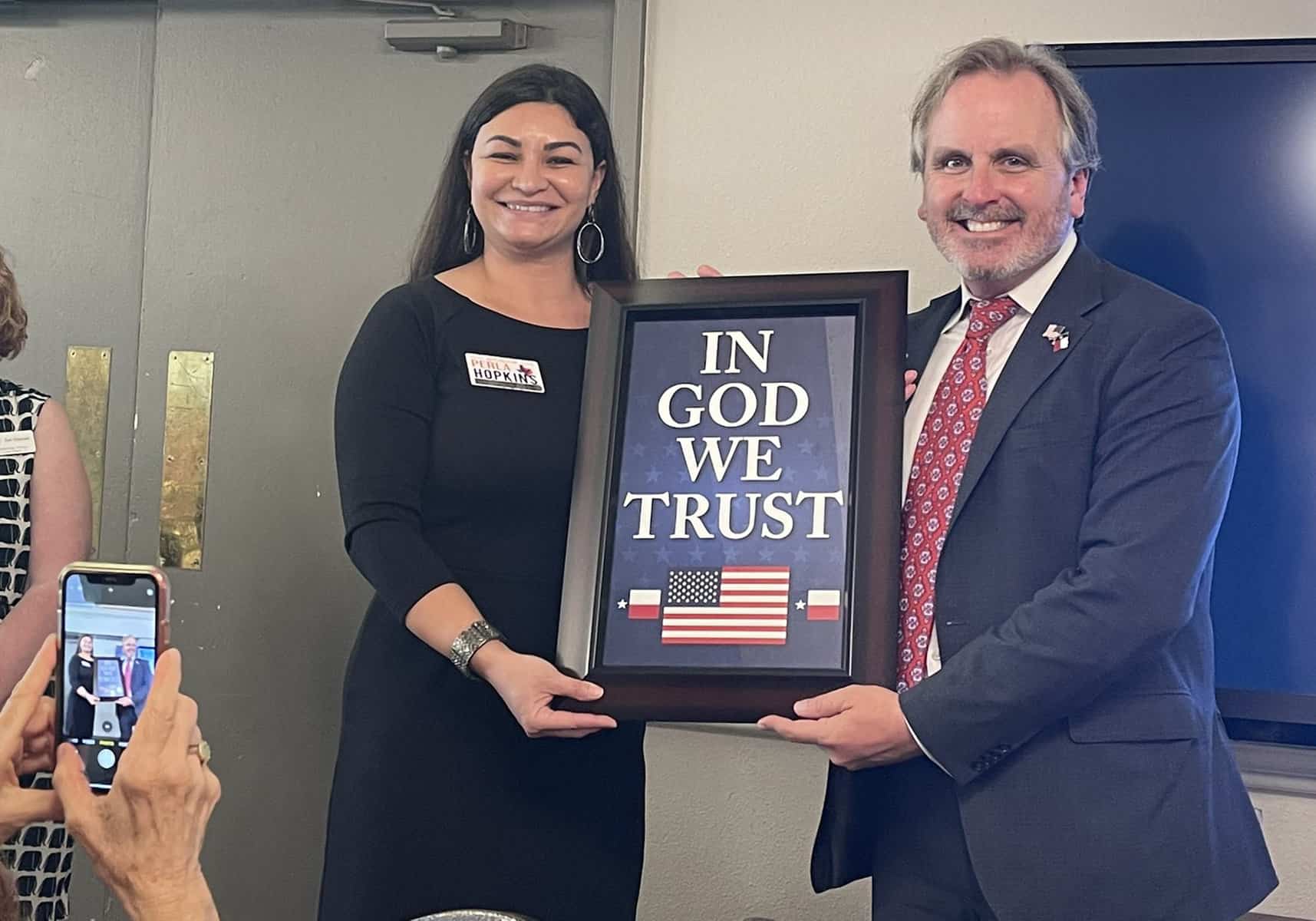 Some civil rights activists are worried that donor groups are using a Texas law to distribute posters to schools as a form of imposing religion on students.

The law in question requires that any public school — be it elementary, secondary or higher education — place the national motto, “In God We Trust,” in a “conspicuous place” in every campus structure if a poster or other presentation of the motto is donated to the school or “purchased from private donations and made available to the school or institution.” A key provision in the bill authorizing the donations is that the displays can’t come at a cost to the school district.

While the law hasn’t been on the books for very long, a recent donation of posters in a Dallas suburb has garnered attention as part of a larger push across the state. CNN reports:

The Carroll Independent School District in Southlake, a suburb of Dallas, on Monday received “In God We Trust” framed posters for each school in the district from Patriot Mobile, which describes itself as “America’s only Christian conservative wireless provider.”

Scott Coburn, the company’s chief marketing officer, told the school board, “Patriot Mobile is honored to donate these posters to CISD and we’re very excited to see them amongst all of our schools.”

The posters will be displayed in the front entrance areas of each Carroll ISD campus, Brandie Egan, the district’s communications coordinator, told CNN.

Patriot Mobile isn’t the only donor organization. In the Houston area, The Yellow Rose of Texas Republican Women donated a copy to every instructional school facility in the Cypress-Fairbanks Independent School district. Across the state, other groups have followed.

State Sen. Byan Hughes co-authored the law in 2003. On Aug. 16, he Tweeted, “The national motto, In God We Trust, asserts our collective trust in a sovereign God. I co-authored the bill in 2003 that allowed schools to display the motto, and last year I authored the “In God We Trust Act,” which requires a school to display the motto if there is no cost associated with the display. I’m encouraged to see groups like the Northwest Republican Women and many individuals coming forward to donate these framed prints to remind future generations of the national motto.”

…is no cost associated with the display.

I’m encouraged to see groups like the Northwest Republican Women and many individuals coming forward to donate these framed prints to remind future generations of the national motto.

While the national motto has been in place since it was authorized by Congressional resolution in1956 and has been printed on U.S. currency since 1957, it hasn’t been without challenges on First Amendment grounds. That’s a concern that Texas observers voiced again this month as the posters were distributed. The Guardian reports:

“These posters demonstrate the more casual ways a state can impose religion on the public,” Sophie Ellman-Golan of Jews for Racial & Economic Justice (JFREJ) told the Guardian. “Alone, they’re a basic violation of the separation of church and state. But in the broader context, it’s hard not to see them as part of the larger Christian nationalist project.”

The Southlake Anti-Racism Coalition (SARC) said they were “disturbed” by the precedent the posters’ distribution could set.

“SARC is disturbed by the precedent displaying these posters in every school will set and the chilling effect this blatant intrusion of religion in what should be a secular public institution will have on the student body, especially those who do not practice the dominant Christian faith,” the group said in a statement.

While the phrase does not explicitly mention any specific religion, many argue that “In God We Trust” has long been used as a tool to forward Christian nationalism.

Despite the challenge from some, however, not all non-Christian activist organizations are opposed to the placement. The Guardian continues:

Meanwhile, the Council on American-Islamic Relations (Cair), a Muslim civil rights organization, welcomed the initiative and said this might allow for an opportunity for students to learn about other faiths.

“The notion of trusting God is common across faiths,” a Cair spokesperson, Corey Saylor, told the Guardian. “Applied through that lens, the posters can foster discussions among Texas students about their various faiths and enhance understanding.”