This page is a tribute page to Cruz and Jeannene Reynoso, my parents. Cruz Reynoso was a civil rights activist and lawyer who was the first Latino appointed to the California Supreme Court, vice-Chair of the U.S. Civil Rights Commission, and awarded the Presidential Medal of Freedom from President Bill Clinton.

Cruz and Jeannene came from very similar backgrounds. Cruz was born and raised in southern California when Orange county was an agricultural area. His father, Juan, was a farm worker and the family often worked on farms over the summer when Cruz was young. Jeannene was born in Detroit and was somewhat of a street kid while her parents both worked. But she, and her siblings, were sent to live in the Appalachian hills of Tennessee with her grand parents and were eventually joined by her parents. Cruz and Jeannene often spoke about how the Chicano culture of Southern California and the Hill Billy culture of northeastern Tennessee were so similar as they were rooted in impoverish, marginalized communities which resulted in similar values.

After high school, Cruz attended Fullerton College then Pomona College prior to joining the army. Jeannene finished high school and worked locally in Scott County Tennessee until she was recruited to work in the FBI secretarial pool. While in the Army, Cruz worked with the counter intelligence core and was stationed in Washington, D.C. Cruz and Jeannene met while living in the same Washington area housing facility.

Cruz returned to California in 1955 to attend Law School at the University of California at Berkeley. They were married in 1956 in Tennessee by Jeannene's grandfather, a southern preacher. After, graduating law school in 1958 they lived in Mexico City for a year while Cruz studied constitutional law on a Ford Foundation Scholarship.

In 1976, Cruz and Jeannene moved with their four children to their long time family home in rural Northern California. The family was raised on these 30 acres managed by Jeannene. For over 40 years, this home was the center of Reynoso family life.

Cruz spent a sixty year career as a lawyer, jurist, and civil rights activist which brought him diverse experiences. But, at the root of his career was a commitment to social justice. He would often say that social wrongs would cause his "Justice Bone" to hurt. Whether advocating for the Chicano community or the poor, he worked toward equality of opportunity economically, socially, politically, and educationally.

Jeannene's commitments were similar but is far less public. She poured her life into her children, her church, and her community. She sought the betterment of each of these groups. "Nana" was adored by her grand children who she often babysat or took on vacations. She was a quiet pillar of the small country church in which she spent decades. And her quiet commitment to the community helped rebuild parks, contributed to schools and community organizations, and even provided Christmases for those who were without.

Jeannene passed away from breast cancer in 2007. In 2018, Cruz left public life after he was diagnosed with Alzheimer's and Parkinson's diseases.

Mom and Dad when Dad Graduated Law School in 1958.

Mom and Dad when Dad received the Hispanic Heritage Award.

The ranch home where Mom and Dad raised their children and was home base for the family for over 40 years.

What I Learned from Mom and Dad

When my parents celebrated their 50th anniversary, we held an event for them at our small country church. As part of that celebration, I wrote the statement below. I was asked to write a little something about what I had learned from my parents.

What I learned from Mom and Dad:

From Mom, I learned as long as I stay with the Bible I will be okay. Everything of eternal importance is there. If nothing else, we can count on God’s love and the truth of his Word.

From Dad, I learned to follow my passion. Our world is so much about comfort but Dad lives his passion.

From both Mom and Dad, I learned that if you have anything to share you have enough to share and it is my responsibility to share it.

From Mom, I learned to share my time. She always has the time to help and for me there have been times when all I had to offer was my time.

From Mom, I learned that guests need food.

From Mom, I learned that Children are a blessing.

From Dad, I learned to do right despite the consequences.

From Dad, I learned that might does not make right. In fact, sometimes might forgets all about the concept or right.

Form Mom, I learned to brush my teeth. My teeth thank her.

From Dad, I learned that there is more to look forward to in life than retirement.

From Dad, I learned to question. There are often different ways of looking at things and the other way usually is not as stupid as we think it is. If what we believe is true, it can handle the questions.

To Mom’s chagrin, I learned from Dad that they make scooters that can go on the freeway and get great gas mileage.

From Mom, I learned about every person she has ever known who has been hurt on a motorcycle. Now, I have to be careful or she will think that I wasn’t listening.

Finally and maybe most importantly from Mom I learned that you never say “for you and I.” 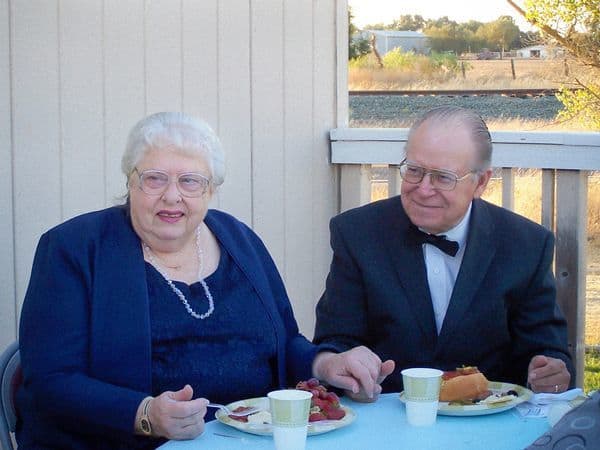 Mom and Dad (Jeannene and Cruz) at their 50th anniversary celebration.

Essays, on this site, about Cruz and Jeannene

Pieces on other sites

Cruz Reynoso recalls his days working alongside Cesar Chavez in the Community Service Organization and speaks to the influence of Latinos today on immigration, voting rights, police conduct and other contentious public issues. Justice Reynoso is presented by the Helen Edison Lecture Series at UC San Diego.

Cruz Reynoso discusses his life and career for the University of Pennsylvania Carey Law School.

The National Hispanic Hero Award is a testimonial, a recognition of contributions made by extraordinary individuals who have unselfishly given of themselves in a lifetime of dedicated service to the Hispanic community of the United States. Cruz Reynoso was the 2014 recipient of the National Hispanic Hero Award. The United States Hispanic Leadership Institute presents this award at their yearly national convention in Chicago.

2018 Blaisdell Distinguished Alumni Award winner and former California Supreme Court Justice Cruz Reynoso engages in a conversation about his distinguished career in law, public service and education, culminating with his receipt of the Presidential Medal of Freedom by former President Bill Clinton in 2000, and the Hispanic Heritage Foundation Award in Education the same year. Reynoso is joined by Kelly Ragsdale ’18, a history major who has worked extensively with Reynoso on his biography and life story, an exploration that began as a Pomona Summer Undergraduate Research Project (SURP) in 2016

During his extraordinary life, Cruz Reynoso has been one of those rare individuals who are not only shaped by history, they make history. As a child of farm workers, Reynoso felt the sting of injustice, and later as a lawyer, and then the first Latino to sit on the California Supreme Court, he used his "justice bone" to eradicate discrimination and inequality in an effort to make the promise of the American dream a reality for all. CRUZ REYNOSO: SOWING THE SEEDS OF JUSTICE is a compelling portrait of one of America's unsung heroes and the turbulent times in which he lived.

Sowing the Seeds of Justice can be rented or purchased at Vimeo.

The Internet of Experiences: Listen to the Message from the Cruz Reynoso Task Force

We retrieved, displayed and shared a short video about the Reynoso Task Force findings from an RFID tagged pamphlet. This video was filmed on scene in Woodland, CA. Former State Supreme Court Justice Cruz Reynoso presented the Vanguard Youth Social Justice Award to the UCD students who were pepper sprayed or arrested on the UC Davis Quad November 18, 2011.

CUS Bakersfield 28th Annual Charles W. Kegley Memorial Lecture, "Sowing the Seeds of Justice: the Central Valley 75 years after the Grapes of Wrath.

There are some issues that people with opposing views may never agree on, particularly when one group has significantly more power than the other. But sometimes when an issue is brought to authority figures’ attention, they can be convinced to do the right thing, says Cruz Reynoso, a former California state supreme court justice. In this episode of the Asked and Answered: Lived and Learned series, Reynoso discusses how his father's philosophy as a farmworker inspired him as a labor rights advocate and attorney to always fulfill his own obligations, and to ask those in power to fulfill theirs as well.

Cruz Reynoso speaks of his experience on the Rosenberg Foundation Board.

Searching for Democracy: In the Past - An Engaged Society

University of Maine Law- The Honorable Cruz Reynoso, University of California, Davis School of Law A former Associate Justice of the California Supreme Court, Reynoso is recognized for his leadership in civil rights, immigration and refugee policy, government reform, the administration of justice, legal services for the indigent and education.

Artists Round Table: A View from the Bench: Social Justice in Art, Law, and Religion of the Chicano Community

An Artists Round Table concluded an exhibit featuring drawings made by Cruz Reynoso on his case notes while serving on the California State Supreme Court, as well as works by other Chicano artists in the Bay Area. The exhibition was curated by Rondall Reynoso and ran from June 19 through September 21, 2018. The event was held at Graduate Theological Union on September 20, 2018.

Thirty Years After a Hundred Year Flood: Judicial Elections and the Administration of Justice

Minority Corporate Counsel Association- MCCA’s 2014 Lifetime Achievement Award honoree is Justice Cruz Reynoso. Justice Reynoso is the first Latino Associate Justice on the California Supreme Court (1982-1987) and is currently a professor emeritus of law at the University of California, Davis.

President Clinton awarded presidential medals of freedom to several citizens, including Cruz Reynoso, for their work in behalf of peace and democracy both in the U.S. and overseas. The accommodation for Reynoso begins at 45:22.

A variety of C-Span videos featuring Cruz Reynoso can be found HERE.

I'm Mexican American, I was a Judge. What Trump is doing is appalling.

The people of the United States are increasingly diverse in our religious, ethnic and racial backgrounds. While we still struggle with discrimination, we have learned to live respecting one another.... READ ARTICLE

California Or A Third World Country?

We’re in the midst of a hot, dry summer. While you’re thinking about how you’ll cool off, consider this: four times more Californians than the entire population of Flint, Michigan do not get clean, safe water from the tap in their homes...
READ ARTICLE

A wispy-haired octogenarian tried to slip quietly into Sacramento City Hall last week only to be greeted by a bold, brassy blast from a mariachi band and a crush of adoring fans.... READ ARTICLE

The award-winning documentary Cruz Reynoso: Sowing the Seeds of Justice is airing on public television until October 15th in honor of Hispanic Heritage Month.... READ ARTICLE

Cruz Reynoso Was Swept Off the State Supreme Court With Rose Bird, but Now He’s Found New Causes and a New Career

* This resume and is built off an abbreviated resume which Dad kept and internet research. I am sure there is plenty that belongs on this page that I do not yet know about. With that in mind, if you have content that you think should be added to this page reach out and let me know.