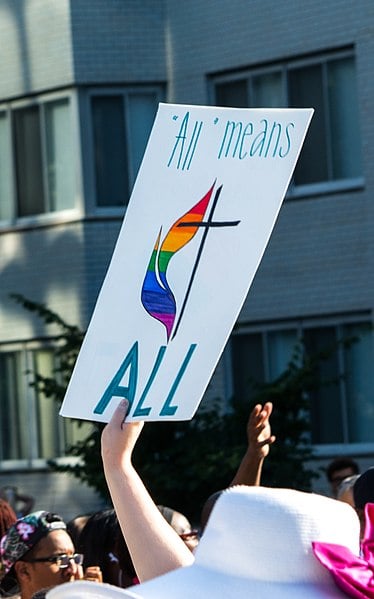 Emily McFarlan Miller of Religion News Service writes that the original agreement to split the United Methodist Church has collapsed. COVID-19 continuously delayed the implementation of their Protocol of Reconciliation & Grace Through Separation, and politics complicated the issue.

Traditional, centrist and progressive factions within the church have been in disagreement for decades. LGBT inclusion was one of the biggest points of contention in the Methodist Church after a 1972 vote declared the practice of homosexuality incompatible with the church, much to the chagrin of LGBT members.

The Protocol of Reconciliation & Grace Through Separation, brokered by 16 United Methodist bishops and advocacy group leaders from across theological divides, outlined a plan to split the mainline Protestant denomination over its disagreement about the ordination and marriage of LGBTQ United Methodists.

But before delegates to the General Conference, the denomination’s global decision-making body, could vote on the widely endorsed protocol, so-called traditionalists went ahead and launched a new denomination, the Global Methodist Church.

And, most recently, several representatives of groups identifying as centrist and progressive announced they no longer supported the protocol.

While legislation to enact the plan still likely will be considered at the next General Conference meeting, wavering support for the protocol leaves the United Methodist Church either imagining a new way forward or plunging into chaos, depending on whom you ask.

“There’s a lot that’s happened since that protocol was signed, and the context really has changed,” said Bishop Thomas Bickerton of the New York Annual Conference, who recently became president of the denomination’s Council of Bishops.

“We’re sad about these departures that are happening, but to think that the protocol is going to be the great solution, I don’t know that it will, because it’s in the hands of these delegates who are going to amend it and change it and make it what they want.”