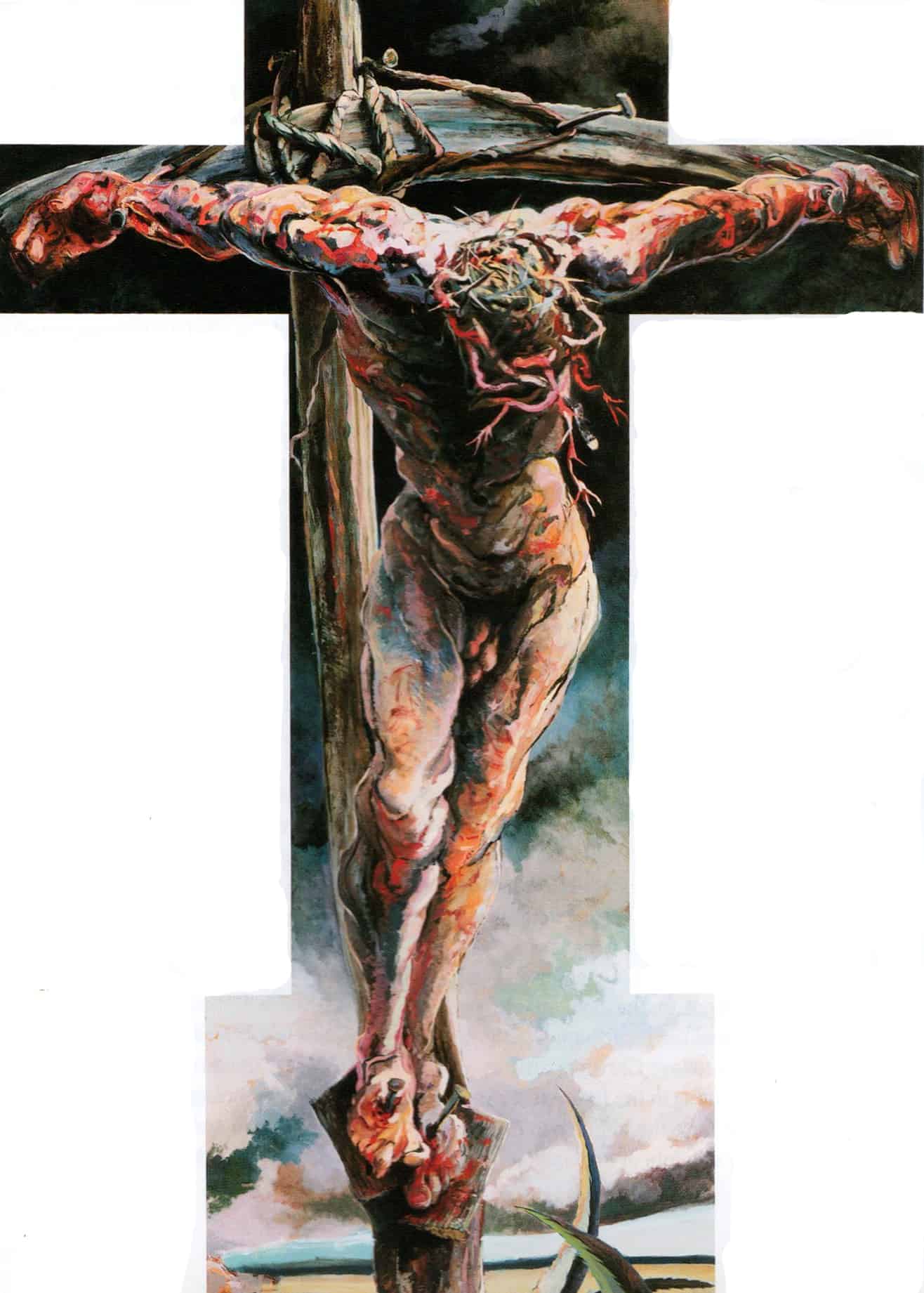 If you are new to this series you may want to go back to Part 1 to better understand the project I am undertaking.

Edward Kinppers is the first contemporary artists I am looking at in this series. For several decades, Knippers has been among the most prominent evangelical artists in the United States. But, during his career he has also been a controversial figure. In 1983, Knippers began working exclusively with images of Biblical scenes. These scenes have been painted with all participating figures in the nude. The nudity in Knippers work has been cause for attacks against his work on several occasions. When Knippers exhibited his work at Huntington College the College administration in the face of protests reluctantly closed the exhibition. When his work was exhibited at Covenant College the it was actually slashed by a vandal who claimed that Knipper’s work “made the Old and New Testaments into a nudist colony.” Within the secular art world his work has also been castigated for being too Biblical.

It is important to note that Knippers’ work, unlike much contemporary art, is not seeking a shock value or trying to be controversial for the sake of controversy. Knippers sees the nudity as an integral part of his artistic and spiritual statement. At the heart of Edward Knippers’ theology and art is the Incarnation. he views the Incarnation as proof that the body is the meeting of heaven and earth. The body of Christ in  all its brokenness is essential because without it, Knippers contends, Christ’s sacrifice would not be complete. Without the broken body of Jesus there can be no redemptive resurrection.

Further, Knippers paints his Biblical figures in the nude because he is striving to avoid cultural trapping such as clothes that tie the images to a particualr time and place. he is reaching for a spiritual timelessness. Theologian David Buschart argues that “By omitting dress, Knippers deftly brokers the challenge of both the universality and the particularity, for the absence of dress in his human figures removes an excuse for someone to hold the images at a distance, and yet these are particular people.” For Knippers, the human body is the common element that binds us together throughout time.

Knippers work has been generally accepted within evangelical intelligentsia. Knippers work powerfully speaks to doctrines which are the very core of Christianity. However, evangelicalism has strong pietistic roots and the nudity, physicality, and violence in his work push uncomfortably against those cultural evangelical mores. Knippers argues that evangelicals fail to have a proper understanding of the body in two ways:

The Sacrifice painted by Knippers in 1986 was at one point displayed in his church on Good Friday. Some members of the congregation found the work incredibly moving but others were so disturbed by the work that they refused to even enter the sanctuary.  One woman wrote the pastor to complain about the work but in the very same letter conceded that the painting forced her to reexamine her image of Christ as and infant. It forced her to allow Jesus to grow up. Knippers also tells a powerful and personal story about this painting:

The work was also influential for my godchildren’s father in explaining the meaning of Easter to them. He was trying to use Sunday School literature, most of which is sentimental almost to [the] point of heresy, but the children just could not understand. He then remembered that he has a catalogue of my work, with this crucifixion. When the children saw this image, one of them blurted out. “Oh, He really died.”

Knippers work finds its place at the tension between the support of evangelical theology and the discomfort of evangelical culture. Those who support his work often point to the value of incarnational theology, the truth the violence of his work, and the necessity off understanding the joint universality and particularity of the Christian message. On the other side, those who find problems with Knippers work tend to find the nudity problematic and the violence distasteful.

As I was writing this article, my 8 year old daughter came up to my computer and saw The Sacrifice.  I think our conversation was telling.

“Gross!” she said with her face all gnarled up.

“It is supposed to be gross He is on the cross dying.”