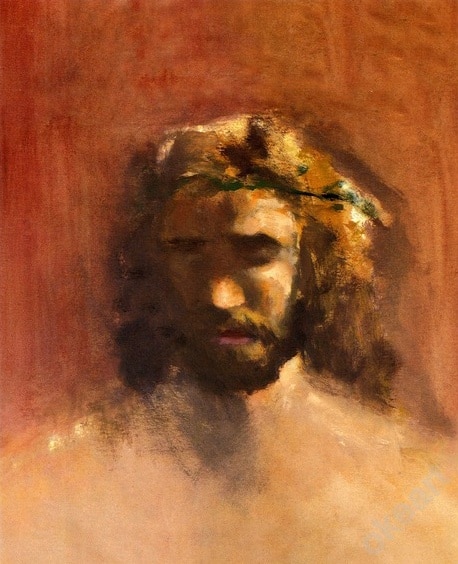 To fully understand the context of this series, you may want to read Part 1.

Thomas Kinkade (1958-2012) is simultaneously the most praised and most castigated Christian artist of our time. During his life, he was, monetarily speaking, among the most successful living artists of all time. Kinkade claimed to be the most collected living artist. However, despite his wide spread popular success he was never fully accepted by the art world, neither secular nor religious.  His controversy only grew after his death when the demons of his personal life became public.

For many evangelicals, Kinkade’s work has a powerful resonance. Embedded deep in his work is a nostalgia similar to what was discussed with Warner Sallman’s Head of Christ. Kinkade is best known for his idealized cabins with a warm light radiating from within. But, he is also known for quaint Main Street scenes, serine light houses, and even street scenes from major cities painted in a way which evokes a bygone era. His most known religious works are churches. His churches are typically country churches which, like his cabins, are set in idealized bucolic scenery with warm light shining from within.

Given Kinkade’s public Christianity and the fact that every painting he produced was signed with not just his signature but the Ichthys (fish symbol) and the Biblical citation “John 3:16,” it is easy to view his churches as religious statements. They likely were. In fact, it is probably best to interpret all of his art as a religious statement. However, it is interesting that he produced very few Christocentric images. The first Christocentric print released by Kinkade was The Prince of Peace released in March 1999. According to Kinkade this image is based on a vision he had  in 1980 while in art school and shortly after coming to faith. The piece evokes both a very personal feel through the loose handling of paint, the intimate pose of Jesus, and the way the style and subject of the painting contrasts with Kinkade’s oeuvre. Kinkade’s career was characterized by a strong commercial drive including massively reproduced prints, commemorative tchotchkes, housing developments, and Disney themed paintings. But, this piece contrasts with all that. It does not fit well with his signature style and is more about the spiritual peace evoked both in Jesus’ countenance and in the title of the work. However, this work is an outlier in Kinkade’s career and only shows a portion of Kinkade’s view of Christ.

In December 1999, Kinkade released a Christocentric painting which fits more comfortably within his body of work, Sunrise. I first ran across a print of this painting in the lobby of a large church in Louisiana. The pastel tones of the  sunrise are reflective of Kinkade’s broader pallet and paintings composition hearkens back to romantic painter Caspar David Friedrich just as other paintings by Kinkade often evoke J.M.W Turner, John Constable, or Albert Bierstadt. However, what ties this painting into Kinkade’s oeuvre as much as anything is the marked sentimentality of the painting. Rather than depicting the pain and suffering which the cross evokes for an artist like Edward Knippers or even the sublimity which Friedrich evoked in his paintings of Christ on the cross on a hill, Kinkade depicts the quintessentially protestant empty cross as a sign of the resurrection. The title is potentially even a play on words referencing both the event of Easter morning and the time of day. But, this interpretation creates a tension with Kinkade’s stated purpose of painting as if there were no fall. Without the mark of original sin the image of the cross loses its potency. It becomes a symbol for God and Christianity, an  image of grace. But, a grace which saves humanity from what? The hill on which Kinkade’s cross rests is not Golgatha (the place of the skull) on which Jesus was crucified just outside Jerusalem but a beautiful coastal hill more like Bierstadt’s vision of the new Eden  in California than the solemn  hills of Friedrich. In fact, despite the  compositional similarity to Friedrich it is probably best to view this painting as a part of Kinkade’s Edenic vision.

A later painting by Kinkade, The Cross released April 2010, takes the cross on a hill but sets it in a space more reminiscent of Thomas Cole and the Hudson River School. This move more directly merges the Edenic vision of Kinkade with the patriotism often found in his post 9/11 work. The American landscape which functioned both as a point of national pride and spiritual reflection for many 19th century artists serves a similar function for Kinkade in this work. Like 19th century landscape painters Kinkade shows an unspoiled dynamic landscape. But for Kinkade, this landscape is not only pure and unspoiled by western industrialization it is pure and unspoiled by sin. There has been no fall. Eve and Adam left the fruit of the Tree on the Knowledge of Good and Evil on the branch. This, again, creates an unresolved tension between the cross as a symbol of pain and redemption with a landscape that is pain free and unmarked by moral brokenness. The definitive article “the” in the title further complicates the issue by implicitly tying this cross with The Cross of Christ rather than just a cross.

Kinkade’s fourth and final Christocentric image was released in April 2011 just a year before his untimely death. This final image shows Peter carrying the “symbolic key’s to God’s kingdom” while walking and talking with Jesus. The two figures stroll through a typical Kinkadian landscape replete with colorful trees and flowers, waterfalls, a babbling brook, a bridge, and a foot path. In many ways, this image fist more comfortably in Kinkade’s oeuvre than any of his other pictures discussed here. In some ways this painting returns to the more personal feel found in The Prince of Peace. Viewers can relate to the relational experience of walking and talking with a friend and evokes a strong nostalgia. Yet, despite the sense of familiar there is also an estrangement of the viewer from the subject. The idealized image reflects more a dream or longing than any actual event. The life of humanity is filled with pain and suffering while this image is devoid of either.

There is no artist who has been more broadly accepted and acclaimed by evangelical culture than Kinkade. While some sneer at his artistic output there is no denying that it resonates strongly with a large portion of the evangelical church. Daniel Siedell writes convincingly but caustically about Kinkade’s work in his article, “The Dark Light of Thomas Kinkade.” Siedell is dismissive of Kinkade’s artistic merit and castigates the theological influence of Kinkade as “not merely problematic, it is dangerous.” he further writes, “Kinkade’s work is the meticulously painted smile on the Joker’s disfigured face. It refuses to deal with the fallenness, brokenness, sinfulness of the world.” Siedell’s writing on this subject produced significant controversy. Yet, despite how one feels about the theological implications of  Kinkade’s work there is some truth when Siedell writes “Kinkade’s images prey on his audience’s preconceptions, expectations, and presumptions, restricting rather than broadening or deepening their experience.” For Siedell, this is clearly a pejorative statement but the same argument can be made in a positive light. One can argue that Kinkade uses our preconceptions, expectations, and hopes to provide a comfortable and comforting experience. While this claim has a different moral tone it is essentially the same claim as Siedell’s.

Kinkade’s work lays hold of the nostalgic longing for a simpler time, a purer time and provides a visual voice for that longing. That is exactly the feeling many evangelicals long for in their religious experience. One can imagine looking at Walk of Faith while singing quietly “Jesus loves me this I know for the Bible tells me so…” Similarly Contemporary Christian Music is often maligned for sounding like love songs sung to Jesus. That emotional power and connection is exactly what Kinkade delivers in his art.