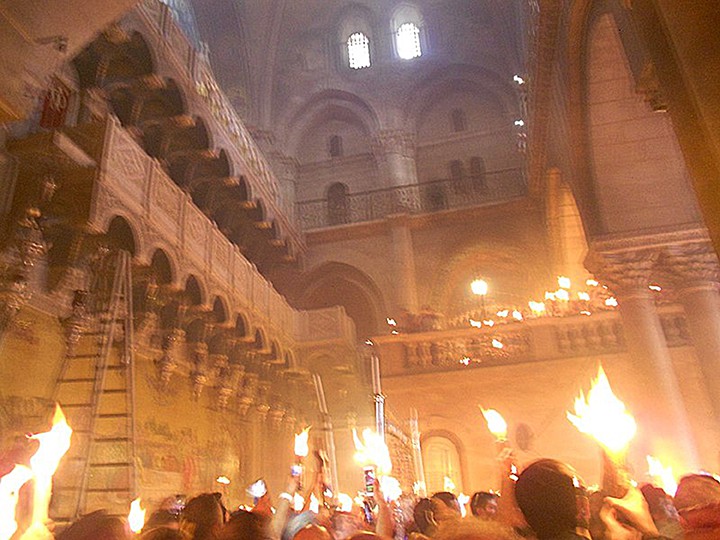 The political situation in Jerusalem has been sticky — and outright violent, in some cases — in recent weeks, but the Church of the Holy Sepulcher still hosted the annual Holy Fire in conjunction with Pascha, sometimes called “Orthodox Easter.”

The ceremony was conducted by lighting candles around the Holy Edicule, the tomb of Jesus Christ.  Christian tradition says the burial and resurrection of Jesus Christ took place at the site where the church is built. OrthodoxWiki explains the Holy Fire:

The Holy Fire (Greek ‘????? ???, literally “Holy Light”) is a miracle that occurs every year at the Church of the Holy Sepulchre in Jerusalem on Holy Saturday, the day preceding Pascha. It is considered by many to be the longest-attested annual miracle in the Christian world, though the event has only been documented consecutively since 1106. In many Orthodox countries around the world the event is televised live.

The ceremony begins at noon when the Patriarch of Jerusalem or another Orthodox Archbishop recites a specific prayer. The faithful gathered will then chant “Lord, have mercy” (Kyrie eleison in Greek) until the Holy Fire descends on a lamp of olive oil held by the patriarch while he is alone in the tomb chamber of Jesus Christ. The patriarch will then emerge from the tomb chamber, recite some prayers, and light either 33 or 12 candles to distribute to the faithful.

The fire is also said to spontaneously light other lamps and candles around the church. Pilgrims say the Holy Fire will not burn hair, faces, etc., in the first 33 minutes after it is ignited. Before entering the Lord’s Tomb, the patriarch or presiding archbishop is inspected by Israeli authorities to prove that he does not carry the technical means to light the fire. This investigation used to be carried out by Turkish soldiers.

The Holy Fire is first mentioned in the documents dating from the 4th century. A detailed description of the miracle is contained in the travelogue of the Russian igumen Daniel, who was present at the ceremony in 1106. Daniel mentions a blue incandescence descending from the dome to the edicula where the patriarch awaits the Holy Fire. Some claim to have witnessed this incandescence in modern times.

This year’s ceremony took place amidst new restrictions imposed by Israel regarding attendance for ensuring safety.

Thousands of Christians have celebrated the traditional “Holy Fire” ceremony of blazing candles at the Holy Sepulchre church, Christianity’s holiest site in Jerusalem, to mark the eve of Orthodox Easter.

This year major Jewish, Christian and Muslim holidays have converged against a backdrop of Israeli-Palestinian violence. More than 150 Palestinians have been injured in the Israeli raid of Al-Aqsa compound – Islam’s third holiest site.

This year, joyous, shouting faithful crowded together unmasked, holding aloft wads of thin candles bound together to produce thick orange flames that danced inside the darkened Church of the Holy Sepulchre.

The church is built on the site where according to Christian tradition Jesus was crucified, buried and resurrected.

Israel’s foreign ministry gave a crowd estimate of thousands, who celebrated in a tense Jerusalem in the wake of Israeli soldiers attacking worshippers at Al-Aqsa compound on a near-daily basis.

The Church of the Holy Sepulchre and the rest of the Old City lies in East Jerusalem, occupied and later annexed by Israel following the Six-Day War of 1967.