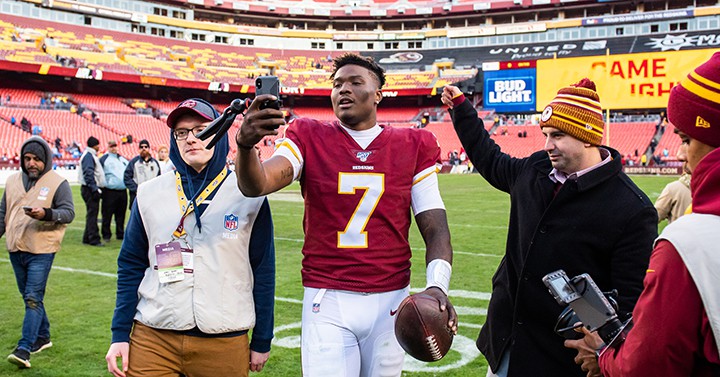 Dwayne Haskins is being remembered for more than just his football game.

The late Pittsburgh Steelers quarterback, who had also played for the Washington Football Team, died Saturday after he was struck by a dump truck near an Interstate highway in South Florida.

During his college days, Haskins and Alabama’s Tua Tagovailoa’ were known to text each other Bible verses even as they both contended for the Heisman trophy. CBN News reports:

And once he got to Washington in the NFL, Decision magazine reported that Haskins liked “to quote Jeremiah 29:11; Joshua 1:9; Philippians 4:13, and closest to his heart, he says, is Isaiah 12:2: “Surely God is my salvation; I will trust and not be afraid. The Lord, the Lord himself, is my strength and my defense; he has become my salvation” (NIV).

“I want to use my platform, use my place in this world right now as a way to benefit and inspire others, and give back to the community, and be someone that they look up to,” Haskins said. “That is something I feel like God would want for me to do.”

And on Thanksgiving Day 2020, Haskins tweeted about his own thanksgiving- for God’s gift of salvation:

“Gods grace has saved you because of your faith in Christ. Your salvation doesn’t come from anything you do. It is gods gift. – Ephesians 2:8

Gods grace has saved you because of your faith in Christ. Your salvation doesn’t come from anything you do. It is gods gift. – Ephesians 2:8
Thankful, Happy thanksgiving ??

The Florida Highway Patrol has not disclosed many details about Haskins’ death at this time, only that he was struck while walking in the area and that he was pronounced dead on the scene at Interstate 595.