Their school hosted a revival, so they staged a walkout 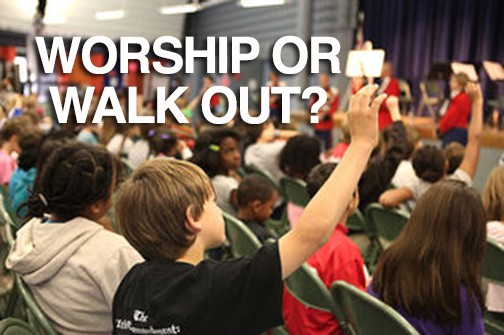 Students in a West Virginia public school were recently instructed to take time out of their day to attend what has been described as “an evangelical Christian revival assembly.”

In response, the students staged a walkout of the school the following day.

The Associated Press reports about the assembly:

When students arrived at the event in the school’s auditorium, they were instructed to close their eyes and raise their arms in prayer, Mays said. The teens were asked to give their lives over to Jesus to find purpose and salvation. Those who did not follow the Bible would go to hell when they died, they were told.

The Huntington High School junior sent a text to his father.

The answer, according to the U.S. Constitution, is no. In fact, the separation of church and state is one of the country’s founding basic tenets, noted Huntington High School senior Max Nibert.

“Just to see that defamed and ignored in such a blatant way, it’s disheartening,” he said.

The revival, which was organized by the school’s Fellowship of Christian Athletes, was reportedly staged during a non-instructional period of the school day. School officials said, however, that two teachers “mistakenly” took their entire class to the event.

“It’s unfortunate that it happened,” [Cabell County Schools spokesperson Jedd] Flowers said. “We don’t believe it will ever happen again.”

In at least one case, a Jewish student apparently tried to leave the assembly and wasn’t allowed to do so.

Bethany Felinton said her Jewish son was one of the students forced to attend the assembly at Huntington High. She said that when he asked to leave, the teacher told him their classroom door was locked and he couldn’t go. He sat back down in his seat, uncomfortable. Felinton said he felt he couldn’t disobey his teacher.

“It’s a completely unfair and unacceptable situation to put a teenager in,” she said. “I’m not knocking their faith, but there’s a time and place for everything — and in public schools, during the school day, is not the time and place.”

The speaker at the event was Nik Walker, a 25-year-old preacher, who says as many as 200 students have been baptized at the nearby Christ Temple Church, who  asked, “students that if they believe everything in the Bible is true, ‘then you must also believe the parts about judgment, about heaven and hell,’” the Washington Post reports.

The next day, Mays recorded a teacher’s apology to the classroom for what she framed as being a misunderstanding of what the assembly entailed.

“I want to apologize to you when we went to the auditorium yesterday,” the teacher said. “I was not familiar with the people associated with the Christian athletes. I thought they would be discussing choices and goals with you. I should have had us leave, but I did not want to be rude.”

Students decided to stage the walkout after there were apparently very few public consequences. The district barred members of the press from directly covering the walkout, but as part of it students gathered approximately 75 signatures petitioning the Cabell County Board of Education to apologize. The Post reports that the petition also sought for the school board to review policies about religious speakers on school grounds.