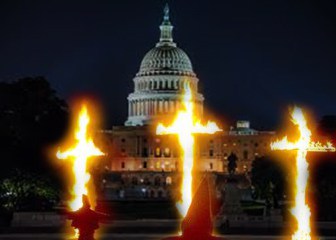 A group of Evangelical leaders has released an open letter denouncing the role of  Christian nationalism in the United States’ current political climate and urging faith leaders, “to engage pastorally with those who support or sympathize with these groups.” They noted especially the number of Christian symbols that were displayed as the mob attacked the U.S. Capitol in January, an event that left five people dead. NPR reports:

In an open letter, more than 100 pastors, ministry and seminary leaders, and other prominent evangelicals express concern about the growing “radicalization” they’re seeing, particularly among white evangelicals.

The letter notes that some members of the mob that stormed the Capitol carried Christian symbols and signs that read, “Jesus Saves,” and that one of the rioters stood on the Senate rostrum and led a Christian prayer. The letter calls on other Christian leaders to take a public stand against racism, Christian nationalism, conspiracy theories and political extremism.

The statement, which is available online and invites readers to sign on to show their support for its message, begins, “As leaders in the broad evangelical community, we recognize and condemn the role Christian Nationalism played in the violent, racist, anti-American insurrection at the United States Capitol on Jan. 6.” Calling Christian Nationalism “a version of American nationalism that is trying to camouflage itself as Christianity,” the signatories said it was a heretical version of the faith. The letter said the current moment is similar to historical events that warranted Church councils. It continues:

Just as many Muslim leaders have felt the need to denounce distorted, violent versions of their faith, we feel the urgent need to denounce this violent mutation of our faith. What we saw manifest itself in the insurrection at the Capitol on January 6, 2021, is a threat to our democracy, but it is also a threat to orthodox Christian faith. The word “Christian” means “Christ-like.” As leaders in the Church, we do not agree on everything, but we can agree on this — Christians should live in a way that honors Jesus, and reminds the world of Him.

As Jesus himself said, “They will know that you are my disciples by the way you love” (John 13:36). No Christian can defend the unChristlike behavior of those who committed the violence on January 6. Not only was it anti-democratic, but it was also anti-Christian.

On January 6 we saw the flags claiming Trump’s name, calling for violence, and raising the name of Jesus. We saw images of a police officer being beaten with an American flag and another being crushed in a doorway. We know an officer was murdered in the act of insurrection. We witnessed the cross and the gallow being erected. We saw and heard the prayer the insurrectionists prayed from the Senate desk in Jesus’ name. Many of us recognized the content, the structure, and the style of that prayer as matching our own churches and faith.

But we reject this prayer being used to justify the violent act and attempted overthrow of the Government.

The letter also says that white evangelicalism has been particularly susceptible to the alleged heresy, in part because faith leaders have accommodated white supremacy. The signers note that the Klu Klux Klan claimed the sign of the cross even as it terrorized Black people; the letter also says that, “an appeal to ‘biblical values’ has been used to demonize immigrants,” before continuing:

There is a powerful Christian witness for the common good in our past and in our present. White evangelicals in America can grow in faithfulness by following this cloud of witnesses, including the many white freedom-fighters who risked their lives standing up for love in the face of violence and hatred.

We urge all pastors, ministers, and priests to boldly make it clear that a commitment to Jesus Christ is incompatible with calls to violence, support of white Christian nationalism, conspiracy theories, and all religious and racial prejudice.

We urge faith leaders to engage pastorally with those who support or sympathize with these groups, and make it clear that our churches are not neutral about these matters: we are on the side of democracy, equality for all people, anti-racism, and the common good of all people.

Instead of seeing the United States as God’s chosen nation we thank God for the church around the world that calls people of all races, tongues and nations to the knowledge and love of God. Instead of seeing any particular political leader or party as divinely appointed, we believe in the prophetic and pastoral ministry of the church to all political leaders and parties. Instead of power through violence, we believe in and seek to imitate the powerful, servant love practiced by our Lord and Savior Jesus Christ.

Our faith will not allow us to remain silent at such a time as this. We are also aware that our world needs more than a statement right now… we need action.

When discussing the letter with NPR, organizer Doug Pagitt — who leads the evangelical group Vote Common Good — said the prayers the Capitol attackers said in the Senate after overrunning the chamber were delivered in a way that would have been familiar to evangelicals or charismatic Christians. NPR reports:

“People from our very communities called people to this action in the days before, unleashed them into the Capitol, and then chose to baptize that action in the name of Christ,” Pagitt said. “And this is our time where we need to stand up.”

During last week’s Zoom call, Mae Elise Cannon of the ecumenical group Churches for Middle East Peace, called out unnamed evangelical leaders who she said have declined to sign, citing concerns including how it would go over with their churches or religious organizations.

“White evangelical brothers and sisters, where are you?” Cannon said. “There’s a few of us on this call today, but let me tell you how many people said ‘no.’ “