Pastor tells TV viewers Heaven will be work. Don’t worry, it will be fun, he said. 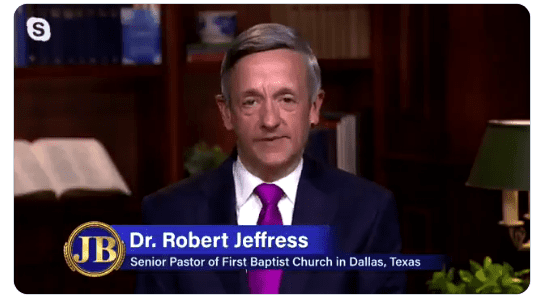 In the sweet by-and-by, you’re going to clock in and never want to clock out of your celestial job.

First Baptist Church Dallas Pastor Robert Jeffress, who became well known for his public support of former President Donald Trump, recently told televangelist Jim Bakker that — while people will worship God in Heaven in a way that they can’t on earth, they’re also going to spend a lot of time working.

“That might even sound more like Hell to some people, you know, working in Heaven,” Jeffress continued. “But remember, God created us to be workers. Work was a gift from God before the fall of Adam and Eve. … But in Heaven, the new Heaven and the new earth, all of the things that drained the joy out of our work, bodies that grow tired, strained relationships, government regulations — all those things will be removed and we’re going to enjoy work like God intended us to enjoy it.”

Pastor Robert Jeffress gives scamvangelist Jim Bakker a bat***t crazy answer about how Heaven is not going to be boring… pic.twitter.com/ONLIj93dqu

Jeffress’s comments appear to echo a sermon he gave earlier this year, which included these explanatory paragraphs before he launched into an invitation:

In revelation 14, verse 13, John was commanded to write these words, look at them. “And I, John, heard a voice from heaven saying, ‘Write this down. “blessed are the dead who die in the Lord from now on, that they may rest from their labors, for their deeds follow with them”‘”. What does he mean, “Blessed are those who die that they may rest”? I mean, to me that sounds so boring, resting. I hated it as a kid when my parents would make me take a nap. I just hated that. Is that what heaven is? Is that what he’s talking about? Resting from our labors, do we just go to sleep some eternal nap? No, the key is understanding that word, labors.

The word, labors, kopos, refers to the persecution of living in this world. The people John is talking about are those who were martyred during the tribulation for their faith. He said blessed are those who die for their faith. Happy are those, because in heaven they will be free. They will rest from the persecution they’ve experienced in this world. But I think the kind of rest you and I are going to experience goes beyond the cessation of persecution. The rest we’re going to experience in heaven is that occasional respite we even experience here on earth when we’ve finished a big job. (Editor’s note: Bold emphasis in original.)

Have you ever had a big project to finish, and once you’re finished, you say, “Whew, it’s over”? It’s over, I finished, but what I’ve done is not just good, it’s very good. To be satisfied with what God has allowed you to accomplish, I think that’s what it’s gonna be like in heaven. There’ll be those times that we rest from our labors, those times that we’re able to have true satisfaction in a job well done.