Priest suspended for participation at Jan. 6 ‘Stop the Steal’ event 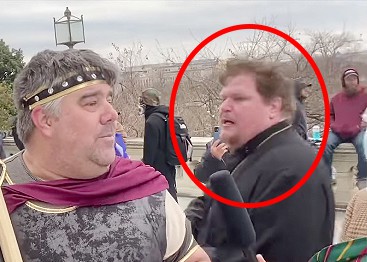 A priest associated with the Orthodox Church in America has been suspended from his ministry and faces permanent loss of faculties after his participation in the deadly Capitol Hill events of Jan. 6.

The Rev. Mark Hodges is not assigned to a regular parish, but works as a supply priest. His suspension, which was handed down by Diocese of the Midwest Archbishop Paul Gassios, came after observers identified Hodges as the man wearing a cassock in some videos from the events leading up to the deadly assault on the Capitol.

Hodges has not denied his involvement in the initial Stop the Steal gathering in Washington, D.C., that precipitated the Capitol  attack. The Hill reports:

Hodges told The Lima News on Wednesday that the suspension could be extended after three months or he could be removed from the priesthood. He said the punishment was handed down by Archbishop Paul Gassios, who accused Hodges of being “guilty by association.”

“And I disagree, you know, I think it’s an unjust suspension,” Hodges said.

The suspended priest maintained that he was not part of the group that entered the Capitol, saying instead that the gathering he attended was “Joyful, positive and orderly.”

“When I finally realized these guys were intending to violently antagonize the police, I went up to the police (in riot gear), shushed one of the yellers and thanked the police for protecting the people of Washington D.C. and for showing restraint and I apologized for the handful of screaming young men not showing restraint or self-control. Then I began to leave,” Hodges stated.

Whatever happens on that historic day, it will be an event to remember. You can tell your grandchildren that you were on the front lines in the Second American Revolution, where you fought to save the Republic.

After the events, Hodges told some outlets that the Stop the Steal event was misrepresented and that former President Donald Trump did not incite the crowd to violence.

Vershal Hogan is a newspaper editor and poet living in Southern Arkansas. He is a 2011 graduate of Louisiana College, where he studied journalism and religion. He has done graduate research centered on liturgy as call to action and the patristic understanding of the impoverished as the crown jewels of the Church.