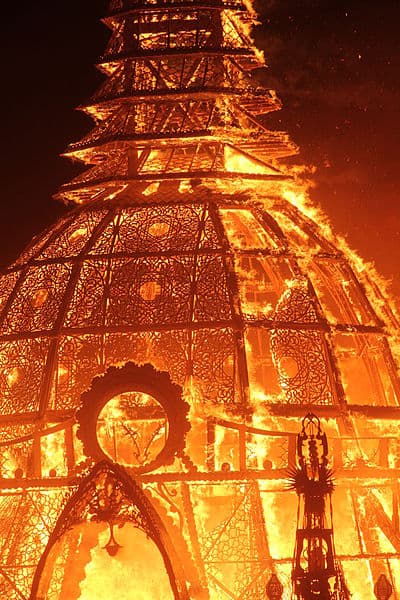 Lots of people who go to Burning Man have an experience through which they feel like they’ve seen God — some with psychoactive aid, but others through deep, interpersonal connection.

A temporary community that focuses on communal art, offering of gifts, and shared experiences that gathers in the desert every summer — skipping a couple of years during the height of the COVID pandemic — Burning Man often generates some form of spiritual experience for its attendees. That experience isn’t typically in line with organized religion.

But Episcopal priest the Rev. Alex Leach told Episcopal News Service in a Sept. 9 report that attending the event was, “part of me becoming a priest.” Leach first attended Burning Man in 2011, and said that the festival, “is just saturated in God.”

That’s part of why Leach and three others decided to launch a Christian camp, called ReligiousAF, at the 2018 Burning Man. ENS continues:

And last week, when Burning Man returned to an in-person festival after a two-year pandemic hiatus, Leach’s camp again was among the more than 1,000 themed camps spread across the desert plane, known to Burners as the Playa.

The Christian camp […] features a small chapel housed in a geodesic dome and an adjoining tent that serves as a kind of church living room. The camp’s 18 members represent a range of Christian denominations and offer morning prayer services, afternoon clergy hours and a daily Eucharist at noon in front of Burning Man’s central Temple structure.

Critical to the camp’s mission is providing Burners with opportunities for spiritual enrichment through a nonjudgmental form of Christianity, with no attempts at proselytization, camp member Michelle Booth, a lay Episcopalian from Virginia, told ENS.

“People would come in and say, ‘what are you guys all about?’” Booth’s response was simple: “We are here to give love and receive love. That is the essence of what we’re all about.”

ReligiousAF is not the first Christian offering at Burning Man. The Rev. Brian Baker — who had his own spiritual experience at the 2015 festival — led an Episcopal service at the gathering the following year. ENS continues:

At Burning Man in 2016, Baker led Eucharist next to the Temple – which, featuring a signature multistory wooden figure, is burned to the ground at the end of each year’s festivities. After the Eucharist, several people asked Baker if additional services were planned. Baker was astonished by the positive reaction.

“Never on Sunday morning has someone come up to me and asked if they could come back tomorrow because the experience was so moving,” he said.

That service served as a launch point for ReligiousAF’s founding.

Baker and other Burners from Trinity Cathedral began talking about creating an official themed camp. At that time, Leach was completing his field education for the priesthood at the cathedral. He now serves as priest-in-charge at St. Luke’s Episcopal Church in Woodland. Charis Hill, a cathedral parishioner at the time, also signed on to the project, as did Annie Dunlop, a Roman Catholic layperson who had heard Baker talk about Christians at Burning Man on a podcast.

Those four launched their Burning Man camp in 2018 with a few additional camp members. They chose an official camp name that would be “true, but not scary,” Baker explained. “Because we knew there would be a lot of skepticism at Burning Man of a Christian camp being there.”