Turn off the applause sign: finding authentic reflection while watching the horrors of war. 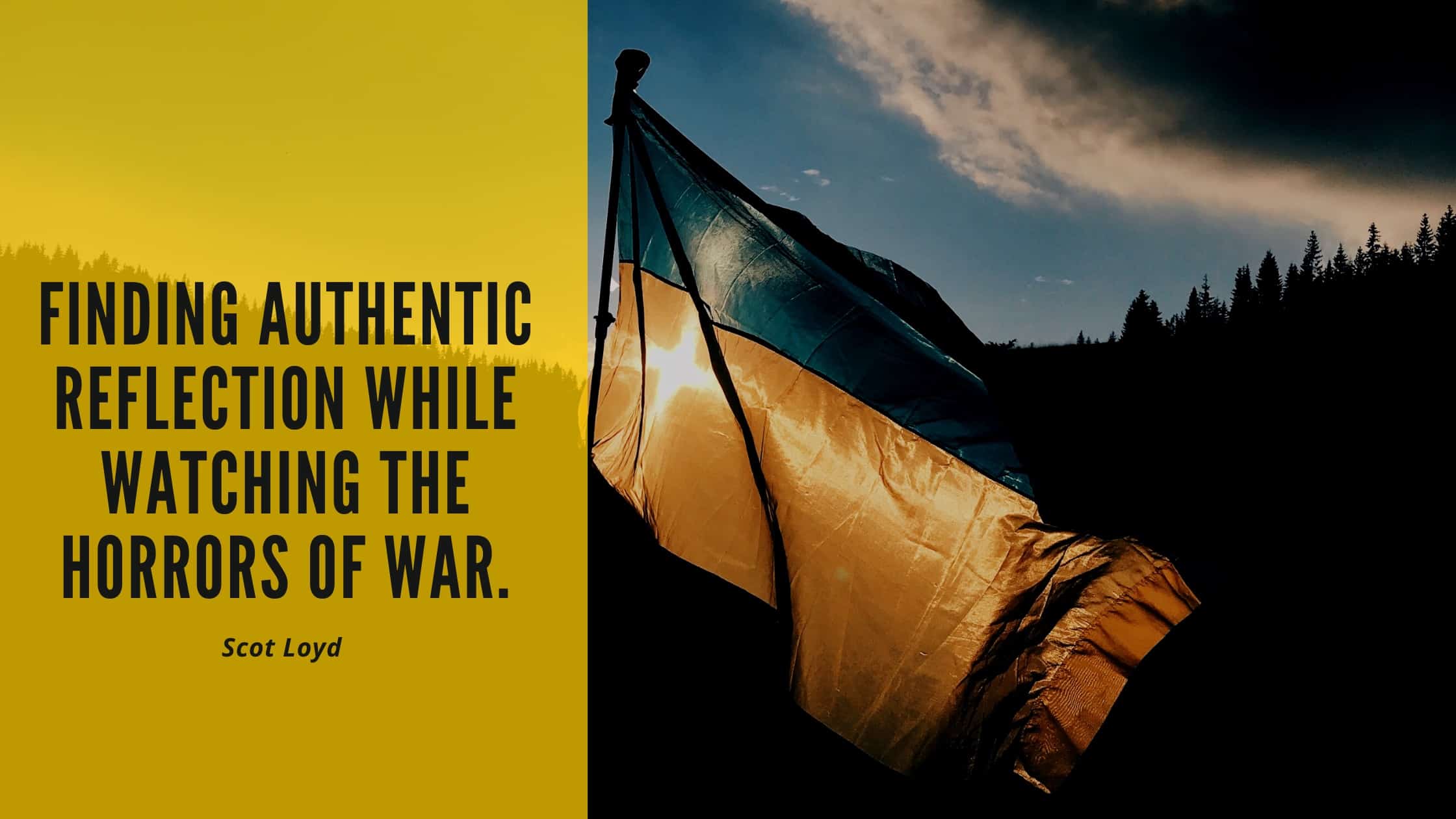 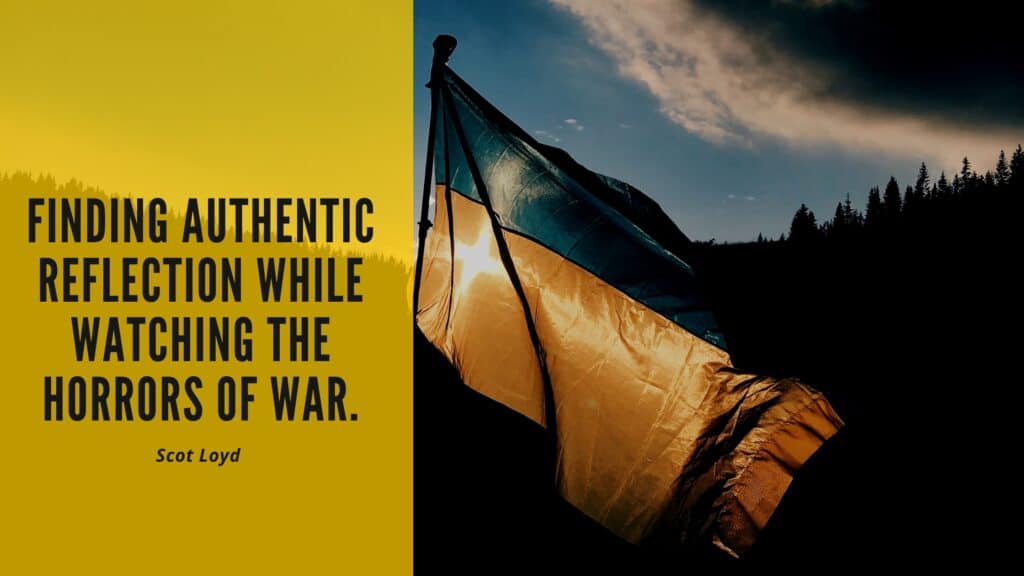 An innovation of American television was the introduction of the applause sign to live studio audiences watching the taping of situation comedies. The applause sign would signal the audience as to when it was appropriate to applaud, often when the star or guest star of the show walked onto the stage. Over time, as consumers of television we have become conditioned to live vicariously through the applause of an invisible audience as we watch these taped and edited performances. Although we may not applaud in the privacy of our homes, something registers in the emotional centers of our brains, triggered by the audience’s applause as the star of the show walks through the door. We may not laugh with the same abandon as the live audience, or the canned laugh track, but we do smile as we acknowledge that a joke has been executed. Television has been an effective teacher in instructing us that life as viewed through its lens is less about the reality of our experiences and more about our perception of what television believes our experience should be. Perception, in the media age, always subjugates reality. Even when it comes to the greatest horrors of human experience like war.

As Russia launched its invasion of the Ukraine, I tuned into the various news outlets and was reminded, once again, that television news is more about entertainment than it is about dissemination of any actual news. The ubiquitous “Breaking News” graphics that are accompanied by dramatic music serve to arrest our collective attention but rarely deliver either news nor breaking content; yet we continue to submit obediently to our benevolent media overlords like Pavlovian dogs. As the first evening of the conflict progressed, reporters for these networks (strategically positioned on hotel balconies and the Ukrainian countryside) dutifully put on their ill-fitting helmets and flak jackets as the news became less about information and more about images.

Next came the memes flooding social media sites as all of us signaled the virtues of our collective concerns by populating our profile pictures with Ukrainian flags and announcing that we were “praying for Ukraine.” I too participated, because after all, when bombs are falling on people half a world a way, the least we can do is express our solidarity with them via social media posts. Right? Living in the media age changes not only how we live our lives, but how we participate in the lives of others and interact with the world around us. While I have no doubt that all of us are filled with a certain amount of genuine concern for the people of the Ukraine, the virtual lives we project to the rest of the world often become more about the perception of our concern than it does about the actual concern itself. Perhaps Neil Postman was correct when he observed in his classic work Amusing Ourselves to Death, “at the end, one could only applaud those performances, which is what a good television program always aims to achieve; that is to say, applause, not reflection”

The proliferation of these memes were intended as a commiseration with the Ukrainian people, but in reality the ease with which we share these feelings in creative ways via the internet results in a reduction of the very messages they are intended to communicate. In the end, it becomes more about our appearances than it does about any actual suffering among the Ukranians. Stranger still is when these memes take on political, cultural, and even religious overtones. For instance, within minutes of the initial Russian incursions into Ukraine, Donald Trump called into the Laura Ingraham show on Fox News and lamented that none of this would be happening had he not been “robbed” of the 2020 Presidential election. Moments later, memes depicting Donald Trump’s silhouette reminiscent of the iconic “Bat signal” appeared with the caption “The whole world right now…” One could almost hear supporters singing “Donald Trump to the rescue!” Not to be outdone, many people see what is happening in the Ukraine as an opportunity to defend gun rights they perceive to be in danger, by posting memes about the importance of having and wielding AR-15s should Russia attempt to invade our shores. No doubt, visions of grandeur found a welcomed refuge in the minds of many of these internet warriors upon hearing the story of the Snake Island 13, as they imagined themselves telling would be Russian invaders or other imagined enemies of personal liberties to “go F**K yourself.”

Still others see these events as but another sign of the imminent return of Jesus or somehow an indication that this is specifically a war designed to persecute Christians. While I don’t deny that many of the stories that we hear of Ukrainian Christians huddled together singing hymns or of brave individuals resisting the might of the Russian invaders is inspiring and does serve to conjure apocalyptic visions, to conflate these events with anything happening to Christians in the United States is ludicrous. To do so illustrates that our concern isn’t with the Ukrainian people but instead with ourselves. We are living vicariously through mediated images because in the end we are more interested in applause than in honest reflection. Or as the French philosopher Guy Debord once observed, mediated images ultimately result in society being organized around “the production and consumption of images, commodities and staged events.” So that even a human event as horrific as war becomes less about its atrocities and more about how it reflects on our own perceived tribal allegiances. We crave applause and avoid reflection as the latter may reveal that there are very few differences between those we label imperialist aggressors and ourselves.

International borders are being redrawn, as are political, cultural, and religious boundaries in a post pandemic world. Perhaps all of us would be better served during this critical time in human history to reflect on the realignment of our own hearts and minds and instead of posting about praying—we actually do so. Maybe trusting that a Sovereign God is in control means turning the T.V. off along with the applause sign.