A bank full of beggars 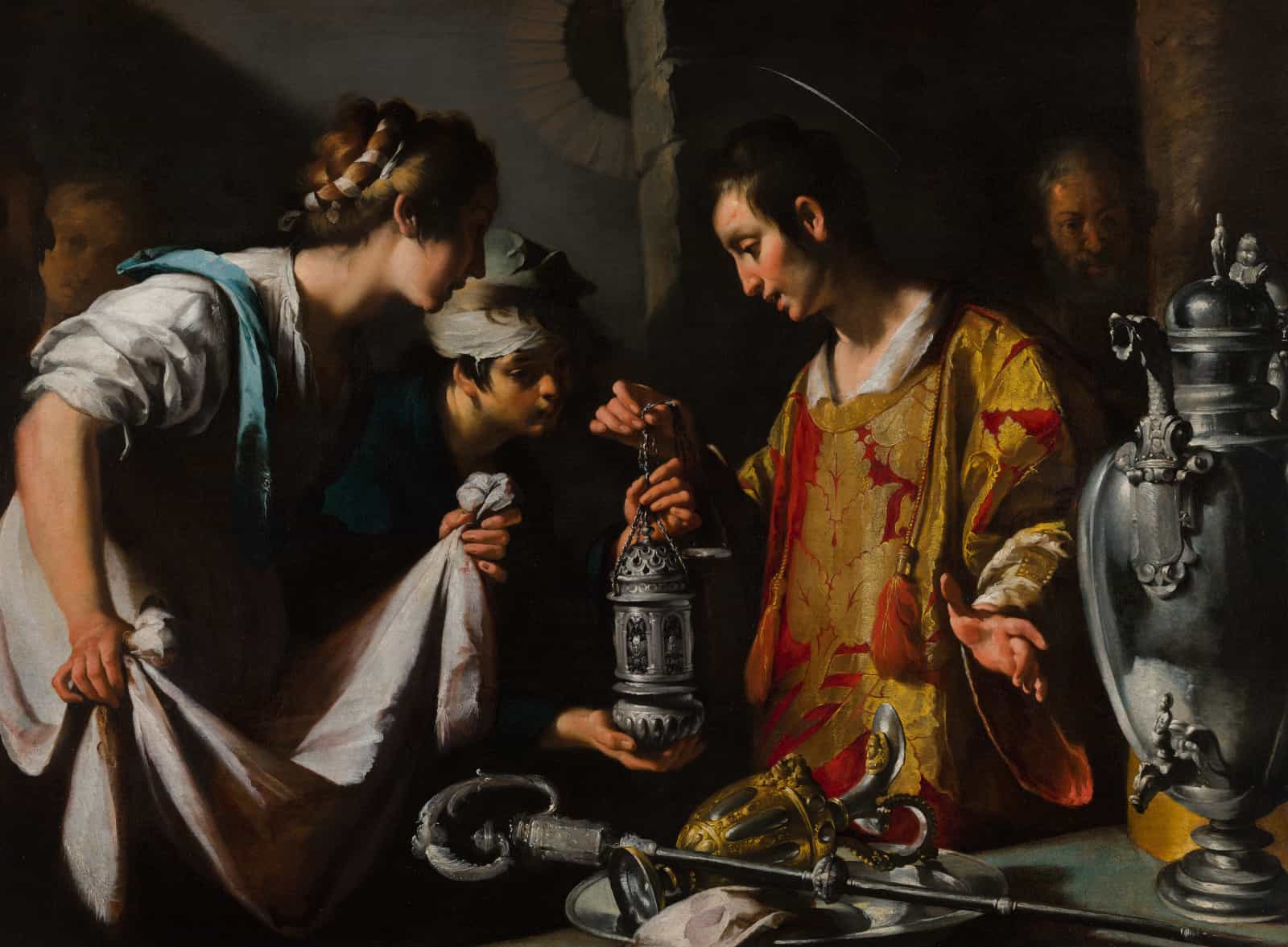 The Parcast Network’s Conspiracy Theories podcast recently did a four-episode deep dive into the supposed mysteries of the Vatican. While some parts were interesting and some were just silly, it opened with what I thought was an odd anectdote – the death of the third century CE archdeacon, Lawrence.

The anecdote began correctly. Under the persecution of Valerian, the Roman state was given authority to seize the church’s assets. When Lawrence was arrested as the steward of those assets, he was subject to significant torture and ultimately death by being grilled alive.

He never turned over the church’s treasures, the podcast noted, but then the host asked – over ominous music – what exactly were the treasures and why was he was willing to take their secrets to the grave?

It’s a curious choice for an opener, because Lawrence’s story is fairly celebrated. The podcasters failed to mention that Pope Sixtus II – not only the pope but also Lawrence’s immediate bishop – was set to be beheaded, and he instructed Lawrence to protect the church’s riches. After the pope’s death, the archdeacon knew he was soon to be arrested himself, and sold the church’s liturgical instruments, giving the proceeds and other church property to widows, orphans and other poor.

When he was summoned to the emperor, he was accompanied by the city’s beggars. Asked where the treasure was, he pointed to the crowd, telling Valerian, “These are the true treasures of the Church.” One hagiography’s telling of the event has him adding, “The Church is truly rich, far richer than the Emperor.”

It may seem easy in contemporary times to read that story and think that it was just one martyr giving a little cheek since he knew he was going to die anyway , but it was truly a radical statement for his day. Historian Tom Holland – no relation to the actor – has written extensively about the Roman world, and writes that Roman society ultimately functioned like “an apex predator.”

“The years I spent writing these studies of the classical world – living intimately in the company of Leonidas and of Julius Caesar, of the hoplites who had died at Thermopylae and of the legionaries who had triumphed at Alesia – only confirmed me in my fascination: for Sparta and Rome, even when subjected to the minutest historical inquiry, did not cease to seem possessed of the qualities of an apex predator. They continued to stalk my imaginings as they had always done – like a tyrannosaur.

Yet giant carnivores, however wondrous, are by their nature terrifying. The longer I spent immersed in the study of classical antiquity, the more alien and unsettling I came to find it. The values of Leonidas, whose people had practised a peculiarly murderous form of eugenics, and trained their young to kill uppity Untermenschen by night, were nothing that I recognised as my own; nor were those of Caesar, who was reported to have killed a million Gauls and enslaved a million more. It was not just the extremes of callousness that I came to find shocking, but the lack of a sense that the poor or the weak might have any intrinsic value.”

One may be tempted, then, to dismiss Lawrence’s last stand against Valerian as theological theatrics, but he was not alone in prizing the poor. His actions were actually somewhat of a reflection of institutional values of the day. The third century Didascalia Apostolorum, an ecclesiastical manual that discusses the orders of the church and how potential candidates for those orders should be chosen, canonizes the idea that the poor are among the church’s greatest assets. Not only does it require that any candidate for a biscopric “be a lover of the poor and stranger,” but it requires that the bishop – the apparent heir to the apostles in the local church – ensure that the poor and stranger have a place in the church, even if that means he has none.

But if a poor man or woman should come (whether of the same district) or of another congregation, and especially if they are stricken in years, and there be no place for such, do thou, O bishop, with all thy heart provide a place for them, even if thou have to sit upon the ground; that thou be not as one who respects the persons of men, but that thy ministry may be acceptable with God.

A keen-eyed reader will recognize that this particular command is a positive restatement of the more rhetorical teaching from the first century Epistle of James.

My brothers and sisters, do not show favoritism as you hold on to the faith in our glorious Lord Jesus Christ. For if someone comes into your meeting wearing a gold ring and dressed in fine clothes, and a poor person dressed in filthy clothes also comes in, if you look with favor on the one wearing the fine clothes and say, “Sit here in a good place,” and yet you say to the poor person, “Stand over there,” or “Sit here on the floor by my footstool,” haven’t you made distinctions among yourselves and become judges with evil thoughts?

Listen, my dear brothers and sisters: Didn’t God choose the poor in this world to be rich in faith and heirs of the kingdom that he has promised to those who love him? Yet you have dishonored the poor.

In a number of ways, the Epistle of James appears to be a midrash on the Sermon on the Mount, and sitting as we are divorced by millennia from the days when a peasant rabbi was teaching on a hillside, it is easy to spiritualize Jesus’s statement that the Kingdom of Heaven belongs to the poor. In its context, however, it’s difficult to escape hard conclusions, because he goes on to make specific material promises, “Blessed are you who are hungry now, for you will be filled. Blessed are you who weep now, for you will laugh.” Perhaps more discomfiting is that he continues on to declare that the eschaton will be woeful for those who are rich, “for you have received your comfort.” The same applies, he says, to those who are full, who will be hungry. In other words, theirs is the Kingdom of Right Now, and the good news that Jesus said he’d come to proclaim to the poor is in fact bad news to some.

But why should the rich be worried? Because, as Matthew’s Gospel records, Jesus explicitly identifies the King of Heaven with the poor.

And the King will answer them, ‘Truly I tell you, whatever you did for one of the least of these brothers and sisters of mine, you did for me.’

He goes on to frame the same propositions in the negative, saying that whatever you did not do – in this case, not feeding the poor, not giving the thirsty a drink, not visiting the prisoner – you neglected to do for the King. If the Roman and Hellenized world was as indifferent to the poor as Holland suggests, then following this command from the Kingdom of Heaven was not only an act of spiritual warfare, but class warfare as well.

Again, it is easy to try to frame the discussion in terms of inner lives and piety, but the author of James’ Epistle – who identified themselves as Jesus brother – smashes such quietisms with direct and unmasked class consciousness and contempt for the accumulation of wealth.

Come now, you rich people, weep and wail over the miseries that are coming on you. Your wealth has rotted and your clothes are moth-eaten. Your gold and silver are corroded, and their corrosion will be a witness against you and will eat your flesh like fire. You have stored up treasure in the last days. Look! The pay that you withheld from the workers who mowed your fields cries out, and the outcry of the harvesters has reached the ears of the Lord of Armies. You have lived luxuriously on the earth and have indulged yourselves. You have fattened your hearts in a day of slaughter.

So here at last we understand the woe of the wealthy and full. They stand comfortable among need, and worse, they are the ones who created that need. Workers have been cheated and starved, and the treasures the rich have locked away in their banks and houses have no currency in the eschaton. As David Bentley Hart wrote after translating the New Testament:

Now, we can read this, if we wish, as a dire warning issued only to those wealthy persons who have acted unjustly toward their employees, and who live too self-indulgently. But if we do so, we are in fact inverting the text. Earlier in the epistle, James has already asserted that, while the “poor brother” should exult in how God has lifted him up, the “rich man” (who, it seems, scarcely merits the name of “brother”) should rejoice in being “made low” or “impoverished,” as otherwise he will wither and vanish away like a wildflower scorched by the sun (1:9–11). He has also gone on to remind his readers that “God has chosen the poor to be rich in faith and to inherit the Kingdom,” and that the rich, by contrast, must be recognized as oppressors and persecutors and blasphemers of Christ’s holy name (2:5–7). James even warns his readers against the presumptuousness of planning to gain profits from business ventures in the city (4:13–14). And this whole leitmotif merely reaches its crescendo in those later verses quoted above, which plainly condemn not only those whose wealth is gotten unjustly, but all who are rich as oppressors of workers and lovers of luxury.

Such thoughts would have troubled people in the first and third century, but they must by necessity be more troubling today, because while the Roman vassal system of government was not forgiving, the economy was largely agrarian (though it did have a complicated system of debt and repayment, just as farming does today). In the 21st century, one has to contend with living in a global post-capitalist economy that has been codified by American and Chinese empires – and capitalism, by necessity and design, requires lower classes to work for the upper classes. The existence of a lower – and lowest – class is systemic, and as the system has self-reinforced, the infrastructure that keeps it running likewise reinforces it.

That is why there is no such thing as “ethical consumption.”  Somewhere in the supply chain that has brought consumers a product, someone has been exploited. And that is why today, even more than in the first century, there is no ethical accumulation of wealth.

My purpose here, frankly, is not to litigate how rich is too rich or how poor is the correct amount of poor, or to demand that no one live beyond a certain amount of personal comfort. Instead, I would only ask for a moment of reflection from those who find themselves within the tent of community that aims to follow Jesus of Nazareth. That tent contains a kingdom, a kingdom that has a treasury yet to be fully filled.

And where your treasure lies, Jesus said, there will be your heart also.