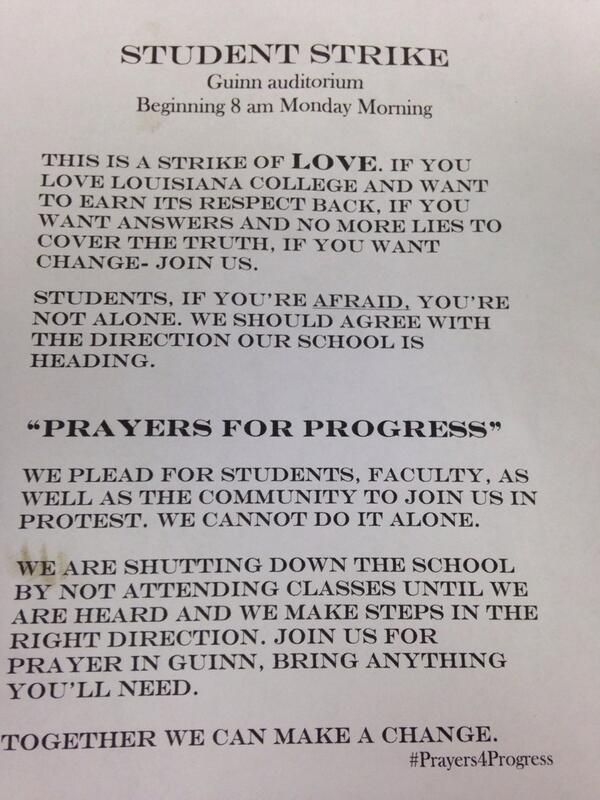 “There is no freedom of speech here. I didn’t make that up. That’s the law. When a student says, “I have freedom of speech…” We have three attorneys who will laugh them into the ground because there is no such thing here.” -Joe Aguillard

Social media has been buzzing. Wednesday night students put fliers around campus calling for a strike of LOVE. The flier says, “If you love Louisiana College and want to earn its respect back, if you want answers and no more lies to cover the truth, if you want change- join us.” Toward the end of the flier it states, “We are shutting down the school by not attending classes until we are heard and we make steps in the right direction.”

This is a major development. Students at LC have been scared for years. To reach the point where they are willing to stand is a huge step. And, it got Joe Aguillard’s attention. He held a question and answer session Thursday afternoon to deal with student concerns. The meeting lasted for almost three hours and apparently had a good deal of student involvement. Wildcat Media originally stated that they would post the video of the Q & A today. But, within an hour of posting the video they had been forced to remove the video by LC’s administration.

Until the video is released the only information available is through social media and personal accounts. The LC WildcatsMedia twitter feed provides some interesting insight:

Says his attorney came and spoke to SGA [Student Government Association] who said FOS [Freedom of Speech] does not exist on any private institution beyond what that institution allows it.

[Student] asks how much Aguillard makes. Says none of her business

Student asks if he will resign. He tells her he stands on Biblical truth and will continue to as long as Board of Trustees allows

Q&a didn’t put me at ease. If anything I’m more worried about our school now. Haha.

Q: What will be the repercussions for students who strike Monday? A: No meeting has been had yet, but if students just want to pray it’s ok

This is important considering reports from the few people who were able to see the video before it was pulled. They say that in the Q & A Aguillard said, “We have videos of people passing out flyers last night. Not saying that’s a threat but…” That sounds like a threat!

It sounds even more like a threat if one considers a statement released by the administration on the Faculty and Student Portal:

NOTICE TO STUDENTS The Administration of Louisiana College always encourages students to meet for the purposes of prayer. However, these meetings must be in accordance with the Student Handbook, Code of Student Conduct (Code) and all other governing policies of the College. The Administrative Council would like to remind students that any student who wishes to file a formal complaint can do so by following the process found on page 80 of the Code. Additionally, there are several provisions concerning the announcement of a strike with the intent of “shutting down the school,” as well as appropriate use of social media. Any such activities designed for this purpose are in violation of the College policies as established by the Board of Trustees. Possible violations of the Code include, but are not limited to: Page 69, Provision D Provision E Provision A-1 Provision B-3 Provision D-2 Provision D-4 Provision D-5 Provision F-1 Provision F-3 Most importantly, please be reminded that under some circumstances, severe sanctions such as suspension, denial of a degree, or expulsion from the College may be imposed upon the first violation of the Code. Link to Louisiana College Student Handbook: https://www.lacollege.edu/sites/default/files/2013-2014%20Handbook%20updated.pdf -Louisiana College Administrative Council

This is clearly a threat. Students who strike are risking “suspension, denial of a degree, or expulsion” if they strike! I won’t go into all the details, you can read the Student Handbook for yourself, but it seems to me that if the students are merely joining together to peacefully pray they only risk violating Provision 1-A, ” Failure to Comply with College Officials/Insubordination.” In other words, assuming good behavior by the students, this is only an issue if Aguillard chooses to exercise his authoritarian rights to squelch the strike.

While Aguillard’s words can be justified the tone of all these statements is threatening. Some of these students are in their last semester and are doing this not for their own gain but for the future of the institution. I hope that Aguillard’s threats are empty. But, he has in the past kept degrees from disgruntled students. In at least one case, the student had to take the college to court to get her degree.