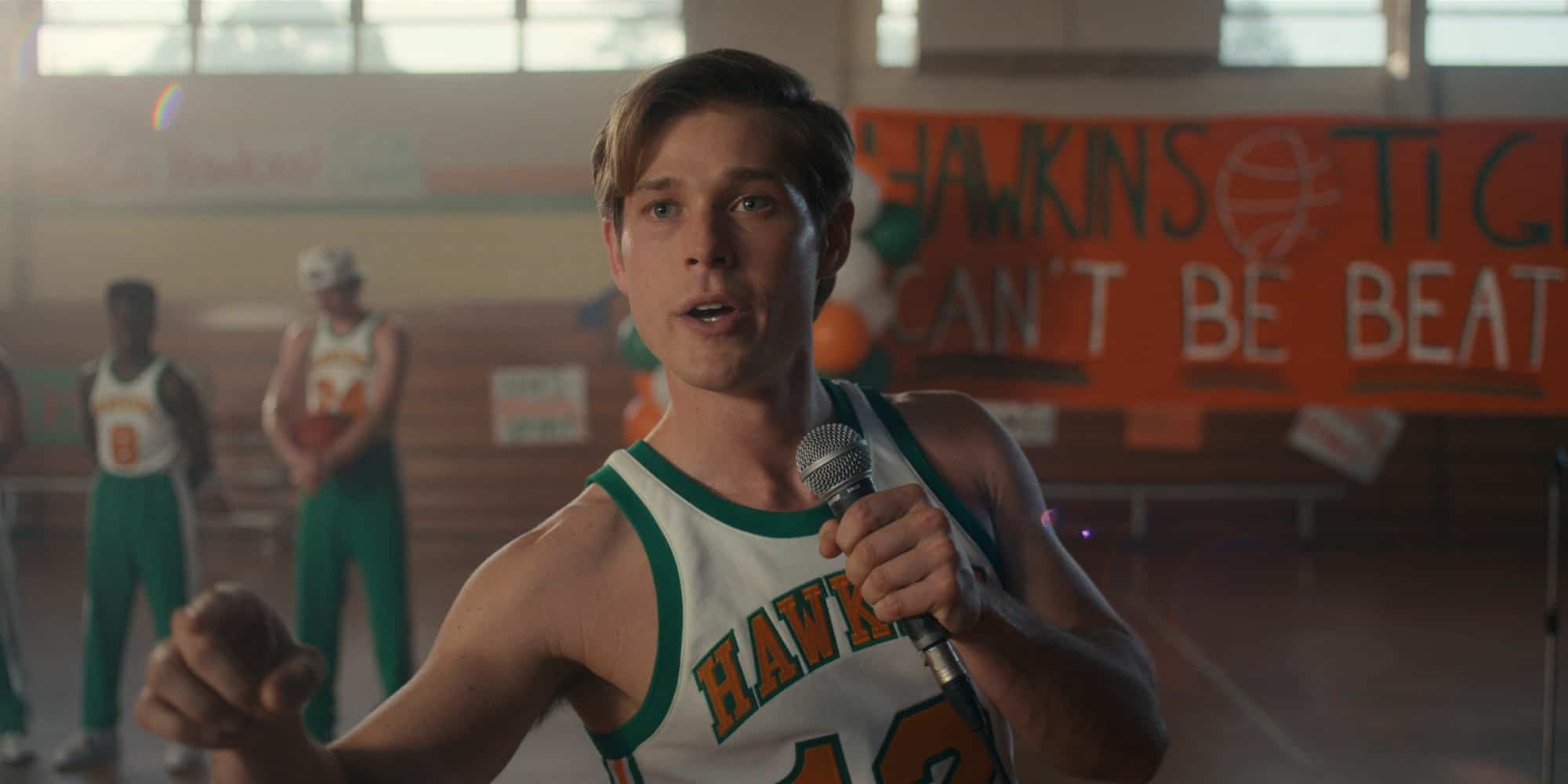 It takes a lot of unfortunate negative charisma to gain the title of most hated villain in a show that features human-eating demogorgons, vicious Soviet operatives, and the most terrifying dream killer since Freddy Kreuger. Enter Jason Carver, the perfect picture of small-town athletic wholesomeness fated to gain lasting fame where it really matters, the basketball court. In Stranger Things, Mason Dye plays Jason to smug perfection as the embodiment of fifties idyllic masculinity and the bane of eighties movie heroes. Jason dates Chrissy Cunningham, (Grace Van Dien) a cheerleader and one of the most popular girls in school. He lords it over social outcasts like Eddie Munson (Joseph Quinn) and other members of the Hellfire Club.

It’s important to note that Jason never calls himself a Christian or professes a deep sense of theological understanding beyond parroting the cultural tropes of the satanic panic. But would any of that really matter in the world of eighties and nineties youth group culture many of us grew up in? Guys like Jason represented the ideal youth group catch no matter how much students were regaled with stories of Samuel passing over the older towering brothers to anoint slim young David. Jesus loves “nerds,” but can you really build a thriving youth outreach without a few social studs? Applications of Isaiah’s discourse on the Suffering Servant were good enough for Jesus, but not necessarily for the Lord’s anointed in these “last days.” The Suffering Servant might have no beauty that we should regard him, but newer model saints should serve with style and maybe even a little sex appeal. Strictly wholesome fully covered True Love Waits sex appeal, of course. No matter what he’s done or who else is in the room, Jason Carver is the guy people want to see take the mic on testimony night. The moment at the Hawkins public meeting when he becomes the voice of white suburban Christian America’s war against Satan in Stranger Things season four rings all too true. The scenario seems utterly ridiculous. It is utterly ridiculous. And yet it has been repeated over and over again throughout American history. It’s safe to say that Jason represents the world of small-town white establishment cultural Christianity in the context of Stranger Things. That being the case, people who care about the future of American Christianity should pay close attention to his portrayal and his fate in the show.

Jason’s passion for the cause rests on his grief at losing Chrissy, the vicious Vecna’s (Jamie Campbell Bower) first victim. At least, Jason insists that his anger is about losing Chrissy. Viewers know from the beginning that there is trouble in paradise. Chrissy forges a tentative friendship with Eddie Munson because she approaches him to buy drugs. The golden girl, envy of the school, is struggling with deep emotional issues and doesn’t feel like she can turn to any of her friends or her boyfriend. They all might judge her and reject her. Eddie understands Chrissy in a way that none of her popular friends can, making it even more tragic when their growing friendship is cut short by her gruesome death and the accusations that Eddie is responsible. Jason pushes away attempts by the police and friends to set the record straight about Chrissy’s problems. He refuses to accept that Chrissy would ever purchase drugs or pursue a friendship with Eddie. She must have been a victim of satanic ritual abuse. Jason makes it clear that he does not have any interest in knowing the real Chrissy even in death. He wants the pristine illusion of her he has created. His crusade against Eddie and the Hellfire Club is rooted more in protecting his idol of Chrissy’s innocent persona than securing justice for her or protecting citizens of the town.

Jason grows from an annoying Bill Tannen knock-off at the beginning of season four to a truly evil and threatening presence by the end of the season. His crusade poisons his mind and heart until he himself becomes an unwitting servant of Vecna by attacking those who truly are trying to stop Vecna and save Hawkins. His threatening confrontation with Nancy Wheeler (Natalia Dyer) at the army supply store reveals how his contempt for the Hellfire Club causes him to dehumanize anyone associated with them. Jason no longer views Nancy as a person deserving of basic human respect because of her brother’s association with the group. The world for him has been shorn of complexity to rest in stark shades of light and dark based on whether someone is affiliated with the mythic satanic cult he’s constructed in his imagination.

Jason bears direct responsibility for Max Mayfield’s (Sadie Sink) dark fate at the end of the season. While Max is offering herself to Vecna as bait in the Upside Down, Jason attacks Lucas Sinclair (Caleb McLaughlin), preventing him from acting as Max’s failsafe in the real world. A visceral cry of rage issues from the Stranger Things fandom when Jason crushes the Walkman containing Kate Bush’s musical elixir of life, “Running Up That Hill.” There will be no last-minute musical escape this time because of Jason. It is a great moment when Lucas stands up to Jason. Even the most dedicated pacifist might have to confess a bit of satisfaction when Lucas delivers the punch to Jason’s jaw that we’ve all wanted to give him for nine episodes. Jason secures his villain credentials one last time by leaving Max vulnerable to Vecna and in a coma going into season five.

The ingenious way the Duffer Brothers dispense with Jason speaks volumes about how they and we as the audience view this character. Jason is engulfed in flames as cracks open in the fabric of reality. Jason enabled these cracks through Max’s temporary death. Jason’s immolation is so quick many people missed it on first viewing. His death is not epic. It’s not even significant. He’s an afterthought. News coverage at the end relates the death of Eddie Munson but does not even mention the demise of Hawkins’ former basketball star. Jason does not have the makings of an interesting villain. His villainy comes through as pathetic because it is driven by his fear and inflated self-righteousness rather than any tangible goals or needs. His death is handled with contempt because that is all we or the Duffers can muster to feel for him.

Stanger Things offers an important wakeup call for American Christianity, particularly conservative white Christians. However, in no way, shape, or form do I think Stranger Things set out to do this. Few things are more annoying than the inevitable cheap booklets that come out “finding the gospel” in every popular television show despite the creators’ insistence they never put it there. The Duffers set out to tell an entertaining story that captures nostalgia and connects it to the current cultural zeitgeist. That should concern conservative white Christians when it comes to Jason Carver. The contempt with which he has been greeted by fans of the show mirrors the growing disdain for the culture war Christianity he represents. People are done. After five decades of shrill political action groups, televangelist escapades, Satanic Panics, American Family Radio boycotts, and other adventures in ignoring the forest for the trees, or real human flourishing for political power, people do not even find culture war Christianity interesting anymore. The only people who do are culture war Christians themselves, slaves like Jason to their fears, illusions about the nature of reality, and inflated self-righteousness. They push away the very people they claim to want to help, and instead inflame, and sometimes also create, the very problems they insist they are trying to solve. American Christians stand at an important historical and cultural crossroads. The next few years will demonstrate whether conservative Christians’ gamble to sacrifice Christlike means to achieve their political ends will prove worth the compromise. Their power, though it seems great now, is tenuous at best and will likely leave the church a minority presence in a world that has come to view Christians as oppressors because of the misguided acts of one overrepresented subset of Christianity. Jason Carver serves as a cautionary tale of how people in the wider culture are viewing all these cynical machinations on the part of far too many Christians. It’s hard to argue you’re being salt and light when most folks would rather just watch you implode in a fiery fissure. A fitting end for a character who spent all his time seeing hellfire in everyone else. You tend to find what you look for.