Dawn of the Planet of the Apes: Guns don’t kill people, apes do. 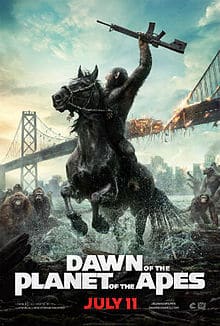 If like me you grew up in the 70’s and 80’s and you love sci-fi and fantasy, this is a great time to live. Star Wars, The Hobit, Lord of the Rings, Marvel, DC, Transformers…when I was a kid I could have even imagined the type of movies we are now seeing made. They are technological wonders. But at times, the technology rather than the story becomes the point. We saw that recently with the latest Transformers movie. But, Dawn of the Planet of the Apes makes the story primary and uses the impressive CGI to make the story even more compelling.

Dawn of the Planet of the Apes takes place 10 years after Rise of the Planet of the Apes. The virus which scientists created 10 years earlier, dubbed the Simian Flu, largely eradicated human society. Millions were killed and in the aftermath anarchy and chaos dominated. The apes had net sen humans in two winters and assumed they were all gone. But, they weren’t. A group survived in San Francisco.

The human survivors are working to restore power by fixing an electrical dam which is in Ape territory in Muir Woods north of San Francisco. When the humans travel north to work on the bridge they run into the apes and in fear shoot one. Caesar (Andy Serkis), the leader of the apes, warns off the humans but refuses to wage war. Despite warnings not to return Malcolm (Jason Clarke) returns to explain the situation to Caesar and ask permission to work on the dam. Caesar agrees but they have to turn over their guns. Unfortunately, Carver (Kirk Acevedo) sneaks a gun which later gets found. This crushes Caesar’s trust but Malcolm and Ellie (Keri Russell) work hard to regain Caesar’s trust including providing antibiotics for Caesar’s ailing wife Cornelia (Judy Greer). However, the ape Koba (Toby Kebbell) steals some guns from the humans and tries to assassinate Caesar while framing the humans. 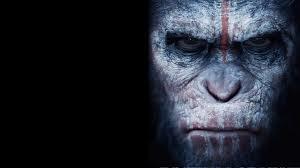 Koba’s thirst for war is successful and in the aftermath of Caesar’s assassination, he uses the apes anger at the humans to wage war and conquer San Francisco. However, Caesar was not killed and Malcolm and Ellie nurse him back to health. He soon returns to the ape community to challenge Koba. Caesar is successful in regaining control but the humans notified a military human community to the north. The movie ends with Caesar and Malcolm expressing their friendship for each other and lamenting that they were not able to achieve peace.

In so many ways this is a dark film. We all know that in the end, the apes win and that humanity fades. The challenge is how to make a compelling story when we all know the basics of the story. The writers did a masterful job of it. The viewer is able to identify both with the struggle of Caesar and Malcolm. The tense and later tender relationship between Caesar and his son Blue Eyes (Nick Thurston) was also very compelling. Initially, Blue Eyes’ distrust of the humans caused him to side with Koba but as he saw Koba grow more and more out of control he gained respect for his father and found his own courage. 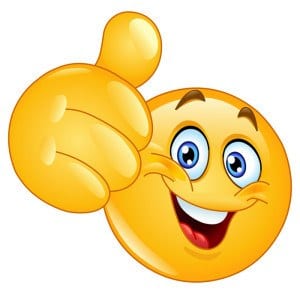 This movie receives a Thumbs Up- well sorta.

One of the most compelling aspects of this movie is that it did not avoid nuance. It is often too easy to have black and white understandings of good and bad in the movies. This movie could have very easily taken the position that apes are bad, or humans are bad, or that guns are bad. Ultimately though the movie recognized the depravity in all of us. Carver had an unreasonable hate of apes. He hated the apes for the Simian Flu even though it was humans that made the flu. Koba had reason to hate humans but it consumed him so that he was even willing to kill apes and his friends to gain control and destroy the humans. The apes hated the guns because of their power to kill but then felt free to use them to kill their enemies. The apes started the war but the humans were very willing to start it if they didn’t get what they wanted.  Caesar and Malcolm saw the good in each other and each tried to stand against their own people to protect and recognize that good but in the end, they could not forestall war. As Caesar wisely pointed out, the apes started the war but the humans would not be willing to forgive. It was the depravity in both that leads to war. It is as much the evil in them as the evil in us that is the problem.