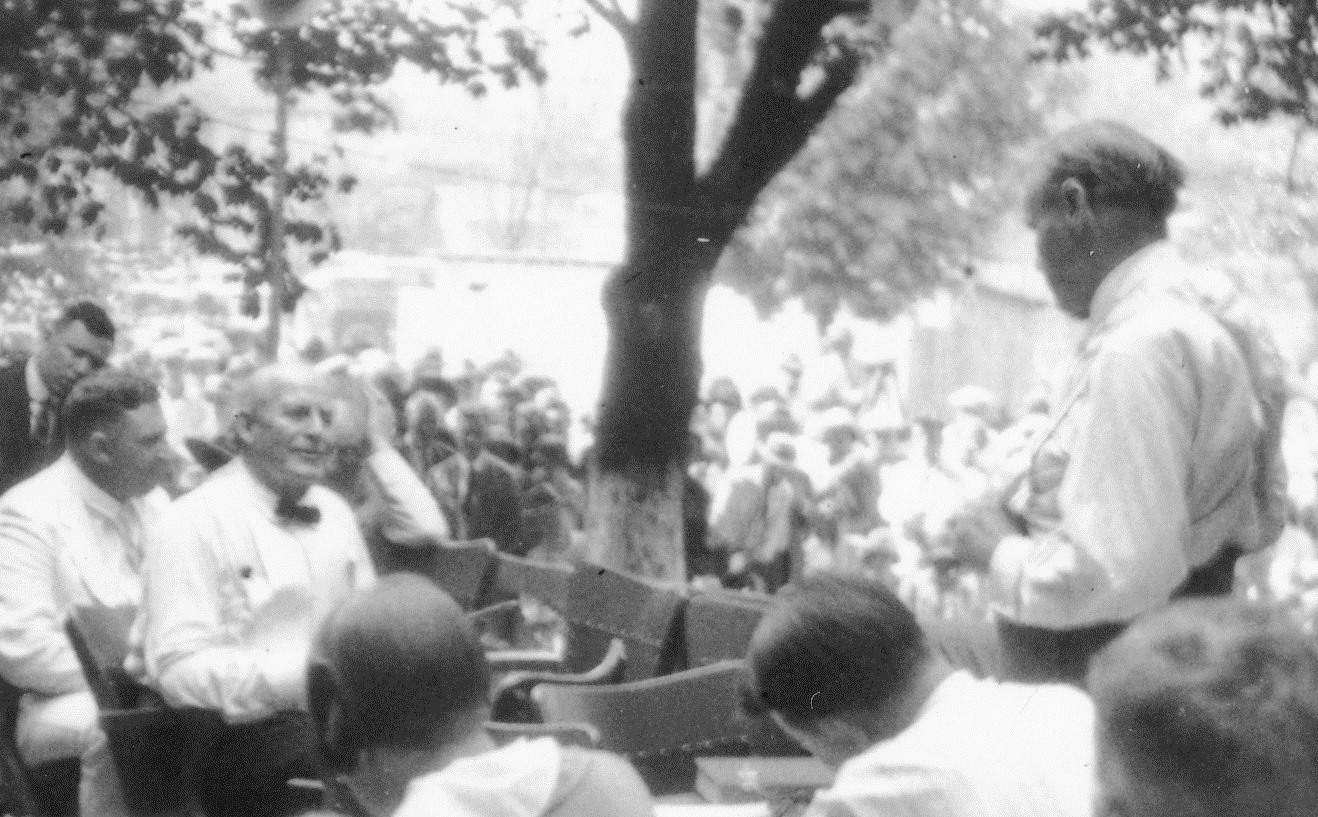 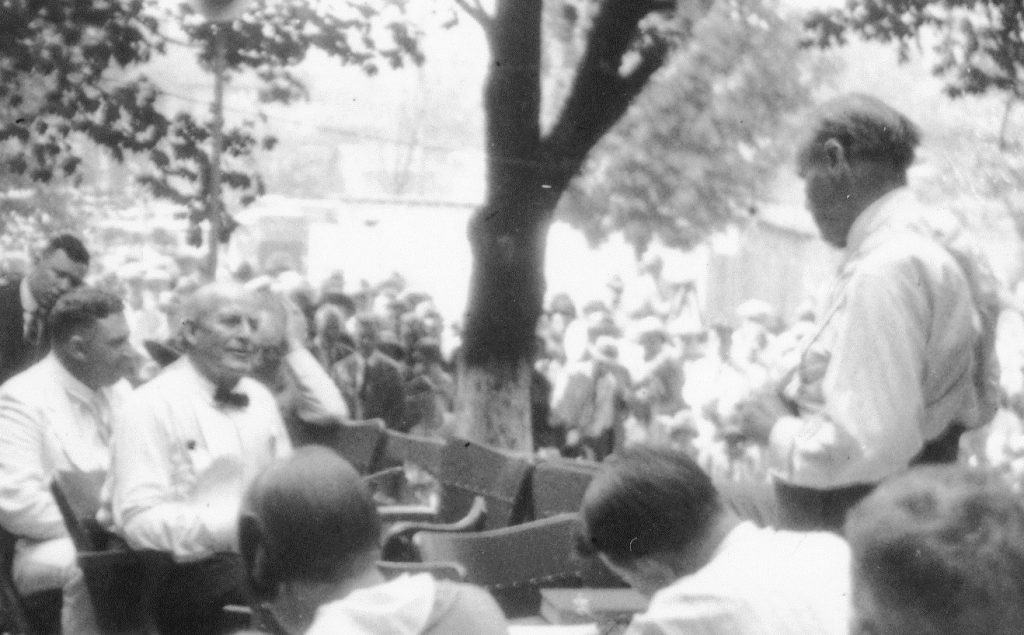 The two aging gladiators met on a makeshift wooden platform outside the Rhea County Courthouse in Dayton, TN. The most famous courtroom scene in American history did not even take place in a courtroom. The date was July 20, 1925, and the witness was William Jennings Bryan. Bryan enjoyed a reputation as one of the most famous men in America at the time. The former “Boy Orator of the Platte” had run as the Democratic nominee for president three times, electrified the nation with his famous “Cross of Gold” speech at the 1896 Democratic national convention, and served as Secretary of State in the Woodrow Wilson administration until his resignation in 1915. The defense attorney questioning Bryan was Clarence Darrow, one of the most capable legal minds of his generation, champion of the American Civil Liberties Union, and a lifelong skeptic in matters of religion. He also supported William Jennings Bryan when the former ran for president. John T. Scopes, the young Rhea County High School football coach and substitute teacher charged with violating the Tennessee law that banned the teaching of evolutionary theory known as the Butler Act of 1925, sat almost forgotten on the sidelines as the two legends collided in a bizarre cross-examination that defied legal conventions. Darrow called Bryan, a member of the prosecution team, to testify as an “expert” on the Bible since Judge John T. Raulston had barred him from calling any experts on evolutionary theory to testify. Bryan taught Sunday School for years and was a competent lay teacher of the Biblical text, but that day he demonstrated his lack of academic qualifications to engage with the text on a more technical level.

The Scopes Trial illustrates well the great American tradition of mixing our most profound social and metaphysical questions with the absurdities of popular cultural trappings. One wonders if these moments in American history and culture are really about seeking deeper answers or savoring the drama created by the conflict. Long before reality television, the Scopes Trial was contrived from beginning to end as an event that maximized the drama of the conflict over questions of human origins and scriptural interpretation while minimizing a real discussion of the actual issues underlying the controversy. The trial was born at Robinson’s Drug Store in Dayton when a group of civic leaders that included the owner, Earle Robinson, and businessman George Rappleyea decided to create a test case for the Butler Act in response to an ACLU newspaper ad calling for volunteers to initiate test cases. Scopes was called to the soda fountain by Robinson, who as head of the local school board was technically his boss, and urged to put himself forward as a defendant. A warrant was issued for his arrest, and the young coach returned to the tennis game he had been playing before he was summoned. These civic boosters got more than they bargained for when the pastor of the First Baptist Church in Minneapolis and founder of the World Christian Fundamentals Association, William Bell Riley, wired Bryan with a summons to defend the Butler Act. What started as a modest publicity stunt to stimulate the Dayton economy mushroomed almost overnight into a massive national cultural phenomenon as Bryan and Darrow leaped into the fray. Dayton found itself swamped by a flood of visitors that overwhelmed the capacity of local businesses to meet the surge of demand.

The circus came to town. In a curious mix of profundity and absurdity, gospel choirs sang on street corners while carnival barkers treated crowds to the antics of performing monkeys. Joe Mendi, the famous “Gentleman Chimpanzee,” delighted the children of Dayton as he waddled around the town square dressed in a suit with a bowler hat and an elegant cane. Crooners sang songs refusing to let evolutionists make monkeys out of them while Baltimore Sun journalist H. L. Mencken noted that, based on the conduct of the local citizenry, it was the ape that should be mortified about filial connections to the human race. Basic facts about the underlying controversy were submerged under the tide of popular rhetoric. Few appreciated the important distinctions between ancient hominids and modern monkeys. People were presented with the stark option of choosing between evolution and faith despite the fact that many prominent American evolutionists, including the Harvard botanist Asa Gray, had been devout Christians as well.

The carnival atmosphere and framing of the event as a contest between two rigidly defined points of view obscured important nuances of the controversy. Darrow put Bryan’s own old earth creationism on display when he challenged Bryan on the length of the “days” in the early Genesis account. Many of Bryan’s followers had attached new earth creationism and rejection of human evolution as a package deal without realizing that many of their heroes, including Bryan and William Bell Riley, accepted a “Day/Age” interpretation, which allowed the days in Genesis to be longer than a literal twenty-four hour period. The first generation of Fundamentalists were influenced by the discussion of the issue in the notes of C. I. Scofield’s study Bible published in 1909 by Oxford University Press. To explain an apparent lapse of time between the first two verses of Genesis, Scofield proposed a “gap theory” that was also popular among the early Fundamentalist leaders and little understood by many of their followers. Losing sight of crucial nuance caused some rank and file supporters to insist on rigid definitions of theological and cultural orthodoxy that even their own leaders did not meet.

The Scopes Trial remains fun to study in part because it raises this connection between our faith and our folly and puts it on vivid display. How often when we are trying to be profound in American culture do we instead find ourselves just being thoroughly absurd? Do we feel free to be silly because we are aware that, when all is said and done, some of our most profound questions can never be answered to our complete satisfaction in this life? From colonial mockery of Puritan excesses to Dana Carvey’s caustic Church Lady on “Saturday Night Live,” sometimes we choose to laugh at the contradictions that lie at the heart of our attempts at profundity rather than lament them because the alternative could be a debilitating nihilism that helps no one. The Enlightenment philosopher Voltaire once quipped that God is a comedian playing to an audience too afraid to laugh. He would appreciate how often the American response to profound mystery is raucous absurdity.

A great resource for further reading is Edward Larson’s excellent book Summer for the Gods: The Scopes Trial and America’s Continuing Debate Over Science and Religion (Basic Books, 2006).