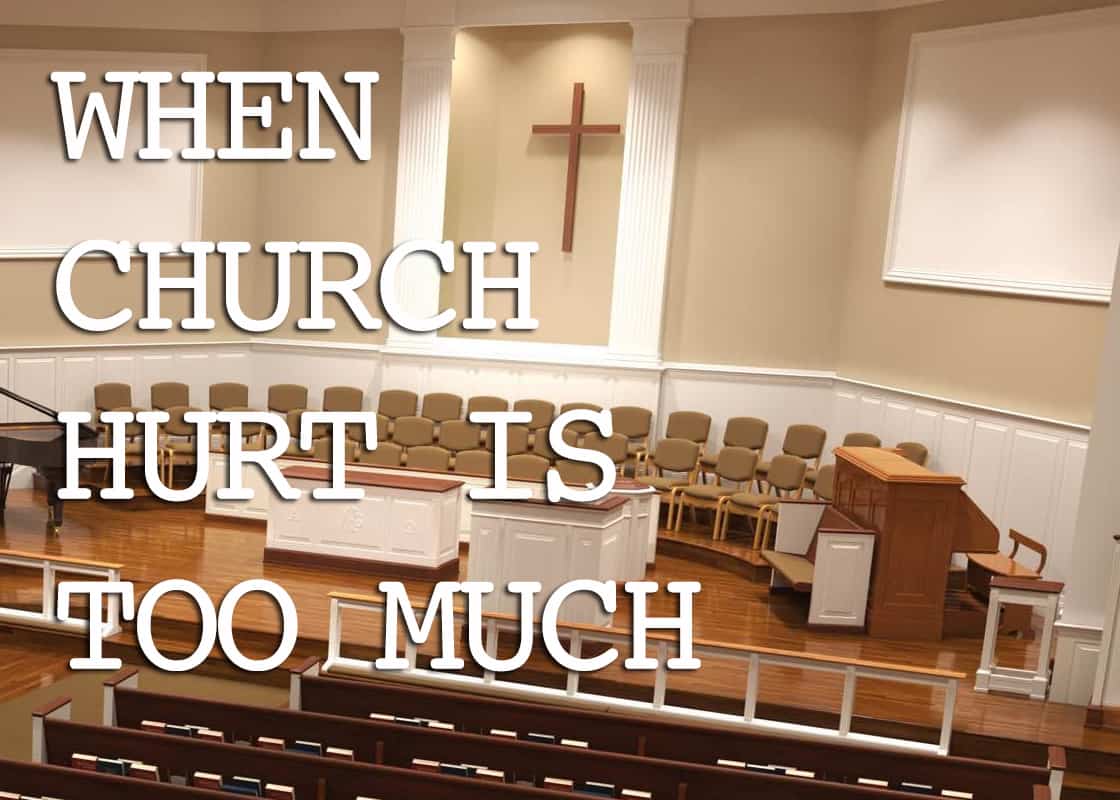 “If being hurt by church causes you to lose faith in God,” so the saying on a popular image macro goes, “then your faith was in people, not in God.”

I’ve been seeing this sentiment more and more in the last couple of years; I’ve seen the exact phrasing of the aforementioned macro many times in multiple formats. I’ve seen a number of people sharing it with amens and acclamations of affirmation.

The message is, in some ways, a less pithy version of the axiom often — and probably apocryphally — attributed to Augustine: “Never judge a philosophy by its abuse.”

The problem, however, is that the church (however one defines it) is not a philosophy in a vacuum, but an actual institution comprised of living, breathing individuals who make the claim that, as a corporate body and in some instances, individually, they are the hands, feet and voice of God.

In other words, while the macro may help someone who feels as if they have had no part in hurting someone away from the church soothe their doubts, it dismisses the reality that a person has been hurt by an institution that claims to be the Body of Christ. For many people, the enfleshed Christ of the second coming is a disembodied conception when faced with ongoing abuse at the hands of the present Body of Christ wedged between the pews, behind the lectern and standing at the altar week after week.

Likewise, and contra the imaginary Augustine dismissing the trauma of many, those who live outside a vacuum of philosophy can only judge a theology, belief or practice by the measure of its application, including its excesses. Moderation is always a good thing, but when a belief begins to cause harm, it may be time to consider if the harm is a poor application or a natural conclusion.

This is not to say that all hurts are equal. Of course, they aren’t; life is not a zero-sum game of happy or harmed. The Gospels lay out a course of action for resolving those disagreements and sins between members of the church.

But some things are bigger than simple disagreements, and some things do more harm. How can someone who has been abused into the ground by a figure who has repeatedly told them to not speak against the Lord’s anointed continue to believe in the goodness of a message that has been delivered by such a bad actor? Some people can, but others cannot.

The Gospels don’t speak much to how to address the kind of pain one can feel when it has been inflicted by an institution, because when they were written the Gospels had no conception of what the church (again, however you want to define it) would become. But Jesus did address it once, and it wasn’t to castigate the little ones who stumbled. Instead, he said a millstone around the neck and a sharp drop into the sea would be better for those who caused the stumble.

Then, of course, there’s this quote that is actually attributable to Augustine: “So many sheep without. So many wolves within.”

That may seem like a sharp turn, but I have a point to make. Part of the reason many people want to dismiss or at least diminish what has caused others to abandon part or all of their faith is because they are still part of that system, either writ large or, in some cases, with a specific institution. They would rather offer a pat answer than grapple with the difficult question of what remaining in communion with a specific system means to them, or if they were themselves complicit in the harming of others.

This also dovetails with a cultural moment we in the U.S. are having, discussions about banning books and what is appropriate for not only children but anyone to read and discuss. The books in question, notably Art Spiegelman’s “Maus”, deal with deep atrocities and, discomfitingly, do not end with a note of redemption. Instead, they contain not only first-person witness to real-world horror, but they also speak to how that witness can have multi-generational effects.

I do not want to fall off the metaphorical tightrope here into a pit of making Holocaust comparisons, but I do want to make a point that it is important in all instances of dealing with horrors and hurts — be they systemic governmental efforts or church-wide coverups of abuse — to have the victims centered and hear their voice. Just as some school boards would rather students not read first-person accounts of the horrors precisely because they are uncomfortable, so also do those who would dismiss someone’s losing faith over a serious hurt or abuse often phrase their framework in a way that admits that something bad happened but places it cleanly in the past.

This is where in Christianity one often sees what I will call Toxic Forgiveness Culture (TFC) come into play. TFC does not seek true understanding or reconciliation between aggrieved parties, if it can be achieved, but instead insists that the victim must quickly and with little hesitation forgive their abuser — which in this case means at minimum pretending that all is OK and nothing has ever happened, and at maximum be so completely reconciled to the abuser that their relationship appears better than ever. In many circles, the pressure to grant this so-called forgiveness is intense. A time of performative repentance may be required of the aggressor party, but they often face little in terms of long-term consequences. The key is to return to the status quo and away from the hurt as quickly as possible.

TFC is another form of harm, which in this instance is perpetuated upon both the victim and the abuser. When the party causing the hurt is not given the opportunity to restore themselves to wholeness (because sin undeniably mars), they harm their souls even further; and because TFC is often perpetuated in official and unofficial capacities by the communities and institutions that claim to serve God, it harms the victim by never ensuring they are again whole, and by leaving in place the system that harmed them. When the institution claiming God’s name acts in such ways, who can doubt that some would choose — or just outright lose the ability — to leave that God behind?

Rather than rely on glib dismissals or TFC, those who want to address the increasing issue of people walking away from church because of personal or corporate hurt should instead begin with steps in the other direction.

The first, as is true of most things in life, is to listen. Rather than assuming one knows, listen to what someone is saying when they leave. Quite often they are saying why they are leaving plainly and church people are not willing to hear it.

The second is to ask if, having heard their answer, you have yourself been complicit in what pushed them away. It is an uncomfortable exercise, but the slow strain against that discomfort can help build new muscles, and — I hope — help churches and people associated with them develop new insights and healthier methods of ministry.

The third is even more uncomfortable: call for and demand repentance. TFC will likely serve to hobble such calls, but stand firm. John the Baptist didn’t wear linen, and unfortunately, repentance at a corporate level is uncomfortable.