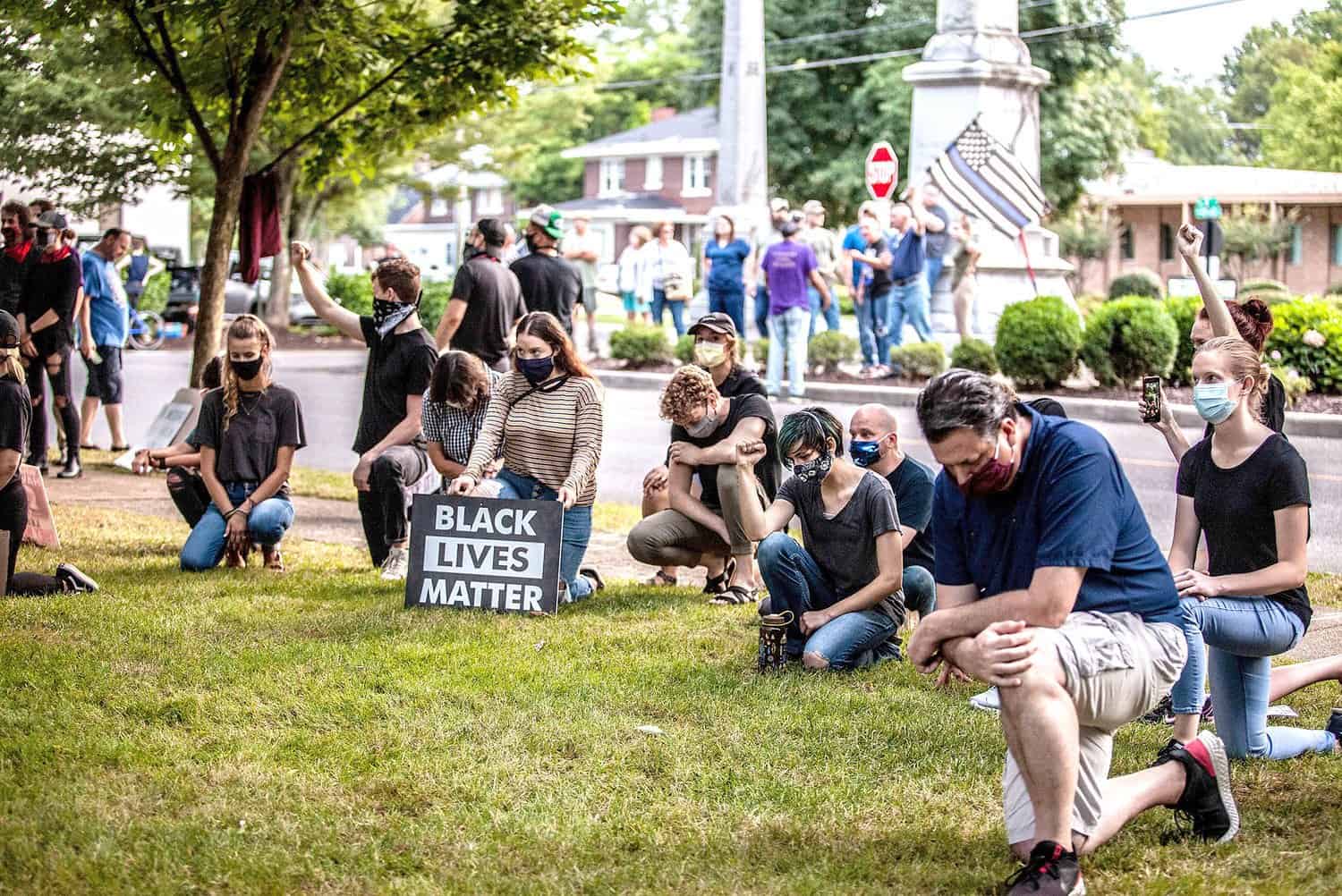 As the fight for racial justice continues across the nation, one small southern city is having its own battle to remove a Confederate statue.

Kelsey Osborne, a Lee University student in Cleveland, TN, created a petition earlier this summer asking that Cleveland’s Confederate statue be relocated to a local museum. Almost immediately, protests began from both sides.

So many came out in favor of relocating the statue, that they formed their own grassroots coalition called Emancipate Cleveland. They peacefully demonstrate almost nightly across from the Confederate statue and have formed a non-engagement policy. No matter how hateful the screams from the Pro-Confederates get, Emancipate Cleveland remains silent with signs that say “Black Lives Matter to Jesus,” “Cleveland Residents for Racial Justice,” “Love Thy Neighbor” among many others.

Emancipate Cleveland is gaining traction in the media both locally and nationally through news interviews and videos of their demonstrations that have gone viral, including one that has over 2 million views.

We recently had the privilege of interviewing Kelsey. Her name has been dragged in the mud by locals in Cleveland, so we wanted to give her a chance to share her heart:

Why did you decide to start a petition for the relocation of the Confederate Monument in Cleveland, TN?

I started this petition because many people I knew in Cleveland had been discussing its removal for a long time due to its oppressive and hateful history that did not seem to reflect the values of Cleveland. I expressed my concern for the monument’s removal in a short tweet saying (from my memory) “when are we going to have the Confederate statue in Cleveland moved?” The responses of agreement to my question encouraged me to start the petition.

What does this Confederate monument represent to you?

It represents oppression and racism. It is a reminder that the south fought against its own country to preserve racism and then wrote its history to sound as though they were fighting for a noble cause — states’ rights. The statue is a reminder that even after the confederacy lost, it integrated into society and became a “heritage” to be proud of, despite its fight to keep “inferior blacks” enslaved. The confederacy no doubt thought this because Jefferson Davis (the confederacy’s “president”) said it himself.

What response have you received from local Cleveland citizens?

It has been a mixed bag. I’ve received both negative and positive feedback. At the very beginning, most of the feedback was negative and I received several nasty personal messages as well as threats. As the petition started to gain traction, however, many locals became vocal in their support.

What response have you received from elected officials in Cleveland/Bradley County?

I’ve received severe opposition from some, but others are truly willing to work and find a solution to the problems this monument has posed. The mayor has been very kind, willing to listen, and understanding through all of it. You can tell he truly wishes the best for the city. Councilman Estes has also been very helpful and has answered and sought solutions to all my legal questions.

What would you say to people who would say Confederate statues represent our heritage and taking them down erases history?

I would remind them that I am trying to relocate it, not remove it (so there’s no “erasing of history” going on) and that if they truly care about their “heritage,” they can simply go visit it whenever they choose. Secondly, the statue doesn’t really represent Cleveland’s heritage (though it acts like it does with its location). It is well documented that Cleveland/Bradley County was predominantly in support of the union.

And in my own biased personal opinion, I find it astounding so many people are proud of a heritage that sought to preserve racial enslavement, rape, and torture.

Why did you decide to make the petition about relocation rather than eradication?

I understand the importance of history and contextualizing it. Relocation is already a compromise because many people either want to completely destroy confederate symbols or they want to continue leaving them in places of honor. My idea of relocation was to preserve the history of the Confederacy, but begin to remove it from places of honor in our society.

Have you experienced racism in Cleveland?

Not before this petition, which is why I was so shocked to see the racist pushback I got from some community members angry with me. Since then, however, yes.

The City says the local chapter of the United Daughters owns the statue. Have you received a response from them? If so, what was the response?

I never received a personal response, but I read their response in the Cleveland Daily Banner. They were adamant that they did not support the relocation. When I read their response I felt as though they were trying to make me seem like I was a villain trying to destroy their history for “a few minutes of fame.” It was incredibly discouraging to read that they thought so negatively of me when I haven’t done anything to destroy history, but rather tell it truthfully. Also, I naively thought they’d be willing to work with me as I wanted to preserve history by placing it in a safer, less controversial area and contextualizing it, especially when much of America is intent on destroying any reminder of the confederacy completely. While I understand the sentiment to cleanse America of its sins, I also recognize the importance of remembering where we come from so we can assure we do not go there again.

Do you see the nightly protests continuing into the fall?

I would not be surprised if they continued in the fall.

What kind of threats have you yourself received? Has it had any effect on your mission?

I’ve received a few “don’t come back here,” “go back home,” “we don’t want you here” threats, and a bunch of name-calling. I’ve also received a death threat but that was much earlier on.

What has the role of your Christian faith had in this season?

This statue is an idol to many Cleveland locals and I felt a lot like Moses when he realized the Israelites were worshipping a golden calf. These people are willing to stalk, doxx, shoot and threaten those who wish to see the statue moved. These people are willing to protect a statue rather than their living neighbors. It broke my heart to see so many professing Christians spew so much hate at me and others and then tell me I was a “witch” or in cahoots with evil when I have pursued nothing but peaceful methods. I try not to interpret the Bible to fit my own bias and opinions, but the Lord has certainly revealed a lot to me in this time. He has especially shown me what it means to love my enemies and pray for my persecutors as I have only begun to learn what that really means. It’s often hard to pray for the people who verbally attack me and threaten me, but I am reminded that nothing I will go through will ever be as hard as what Jesus went through. I am comforted in the fact that Jesus also shared Truth and he was verbally and physically abused unto the point of death for it. It is encouraging to know that he knows exactly how I feel. It also gives me a greater appreciation for his sacrifice.

I’ve had professors privately and publicly support the cause.

What do you want people to know about you?

I want people to know that I love the Lord dearly and I try to make sure my actions always reflect the image of Christ. I am not seeking to relocate this statue out of malice or hate, but out a deep desire to see the best for Cleveland.

If you would like more information on this story, you can visit https://www.EmancipateCleveland.org/

A small southern town and her monument

They Both Prayed to the Same God: Faith and the American Civil War