The Martian: An Alien Concept 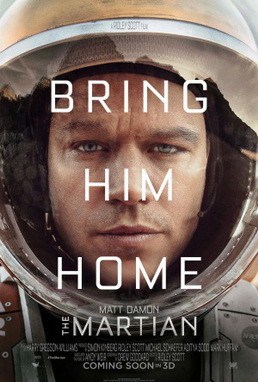 I made a mistake. I read the review of The Martian by my friend Collin Garbarino, “Politics and Religion in Ridley Scott’s The Martian.” It is a good review and touches on some of the same issues that I found compelling in The Martian. The problem is that now as I write this his voice is in the back of my head. That should teach me not to read another review before I write mine.

As always, there are some spoilers in this review…

The Martian is a good film. To be honest I’m a sucker for Scifi so it is fairly easy to make me happy in this genre. But, really this is a story about people.
There is very little action and while the special effects are fantastic they are handled so subtly that you hardly even notice them. This was not a Michael Bay film. I still can’t get over him messing up both Transformers and the Teenage Mutant Ninja Turtles– two of my childhood favorites. Ridley Scott used the special effects brilliantly to seamlessly propel the plot. You can’t have a movie that takes place on Mars without special effects but it was refreshing to be able to focus on the characters not the explosions.

The plot of The Martian is simple. Mark Watney (Matt Damon) was a part of a NASA Mars mission. The team was forced to abandon Mars due to a terrible storm. In the evacuation Watney was hit by debris, knocked away from the fleeing team, sensors indicated that his suit had been compromised, so the team was forced to leave Mars assuming he was dead. Of course, Watney wasn’t dead and the rest of the film was about his survival on Mars for a year and a half while NASA figures out how to rescue him.

The film strikes a good balance between humor, despair, and excitement as Watney strives to survive for 550+ days on Mars, totally alone. Much of the movie focuses solely on Watney which gives the viewer ample time to connect with him- with his despair when things go wrong and help is millions of miles away, with his joy when his first crops grow, with his tears as he is about to leave the barren and isolated planet.

Since I watched this movie the day after Columbus Day, I couldn’t help but think about Columbus as I watched the movie. There is something interesting about the adventurer’s spirit. I’m as critical as the next guy about Columbus but one article I read pointed out that despite all he did wrong he also did something few of us would do. This is true. It is true of the fictional Watney and it will be true of those souls who eventually make manned trips to Mars. There is something noble in thateffort. At one point in the movie Watney, when he thinks he is going to die, he asks his commander to tell him mom that dying for something greater than himself is something he can live with.

In many ways Watney is a truly American character. He is hard-working, self-reliant, opinionated. He has a tendency to curse out his botany advisors on earth when they disagree with his perspective on how best to grow the potatoes he is growing in the habitat. He only survives for the first month and a half on Mars by his own grit and ingenuity. That is very American. We pull ourselves up by our bootstraps. But, Watney can only go so far on his own.  He is stuck on a distant planet and has to rely on others to get him home. Even NASA has to rely on help from China to make the plan work. And the plan? It came from a guy who no one in charge even knew- a low-level scientist working in the back rooms. Plus, it required Watney’s crew, who were almost home, to commit to another 18 months in space bringing their entire time to six years. On several occasions, the Ares III crew made choices that put themselves at risk to save Watney. These aren’t just split moment decisions either. Some of them deeply considered over the protest of their families. In movies, we are used to seeing the hero risk his life to save the helpless. But, it is far more rare for the hero to be the helpless one in need of rescue.

There are several points in the movie where the powers that be play the odds. They refuse to risk lives to save a life. They hide from the crew that Watney lived so that the crew can keep focus. They keep one official away from the media because he said, in public, that they hope to bring him home alive but the powers were not even sure yet if they would try. They decide not to even tell the crew about the final plan. But, the plan is leaked to the crew and they decide against direct orders to go rescue Watney. They make a choice about the value of a single life.

This is the alien concept in The Martian: We need help to succeed, some of that help requires sacrifice from others, and there is value in a every single life. Watney believed in work and problem solving. At the end of the movie he lectures to NASA astronaut hopefuls that when your life is at risk you either accept death or “Do the work.” That work is problem solving and if “You solve enough problems, you get to go home.” That is true. But, to solve many of those problems he had to rely on the collective brain trust of an entire planet and the life risking actions of his team.

In a time when we worry about the mooching 47% and politics are dominated by the ideas of Ayn Rand and Donald Trump this truly is an alien concept. We have heard that it takes a village to raise a child. Now we see that it takes an entire planet to bring a Martian home.