Transformers, Less than Meets the Eye 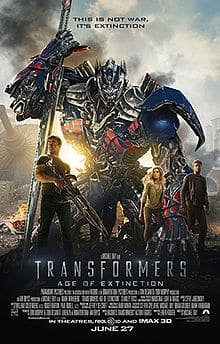 I have a real fond spot for Transformers. As a kid, I watched the Transformers show every day after school and the first movie I ever saw without my parents was the 1986 animated film Transformers: The Movie. I still remember, in Junior High, going to see it at a downtown Stockton, CA theater and my brother, who was in college at the time, taking me to the comic store afterward.

While this film is a continuation of the previous Transformer films it is set five years after the battle in Chicago. The former alliance between the humans and transformers has collapsed and secretly the CIA has been hunting both Autobots and Decepticons. The new main human character in the film is Cade Yeager (Mark Wahlberg) who is a down on his luck inventor that buys an old semi-truck for parts. The truck turns out to be Optimus Prime (voiced by Peter Cullen) and Cade works to fix him up. A CIA kill squad shows up to take out Optimus. They escape and we learn that Lockdown (an unaffiliated Transformer voiced by Frank Welker) has made an alliance with Harold Attinger (Kelsey Grammer) who runs black ops for the CIA. Attinger has also made an alliance with Joshua Joyce (Stanley Tucci) who heads the technology firm KSI. With the help of Attinger and Lockdown KSI has been getting alien technology that has allowed them to build a small fleet of human-constructed Transformers. But, in this entire process Megatron, who is not dead like the humans thought, has been feeding the humans the information they needed to build him a new army. The KSI flagship Transformer is Galvatron who is actually a reincarnation of Megatron.

Lockdown is participating in this arrangement because he is a bounty hunter who is hunting Optimus Prime to return him to the Creators, a mysterious alien race reported having built the Transformers. Attinger seems to both genuinely hate aliens, and as such is willing to kill Autobots, and be resentful of the fact that his public service has not made him wealthy. Joyce is an investor blinded by his own arrogance and desire to innovate, even at horrible costs. After the Autobots destroy the KSI facility in Chicago they move to their facility in Beijing ( a move that seems to be as much about appealing to Chinese audiences as it has to do with the plot). But, the heroes figure out that Galvatron is planning to detonate the “Seed” a bomb that KSI acquired from Lockdown which turns organic matter into Transformium (the metal from which Transformers are constructed) in the middle of Beijing. Since there are only five remaining transformers Optimus releases the “Legendary Knights” who has been captured by Lockdown. They turn out to be the Dinobots. The Autobots and Dinobots then proceed to kick the butts of the 50, or so, human-made transformers who are now controlled by Galvitron. They also defeat Lockdown’s space ship which is destroying massive parts of Beijing.

If it seems like I lost interest in the plot halfway through telling it…your right. The same thing happened during the movie. The movie runs for 2 hours and 45 minutes but should probably have come in under two hours. I actually like long epic films. But, this movie was just long not epic. The CGI work was tremendous but so much of the movie just seemed to be an excuse for the CGI. At this point though CGI is old news. It is needed to tell the fantastical science fiction stories we see in the theatres on a regular basis but we now know that anything can be done so nothing is shocking. One example is when in one of the earlier movies Bumble Bee transformed while a human was in him and was able to catch the human safely from mid-air. This worked once several years ago but they tried pulling this trick three or four times in this movie and all I could think about was that yes they were caught but their necks would have been broken. There was just too much flash and not enough substance which left me complaining when I exited the theatre and I’m not a terribly picky audience.