Omar: The Limits of our Sacrifice or The Boy, The Money, The Sugar, and The Stone 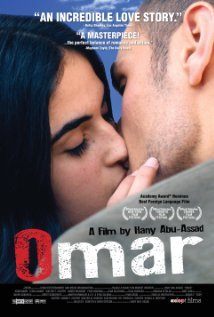 As always these reviews have spoilers…

Omar is a Palestinian film that had limited release in the United States but has been well received critically.

The twisting plot is simultaneously about a group of freedom fighters and their interactions with the Israeli government and about a love triangle. One of the most powerful elements of this movie is how it demonstrates how personal politics are. There is no clear distinction between the political environment and the personal lives of the characters.

There are five primary characters in the movie. Omar (Adam Bakri)is the lead character through whom we see the story unfold. Amjad (Samer Bisharat) is Omar’s childhood friend. Tarek is the leader of the freedom fighters and mentor to both Omar and Amjad. Nadia (Leem Lubany) is the love interest of both Omar and Amjad and the sister of Tarek. Agent Rami (Waleed Zuaiter) is the Israeli agent who encounters Omar in prison and drives much of the action.

At the beginning of the film we learn that both Omar and Amjad are in love with Nadia, though from the viewer’s perspective (Omar’s perspective) it is clear she really loves Omar. The three freedom fighters also embark on a mission where they kill an Israeli soldier. While it seems they got away with it they are soon running from the authorities. Omar is not able to get away. While in prison Omar courageously resists torture and refuses to confess or reveal the other conspirators. But, Omar is tricked by Agent Rami, who dressed up like a Palestinian prisoner, to say “I will never confess” which according to the Israeli courts is the same as a confession. Omar then makes a deal with Rami, which he does not plan on keeping, to get out. When out Omar’s plans backfire. He ends up back in prison but makes another deal to try to figure out who is betraying the freedom fighters. Omar soon discovers that Amjad is the mole. When Omar confronts his friend Omjad confesses that he has done it because he got Nadia pregnant and the Israeli’s were holding it over him. Omar makes Majad confess to Tarek and in the issuing fight Tarek dies. Omar and Amjad use agent Rami to cover this up and then Omar makes it possible for Amjad to marry Nadia.

However, a few years later agent Rami reappears and begins to manipulate Omar again. Omar returns to Nadia who he has not seen in two years only to find out that she was not pregnant as Amjad had said. Omar convinces Rami to give him a gun to kill Amjad but the movie ends with Omar using the gun to kill Rami. The movie ends with no resolution which is perfect for a movie about the tension between Palestine and Israel.

The Limits of our Sacrifice

I tend to look for redemptive themes in movies. However, they are very hard to find in Omar. It is a movie that is filled with distrust and little to no grace offered. So, initially I though about the disjucture that happens in a graceless environment. However, it occurred to me that there is one character who repeatedly sacrifices himself- Omar. He sacrifices himself both times he is in prison to protect the other freedom fighters. Most importantly though he sacrifices his love for Nadia for what he believes will be her own good.

Ultimately though, Omar’s sacrifice leads to nothing. On a theological level, I cannot help but compare that to Christ’s sacrifice and the tremendous difference. The sacrifice of a mere human can be powerful. But, it is limited. In the course of history few of our sacrifices will have significant effect. Christ’s sacrifice however is a very different story.

The Boy, The Money, The Sugar, and The Stone

Early in the movie Amjad tells a story about how moneys are caught in Africa. He explains that the monkeys are given sugar and eventually become addicted to it. Then when they are trying to catch the monkeys they put the sugar in a trap and the monkey reach their hand in and won’t let go of the sugar and so they are caught. Omar tells this story again at the very end of the movie before he shoots Agent Rami. This whole time Rami believed that Omar was the money. Rami felt he had trained Omar to do what he wanted. But, in the end Omar learned to let go of the sugar and he was the one who got the upper hand on Rami who was in fact the trained monkey who was not able to let go of the sugar (Omar).

This monkey story reminded me of a monkey story I heard when I was in Indonesia in 2008. There was a public park full of monkeys. But, the guides did not want us to go into the park because several years back young boys had thought it fun to throw rocks at the monkeys. But, they had actually ended up training the monkeys to throw rocks back at them. Now, when people enter the park the monkeys trow rocks. In some ways it seems that this is exactly what the movie is saying is happening in Palestine. From the perspective of this movie the Israeli’s have trained the Palestinians to throw rocks.