The Wind Rises: A beautiful lie 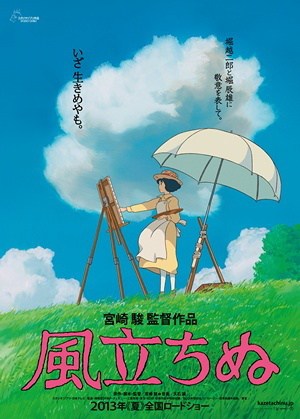 Hayao Miyazaki is a major name, maybe the major name, in Anime, Japanese Animation. The Wind Rises  is his eleventh film and reported to be his last film. It is a beautifully animated piece with a compelling story. At the heart of the movie, it is a love story.

Miyazaki chose to use the life of Jiro Horikoshi to tell his own story. So while Jiro is the main character there are also elements of life that are fictionalized such as the romance between Jiro and Naoko. The movie follows two narrative arcs. One is the romance between Jiro and Naoko. The other is Jiro’s love of aviation and the development of the Zero Fighter.

Jiro’s credentials as a hero are solidified early in the movie when he defends a small boy from bullies and again later when he rescues Naoko and her maid during the Tokyo earthquake of 1923. Jiro helps them get home and then selflessly leaves without giving his name. later in the movie, they track down Jiro and leave him a gift but when he tries to get back in touch with them he finds that the home is no longer there. Finally, one summer after Jiro is an aeronautical engineer Jiro and Naoko serendipitously summer at the same resort. They fall in love get engaged and eventually marry despite her tuberculosis. She then lives with him while he finishes the designs of the Zero but leaves at the end of the movie to die at a sanitorium.

The second plot line is arguably even more important. It is about Jiro’s “art” and his love of planes. The movie opens with a dream sequence where the young Jiro is flying a plane and meets his Italian hero, the famous aeronautical engineer Caproni. These dream sequences are an important element throughout the movie including the closing scene. Jiro later goes to school and then his company sends him and others to Germany to learn about their designs. There is a consistent theme of Japan being provincial and behind and trying to catch up to the rest of the world- something that happens when the Zero is designed.

The story is compelling and beautifully executed. But, throughout the entire movie, I could not get over the fact that they were designing a plane that is the military icon of Japanese imperialism. But, mostly what bothered me was that there was no moral conflict within Jiro. Early and powerfully he was established as a hero character but he was able to easily dismiss the fact that the planes he was building were not just machines of war but the means of imperial expansion. In our film class, we have two Korean students. Korea was colonized by Japan and they viewed the movie as “disgusting.”

The movie seemed to postulate that Jiro was able to separate his desire to make beautiful airplanes from that for which those planes were used. This is a fallacy. Our creations do not happen in a vacuum and in the case of Jiro he knew precisely how these planes were to be used. Further, the entire concept of Japanese expansion and imperialism did not ethically bother Jiro. At one point Jiro talks about how Japan is at war with so many other countries. Jiro remarks that this will make Japan “blow up” but he has no ethical concern. It is a mere pragmatic concern that Japan cannot fight on so many fronts.

This is the danger of this film. It is beautifully seductive. But, it separates that beauty from the ethical life. Jiro should not have been able to separate his desire to build a beautiful airplane from ethical concerns about that airplane and Miyazaki should not be able to make a beautiful animation that show no ethical qualms with the history of aggressive Japanese imperialism.