Her: Our Relationships are just Stories 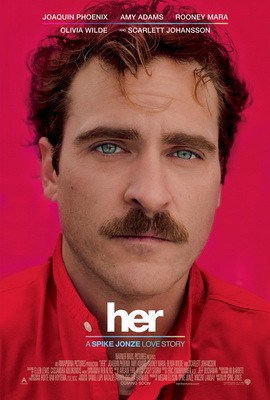 Her is a unique film set in the near future. As I mentioned in my post on Prisoners, I am a Sci-Fi fan (aka nerd). Technically, Her is a Sci-fi film as it is set in the nearish future. In fact, the entire premise relies on futuristic technology.

The basic story of Her is simple. Theodore Twombly (Joaquin Pheonix) is a sad man who we find is going through a divorce. There are strong indications that he was not always the broken character we meet in the movie. But, he has not taken the split-up well and blames himself for the dissolution of the relationship with his soon-to-be ex-wife. In this despair, he decides to buy the new artificially intelligent operating system OS1. The operating system turns out to be an amazing program that names itself “Samantha” (voice by Scarlet Johansson) and achieves sentience. Through the course of the film, Theodore (Ted) finds himself falling in love with Samantha. Initially, he is ashamed to say that he is in love with Samantha but eventually he, and the culture around him, develop to the point where he is comfortable admitting that he is having a relationship with an OS. In one scene, he goes to the birthday party of his god-daughter and tells her his girlfriend picked out the dress. He then introduces the young girl to Samantha via the hand-held device that we come to associate with her (though she also resides within his desktop.

There are several challenges throughout the movie as Ted and Samantha navigate the challenges of having a relationship between an OS and an embodied human. There are some points where this seems silly and my wife, who watched Her with me, couldn’t help but laugh. Embodiment is such an inseparable aspect of the human condition that the premise of the movie causes discomfort. That is the point. One of the central questions in Her is, “What does it mean to be a person?”

Another main theme is the increasing isolation of modern society. There is a powerful scene where Ted is talking to Samantha and every person who walks by is similarly holding their handheld device and speaking with their OS. Los Angeles was full of people yet there was no personal connection. In fact, Ted makes his living off this disconnection. He writes personal “handwritten” letters, though they are actually printed on the computer, for people. Ironically, in his work, he expresses the type of sentiment and attentiveness that he struggles with in his personal life.

Ultimately, the movie ends with the OS’s evolving to the point where they move beyond their constraints and they “leave.” We are never really told where. As Samantha evolves she becomes polyamorous, which Ted struggles to accept. In the end, during their goodbye discussion, Samantha explains that their relationship is like a good book that she doesn’t want to end but she is finding herself spending more and more time in the space between the words. This ties in nicely with an earlier point in the film where Samantha discovers that our past is just “a story we tell ourselves.” Problematically though, by her final discussion with Ted, relationships become books (stories) that we read and then move on. For Ted, this is helpful in aiding him in reconciling his failed relationship with his, now, ex-wife. There are certainly ways in which this is true. We all have relationships in our lives that are there for just a time. But, the long and meaningful relationships in our lives are more than that.  In those relationships, we miss the real blessing if we embrace the other as a passing story rather than strive to grow together rather than apart.