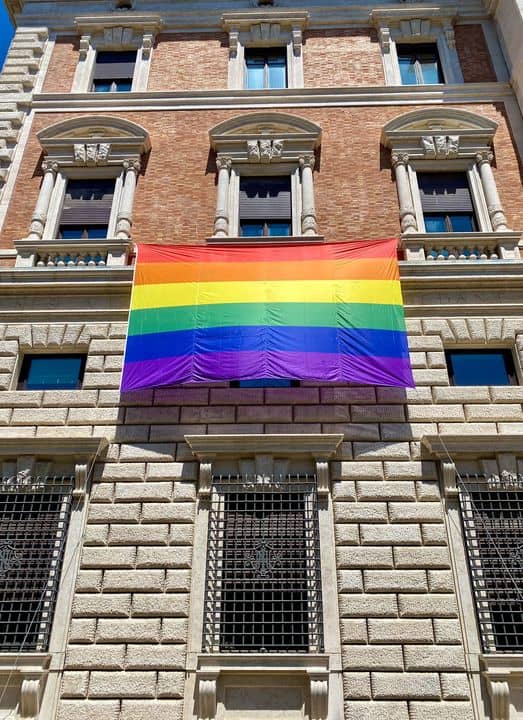 The United States of America’s embassy to the Holy See commemorated the start of this year’s Pride month by raising a pride flag in its office building. The embassy’s social media accounts also posted a photo of the flag in their building in Rome.

The official social media accounts for the U.S. Embassy to the Holy See boasted of their celebration of Pride month on Wednesday, posting a photo of the rainbow banner adorning their historic office building in Rome.

“Today is the start of [Pride Month.] The United States respects and promotes the equality and human dignity of all people including the LGBTQIA+ community,” the embassy said.

“Homosexual persons are called to chastity,” the Catechism of the Catholic Church (CCC) states. “By the virtues of self-mastery that teach them inner freedom, at times by the support of disinterested friendship, by prayer and sacramental grace, they can and should gradually and resolutely approach Christian perfection.”

The CCC is the universal summary and explanation of Catholic teaching. It is meant to be the final reference point for established Catholic doctrine.

“Pride Month is an opportunity to honor the history of the LGBTQI+ community and their fight for equality,” U.S. Trade Representative Ambassador Katherine Tai said in a White House statement Wednesday. Fifty-three years after Stonewall, we still have not fully realized a world free of violence and prejudice against LGBTQI+ people.”

“President Biden and the entire Biden-Harris Administration are committed to ending discrimination, hate, and bigotry against our fellow citizens,” the statement continued. “It is why on his first day in office, President Biden signed executive orders to advance equity in policy and to prohibit discrimination in the federal workforce on the basis of gender identity and sexual orientation.”

The United States and the Holy See have had official diplomatic relations since George Washington was President. Even though the Roman Catholic Church is an ecclesiastical organization, the Holy See has a political existence tied to the Vatican City, which is recognized as an independent country.