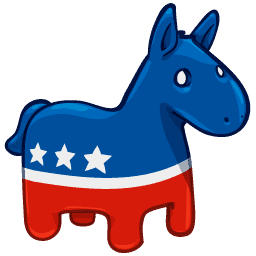 I am a Democrat.

Even more…by most metrics, I’m a progressive or liberal Democrat. There I said it.

My Facebook friends won’t be surprised by this. I haven’t hidden my political orientation but I’ve also never really come out publicly and said it. There is something pressure-inducing about the prospect especially as one who works in evangelical circles. Anyone who watches politics knows that evangelical and Republican are almost synonymous. That makes it all the stranger when you are an evangelical and not a Republican.

I remember in my first year teaching at a Southern Baptist college several of us went to a friend’s house for Thanksgiving. One of the theology professors said something derogatory about Democrats. My wife and I looked at each other and then told him we were Democrats. One of the funniest things ever was to see him back peddling. To be fair, he is a good guy and we became friends. It is just that within evangelical circles one is assumed to be a Republican.

If evangelicals are Republicans, or so it is assumed, how did I end up as a Democrat? Part of the answer is that I come from Democratic stock. My father, Cruz Reynoso, was an important figure in the Chicano Civil Rights movement, he was the first Hispanic on the California Supreme Court, Vice-Chair of the US Civil Rights Commission, and received the Presidential Medal of Freedom from President Clinton. So to an extent, political involvement was a part of my upbringing. I had a friend remind me, a couple of years ago, that during the 1984 campaign, when I was in 6th grade, I organized a recess dodge ball game where Walter Mondale supporters challenged Ronald Reagan supporters. I know… really nerdy for an eleven-year-old!

The political side though is only one part of the story. My mother was a Baptist from the Appalachian hills of east Tennessee. I was raised in a very conservative rural Southern Baptist church. I’ve spent most of my life in Southern Baptist Churches. When I lived in NYC, I even was a member and taught the youth at an Independent Fundamental Baptist Church. So, it isn’t that I only had exposure to the liberal Democratic worldview. I am very familiar with the conservative perspective and I love many people who hold that perspective. Among my siblings, we have all maintained Democratic affiliation. I think out of respect for my father. But, my siblings do comment that the Democratic party does not represent their views and they call themselves a “Conservative Democrat” or an “old-fashioned Democrat” and vote conservatively, even Trump conservatively.

How can you be a Christian and a Democrat?

I have landed where I am politically not by default from my upbringing or despite my religion. I have arrived here because of my faith. In the conservative evangelical circles where I have spent my life, Democrat is a seldom heard word, at least in a non-insulting way. Liberal is darn near a curse word. One of the most derogatory things a conservative evangelical can say about someone is to call them a liberal. There really is very little attention paid to distinctions between theological and political liberalism. For many, the assumption is the two go hand in hand. For me, they are quite different. In the blog post “Am I a Liberal?“, I address my theological convictions and leave it for the reader to judge, though I think it is clear that I am not a theological liberal. For me, my political convictions are an outgrowth of my faith even if the two don’t seem to go together to some.

How can this be!?

I know this will leave some with questions. How can you be a Christian and a Democrat? What about this issue or that issue? In the future, I will try to write essays answering those questions. I had someone on Facebook send me a message which included:

I grew up in a typical republican southern baptist democrat demeaning family. And I’ve not spoken with many evangelical democrats. So I’m curious about what exactly are your democratic views.

I told this person that I was actually going to write about this and this post is the beginning of that process. But, he isn’t the only person. I’ve had people ask me about specific issues such as how could I support Bernie Sanders (or really any democrat) considering his stance on abortion. For some, it is the bearded woman syndrome and they just want to look at what to them is strange and bizarre. But, I think for most, they genuinely want to understand how a Liberal Democratic perspective is at all consistent with my faith.

When I first started this website, I wrote in the about section:

Honestly, as an artist and art historian it is a bit nerve-racking to put my faith “out there” for the public to see. Religion and contemporary art have a very uncomfortable relationship, sometimes with good reason (from both sides). Finally though, I conceded that transparency is one of my core values and as such this blog seeks to be transparent.

Something very similar can be said about evangelicalism and the Democratic party. They have a very uncomfortable relationship; but, transparency, one could say authenticity or vulnerability, is a core value of mine. This is what I am. This is what I believe. And, I will, in future posts, try to explain why I believe the way I do. For some, I am a curiosity, for some an embarrassment, for some a danger. But for others, maybe I can be a light, someone who has questions and seeks answers and follows where those answers lead even if it is not within the traditional evangelical package.

I’m a Liberal Democrat. But, neither the Democratic Party nor the progressive “agenda” own God. Neither does the Republican party or conservatism. Each of them is correct only so far as they reflect the heart of God.

The friend who reminded me about my politically-themed dodge ball game is now an atheist. He was raised in a church but when he reflected on his faith, it could not hold to the scrutiny. He commented to me once that “unreflected faith is not a virtue.” He is right. Blindly following without questioning or internalizing is not a virtue. I’m not even sure it is faith. So many have the veneer of the faithful and when they scratch it they find that there is no faith underneath. So, the church encourages people not to scratch and as a result, they never have to confront the vacuum in their souls. They are whitewashed but don’t know what is beneath. That isn’t virtue. Scratch. Scratch hard. Test your faith challenge your assumptions. If you end up a Democrat or even a Republican it is okay. Because a reflective faith is a virtue even if it doesn’t look exactly like your parents or your pastors or your friends or even if it does.

As a final note. I’m a Liberal Democrat. But, neither the Democratic Party nor the progressive “agenda” own God. Neither does the Republican party or conservatism. Each of them is correct only so far as they reflect the heart of God. I know good faithful people who are conservative Republicans. Reasonable people can come to different conclusions.

This essay is from our Anastasis Series where we resurrect articles from the past that are either still relevant today or can be easily updated. This piece was first published on October 7, 2015, and has been lightly edited and updated.