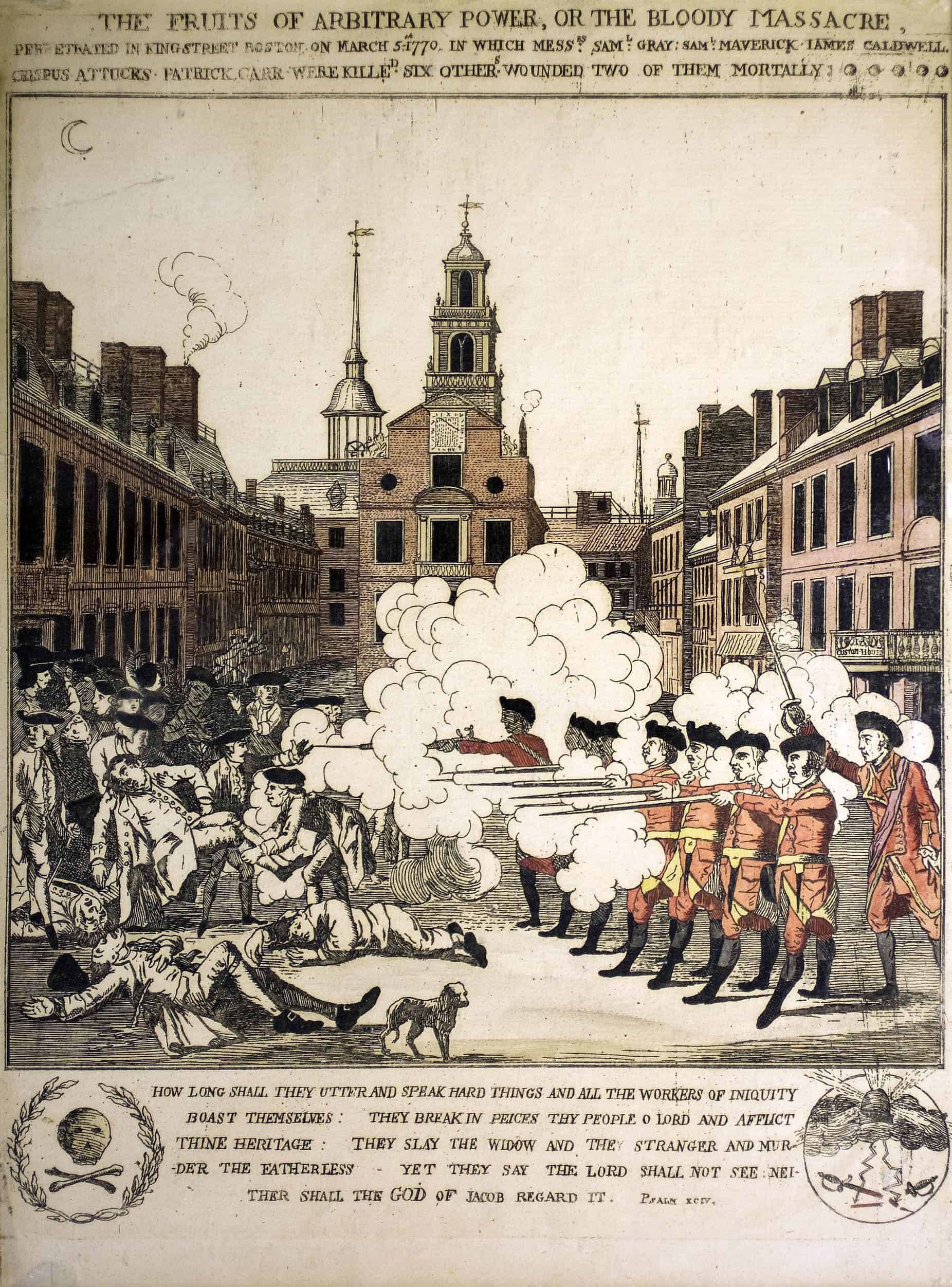 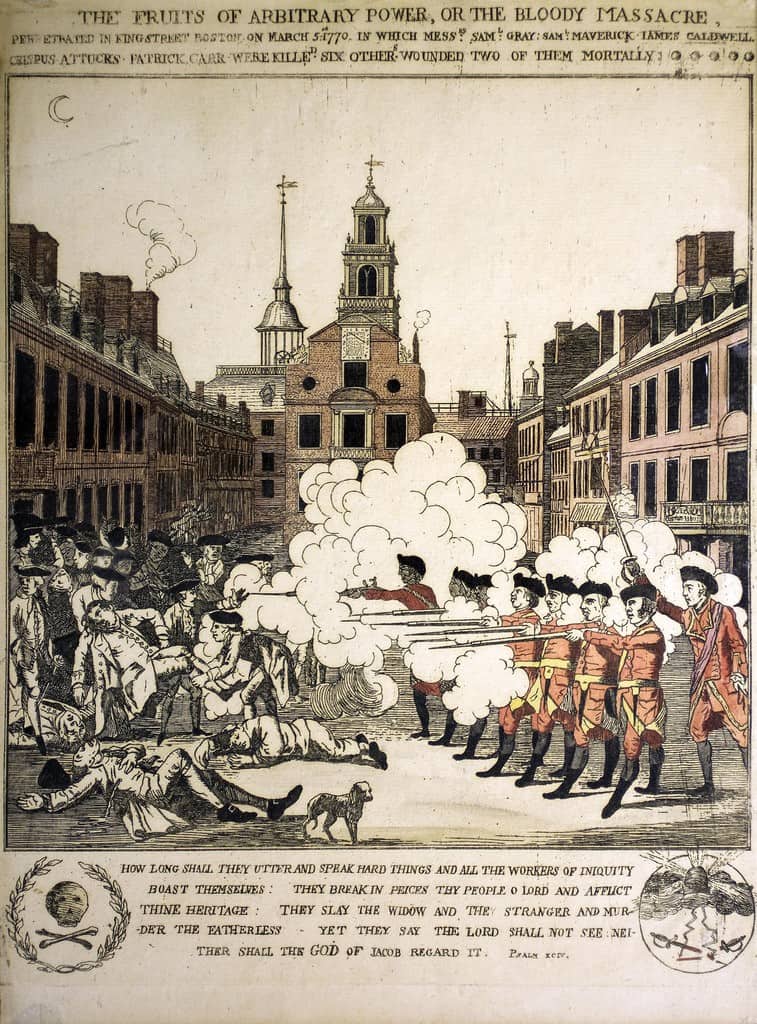 Private Hugh White stamped his feet and rubbed his hands together to warm them in the blistering cold of a March evening in Boston. Snow blanketed the ground around the Custom House he was tasked to guard. Royal revenue collected at the cost of antagonizing King George III’s colonial subjects rested within. An eleven year old boy named Christopher Seider had been killed on February 22. He was hit by a stray bullet from the gun wielded by a customs official trying to protect a loyalist business from rioting colonists. Tensions ran high in Boston. The year was 1770, exactly two hundred fifty years ago.

A crowd of colonists slowly collected around White. Taunts turned to threats, and White thrust his bayonet forward as the crowd advanced. The colonists responded by pelting the young soldier with rocks and snowballs. White’s commanding officer, Captain Thomas Preston, arrived with six soldiers to reinforce White. They formed a semi-circle around the Custom House with fixed bayonets while Preston and Private Hugh Montgomery tried to quiet the crowd, which had grown by some estimates to as many as three hundred people.

Richard Plames, an innkeeper, confronted Preston and Montgomery with a cudgel. As he threatened the two officers, a renewed barrage of projectiles made Montgomery drop his musket. Some witnesses insisted later that Montgomery picked up his musket, yelled fire, and discharged it at the crowd. Testimony from the soldiers and other members of the crowd contradicted this account, claiming that the response from the officers was more spontaneous and promoted by the taunting dares of crowd members who were yelling, “Fire!” The confused soldiers reacted to what they believed to be a command to fire and discharged their weapons into the crowd. Eleven colonists were hit in the ensuing volley. Three of them died at the scene. They were Samuel Gray, James Caldwell, and Crispus Attucks, a stevedore of African and Native American descent. Samuel Maverick died the next morning, and Patrick Carr followed two weeks later. Their deaths raised the total to five. Thomas Preston and his eight men were arrested the next day with Acting Governor Thomas Hutchinson pledging to investigate the case with due fairness.

Colonial responses demonstrated the complexity of the situation in Boston and throughout the American colonies. Boston activists moved fast to circulate word of the event and galvanize public opinion against the soldiers. They were transformed into symbols of the oppressive reach of the English monarchy. Engraver Henry Pelham produced a plate that featured the soldiers in tight formation firing a volley into the crowd of colonists. Paul Revere, himself an engraver as well as a silversmith, copied Pelham’s image with his own tweaks, giving it wider circulation. He angered Pelham by neglecting to give him credit for the idea and putting his version on sale first, insuring that Revere’s variation would outsell Pelham’s. The engraving carried the title The Fruits of Arbitrary Power or The Bloody Massacre. The crowd depicted by Revere looks smaller and helpless compared to the larger rowdy mob that appears in legal depositions. The soldier’s faces were set and merciless. They seemed to be relishing the prospect of dispensing the king’s fury. Captain Preston stands behind the soldiers rather than in front, his sword raised in a clear signal to fire on the crowd. The term “massacre” stuck despite the fact that the loss of life was limited to five or six if one counts the 1780 death of Christopher Monk who claimed that his ill health was due to the injuries he sustained ten years earlier. The nuanced details of the event were lost in the growing legend of the Boston Massacre.

While the Boston Massacre story stoked colonial resistance, more sober considerations faced local leaders in Boston. Colonial officials and patriot leaders among the Sons of Liberty knew that the world would be watching how Massachusetts administered justice in this case. Representatives from both groups started a campaign to convince local Attorney John Adams to take the case. Adams enjoyed a good reputation in Boston and was known to be sympathetic to colonial concerns, though he was not nearly as bombastic as his cousin Samuel. Adams took the case knowing that he risked running afoul of both royal representatives and his own neighbors in Boston should he fail to strike a proper balance in his dealings with them. Adams’ defense of the soldier earned general praise at the time and gets high marks from most historians.

Adams faced the task of cooling the passions of his fellow colonists and reminding them that justice needed to de dispensed based on facts rather than feelings. Quoting a French proverb in his closing argument, Adams said, “I will enlarge no more on the evidence, but submit it to you.—Facts are stubborn things; and whatever may be our wishes, our inclinations, or the dictates of our passions, they cannot alter the state of facts and evidence . . .” While acknowledging the tragic loss of lives, Adams insisted that no sober reconstruction of the event could support the notion that the soldiers committed a premeditated act of murder. He argued for the lesser charge of manslaughter. The jury responded with an acquittal of six soldiers and conviction of manslaughter for two others. These two men pleaded benefit of clergy, which transmuted their sentences from death to branding on the hand.

Boston Massacre commemorations became an annual observance. Each commemoration featured a sermon, leading to a rich repository of sermonic reflections on the event and how its memory impacted the growing movement for independence. On the third anniversary, Adams acknowledged that the colonists were justified in calling the tragedy a “massacre” while recalling his defense of the soldiers as, “One of the most gallant, generous, manly and disinterested Actions of my whole Life, and one of the best Pieces of Service I ever rendered my Country.”

Americans will mark the two hundred fiftieth anniversary over the next two decades of all the major events that marked the founding of our nation. Such commemorations offer opportunities to assess who we have been and where we want to grow as a people. Our times seem dominated by passionate souls on all sides of the spectrum whose noise and zeal drown out the quieter voices of sober reflection. Paul noted similar issues in the early Christian church when he wrote to the Romans in chapter 10, verse 2, about those who had a zeal for God but not according to knowledge. Our passions serve us well when they inspire and motivate us to act in noble ways. But facts are indeed stubborn things, and their steady, persistent voices continue to call to us long after the noise of our passions has been exhausted. Our passion needs to be united with a determination to know the facts as best we can in our limited imperfection. The coming decades offer opportunities for reassessment, renewal, and possibly even reconciliation.