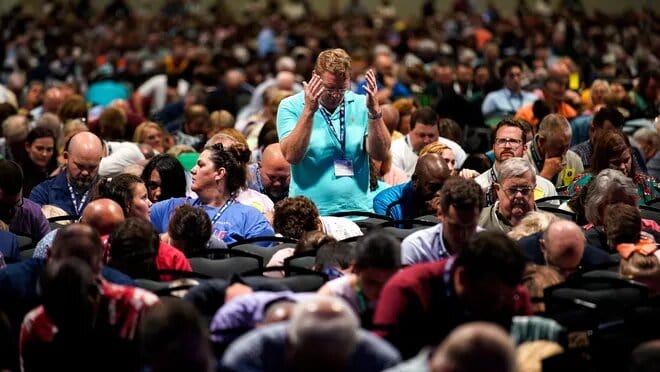 The secular investigative firm Guidepost Solutions made waves around the world recently after releasing a report detailing years of alleged abuse within the Southern Baptist Convention. Randy Davis, the president and executive director of the Tennessee Baptist Mission Board, initially supported this report, stating that the findings presented “an important issue for the SBC to address.”

However, after a recent tweet, many of the same members praising the report are now calling for the SBC to cut ties with the firm. This comes after the firm tweeted its support for LGBTQ+ Pride Month. Bob Smietana of Religion News Service reports that Davis publicly called on the SBC to “break all ties” with the firm in response to the tweet. It is also noted that Davis has been quoted in the past as saying that members of the LGBTQ+ community “have value and worth”. Smietana continues:

Baptist leaders in Alabama also called on the SBC to cut ties with Guidepost. A Baptist abuse task force in Kentucky announced it will no longer work with the company.

Though a secular company, Guidepost has become a go-to firm for evangelical groups dealing with the issue of sexual abuse and is perhaps best known in Christian circles for a report on the culture at Ravi Zacharias International Ministries that found that RZIM board members were blinded by loyalty to Zacharias, a once-beloved author and speaker who has been credibly accused of sexual abuse.

While the tweet from the firm attracted a fair share of negativity, not all Southern Baptists reacted accordingly. Smietana writes:

But others, including South Carolina pastor Marshall Blalock, vice-chair of the abuse task force, defended Guidepost in a series of social media posts. He said the task force would have preferred to hire a Christian company but none had the capacity to do the job.

“Guidepost did a professional investigation, they operated with integrity, they respected our faith and values, they even ate a significant amount of the cost because they wanted to help us discover the truth and assist us to be more Christlike in how we respond to sexual abuse,” he tweeted.