Put away your swords -Lamenting the celebration of Kyle Rittenhouse 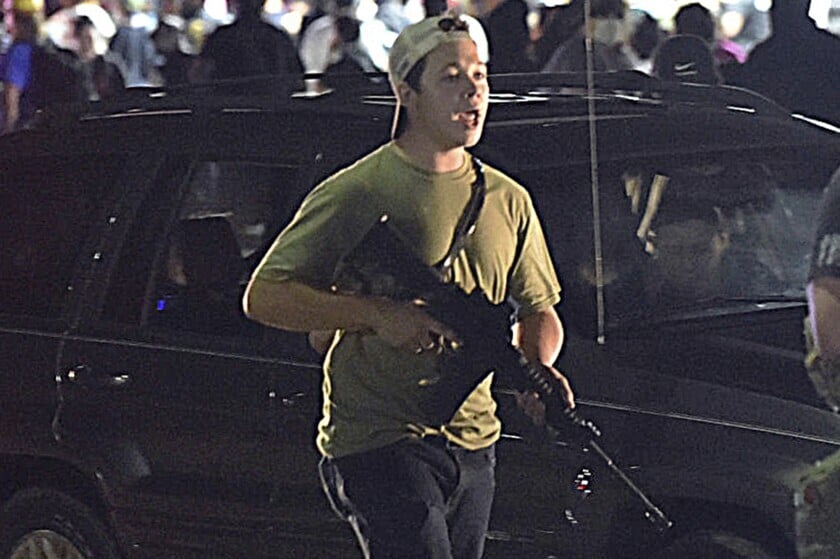 When the life of Jesus was threatened by an angry mob, Peter, one of His most impetuous disciples, stepped up to defend the life of Christ with a sword. Peter famously cut off the ear of Malchus, probably because under the stress of the late-night riot his aim was askew. Jesus did not celebrate Peter for his actions but rather corrected him saying “Put away your sword, for those who live by the sword will also die by it” (Matthew 26:52). Of course, the context of this passage is very important as it reminds us NOT to make a leap that self-defense or the defense of others isn’t warranted at times—but it should be noted that when faced with a real physical threat, the response of Jesus to Peter, who was attempting to mount a defense, was to “put away your sword.” Jesus was making the point that the introduction of a weapon invited escalation in such a volatile situation.

Similarly, much of the context surrounding the actions of Kyle Rittenhouse on that fateful night in August of 2020 have been lost as partisans scramble to their prospective binary camps following his acquittal of the murder charges against him. Given the stringent self-defense laws of Wisconsin, the acquittal shouldn’t come as much of a surprise. But what is disappointing is how in the aftermath, many, including an alarming number of evangelicals, are celebrating Rittenhouse as a hero.

For example, false claims about Rittenhouse defending his grandparents’ gas station are repeatedly shared via the social media networks, and Fox News’ Tucker Carlson is finishing up the production of a documentary about Kyle Rittenhouse that frames him as patriot on a hero’s quest. The trailer for the documentary opens with Rittenhouse lying pensively on a couch in the shadows as the Wisconsin sun starts to shine on his face. The camera pans to a solitary cross on the wall as iconic images of community and church are interspliced with the images portraying the boyish innocence of Rittenhouse. The imagery is intentional. It is meant to invoke romantic notions of what it means to defend American values, a throwback to a John Wayne swagger that didn’t backdown, didn’t apologize, and killed if necessary.

It seems that now Rittenhouse is being lionized as the poster child for what James K.A. Smith has described as a “Christianity [that] has accommodated itself to these American ideals of battle, military sacrifice, individual freedom, and prosperity…Many Christians experience no tension between the gospel according to America and the gospel of Jesus Christ because, subtly and unwittingly, the liturgies of American nationalism have so significantly shaped our imagination that they have in many ways, trumped other liturgies. Thus, we now see and hear and read the gospel through the liturgical lenses of the “American gospel.” This kind of American gospel often finds its cultural expression in the embodiment of actions like those committed by Rittenhouse.

If we take Rittenhouse at his word, that his only motivation on that night was to help people, then why did he deem it necessary to carry a gun? As Paige Williams writes in The New Yorker, “according to a theory of social psychology called the ‘weapons effect,’” the mere sight of a gun inspires aggression. Additionally, in 1967, the psychologists Leonard Berkowitz and Anthony LePage wrote, “in essence, the gun helps pull the trigger.” Their methodology had flaws, but later studies verified their premise. For example, in one U.K. study, people were more inclined to assault a police officer who was visibly armed with a Taser. That sentiment is carried here, nationally. For example, Brad Bushman, an Ohio State researcher who served on President Barack Obama’s committee on gun violence, told me, “We’ve found that it really doesn’t matter if a good guy or a bad guy is carrying the gun—it creates the bias to interpret things in a hostile way.” Citizens who openly carry firearms “think that they are making the situation safer, but they are making it much more dangerous.”” However, the implied violence of Rittenhouse’s motivations is not the most integral aspect of this narrative.

Some have attempted to dismiss the obvious racial context of these shootings by pointing out that no one killed (in this instance) was Black; however, this narrative dismisses the context of what precipitated the protests—the police shooting of Jacob Blake. Blake was shot seven times by Kenosha police after refusing to comply with orders to surrender. He was shot while attempting to leave the location in a rented SUV while wielding a knife in the direction of officers, as his children witnessed this from the back seat. While the shooting may have been justified, it is hard to imagine why seven shots in the back were necessary and this tragedy underscores the Harvard Study indicating Black people are more than three times as likely as white people to be killed during a police encounter. Three times.

It was this very . . . contradiction that precipitated the protests which followed. This happened on the heels of the nationwide response to the killing of George Floyd at the hands of police in Minnesota earlier that summer. It was in this context Rittenhouse felt compelled to respond to social media pleas for citizen patriots to defend properties in Kenosha, Wisconsin. Imagine if young Black men would have responded with assault-like weapons in the aftermath of the killings of Jacob Blake; would they now be heralded as emblematic of American values? The sad fact is this country has a long history of white people being killed who stand in solidarity with Black lives—the Civil War being the most obvious example.

Christians should never find themselves in the position of celebrating the loss of life. Unfortunately, in this case, too many are eagerly doing so as the sad conflation of what it means to be an American and what it means to be a Christian continue to be confused, and with deadly consequences.

Anyone who believes Kyle Rittenhouse wouldn’t have been treated differently if he were Black is disengaged from reality. This case is a microcosm of the different worlds populated by white and Black people in America. Imagine this: Kyle Rittenhouse viewed emulating law enforcement and carrying a gun as a rite of passage for which his community rewarded him—and then the legal system exonerated him. Contrarily, Jacob Blake resisted the orders of law enforcement and wielded a knife, and he will never walk again. Kyle Rittenhouse ran through the streets of Kenosha with an assault rifle after shooting three people and killing two without being arrested or detained in that moment by police. Meanwhile, Ahmaud Arbery jogged unarmed through the streets of Brunswick, Georgia and lost his life. His life.

Christians should lament these dichotomies, not celebrate them.

Or to follow more closely the words of Jesus, we should be about the business of putting away our swords, not picking them up.