The religious roots of Striketober 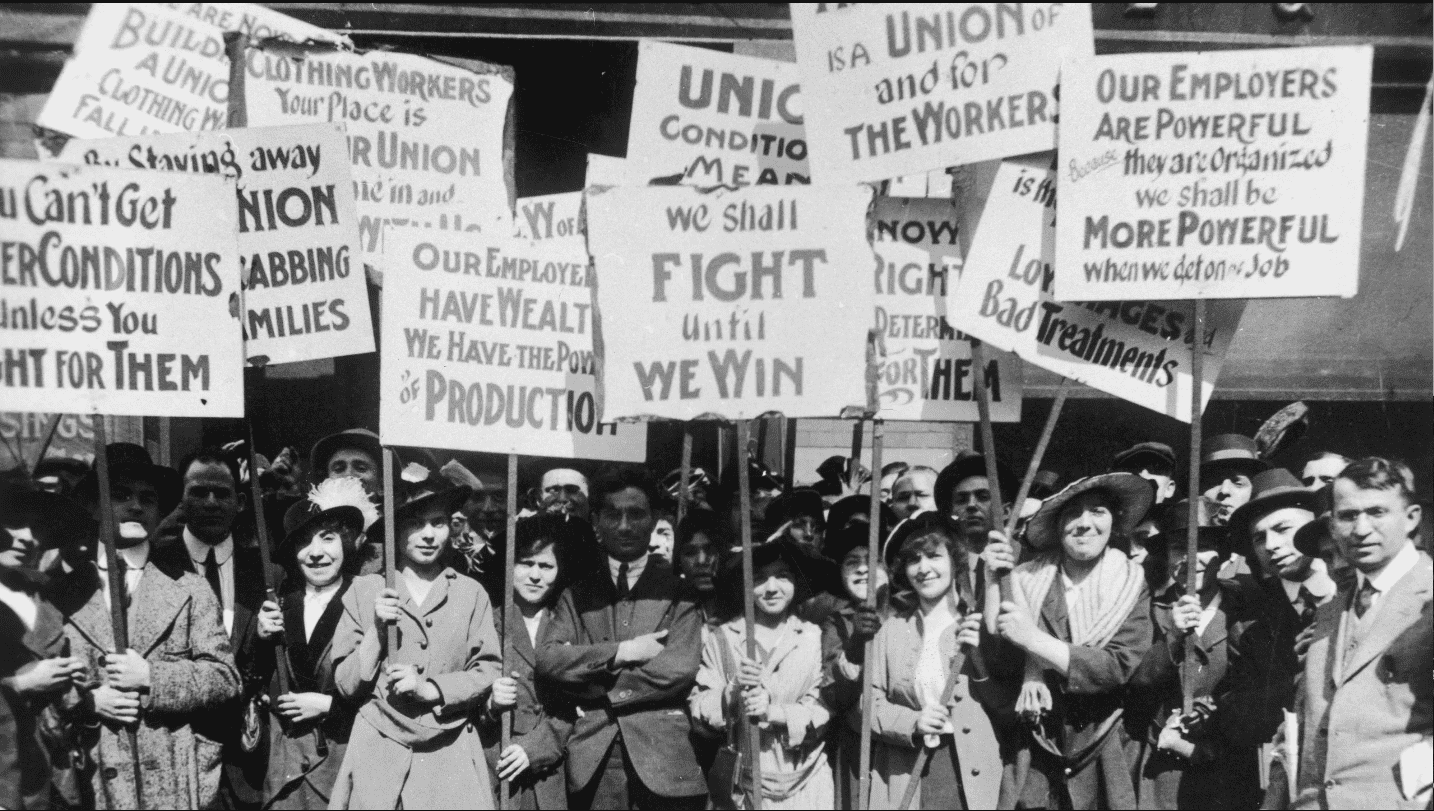 Though it is getting little coverage outside of what is being inaccurately described as a “worker shortage,” the United States is in the middle of a quiet but growing reactivated labor movement.

Nabisco, Kellogg and John Deere have had prolonged worker strikes this fall. The United Mine Workers of America picketed earlier this year, and the Service Employees International Union marched in September. All told, there have been 185 labor strikes across 255 locations in the United States this year, leading some to label the fall of 2021 as “Striketober”.

In addition to continuing fallout from COVID production drops, the strikes are significant factors in many of the supply chain issues that have been discussed in national media in recent weeks. Why the strikes are not getting more attention is a matter of some curiosity — is it because the labor movement’s clout is increasingly marginalized, or is it because support for organized labor is on the rise?

In recent years, organized labor has largely become the domain of the left as conservative politics and conservative evangelical religion have become more and more intertwined, but that hasn’t always been the case. In the past, conservative religious institutions also backed the movement.

During the 19th and early 20th century labor movement, the Catholic Church — an institution known more for being reactionary than revolutionary — backed the formation of unions with the papal encyclical Rerum Novarum, during which Pope Leo XIII said that “it were greatly to be desired that they should become more numerous and more efficient.”

“Wages, as we are told, are regulated by free consent,” Leo wrote, “nevertheless, there underlies a dictate of natural justice more imperious and ancient than any bargain between man and man, namely, that wages ought not to be insufficient to support a frugal and well-behaved wage-earner. If through necessity or fear of a worse evil the workman accept harder conditions because an employer or contractor will afford him no better, he is made the victim of force and injustice.”

The use of unions is a protection against such injustice.

Looking to the east, in pre-Soviet Russia, the then-Patriarch of Moscow, Tikhon, addressed a local strike in a letter to a newspaper in 1902:

“The strike is still going on, our parishioners endure everything and become poorer; and it is not known when there will be an end to this onerous situation. But the saddest part is that even if an accord is reached (between the group of capitalists and the representatives of the workers), still it will bring only temporary calm and satisfaction.

Without a doubt, in the future, life will become more expensive, supplies and goods will increase in price, while wages will remain the same and therefore will be insufficient. This means, with the way things are around here, it will again become necessary to resort to a strike, and suffer again, and continue to live in poverty.

In these circumstances it is necessary to come to help the needy. Why not establish a special fund specifically for the purpose of helping during strikes?—since many of our parishioners now work in factories, and, not taking part in the present strike have a certain income. It would be sinful not to remember the needy and the suffering during the well-to-do times! Likewise, when the needy attain what they want, why should they not set up at least a small reserve for a ‘rainy day’ in the future?”

The Oxford Movement’s second generation likewise spawned interest in protecting the rights of laborers. As John Wirenius notes in the Journal of Catholic Legal Studies, Oxfordite Charles Gore — a churchman who has a feast day on the Church of England’s Calendar — was deeply concerned with the rights of workers and highly skeptical of monied interests. When he hosted a panel discussion on “The Church and Social and Industrial Problems”,

Gore invited G.K. Chesterton and a local union leader listed only as “Mr. A. Moore” onto the panel with him, and described in his remarks the “great revolt embodied in the Labour Movement” as “against the hideous injustice in principle as well as in practice of our whole commercial and industrial system. It is declared to violate humanity-the root principle of brotherhood, that is the principle of the equal God-given right of every human being born into the world to have a fair chance to make the best of himself or herself. The cry of this revolt is, ‘Not charity, but justice.’ Now this revolt. . . I believe to be absolutely justified and rooted in the principles of Christ.”

Discussions of the early labor movement were not strictly the purview of the apostolic churches. Heath W. Carter, the author of “Union Made: Working People and the Rise of Social Christianity in Chicago” relates this story about the response of workers to an evangelical who tried to shut them down with a spiritual admonition:

Christian laborers looked not only to the person of Christ but also to his teachings. When in the mid-1880s Chicago merchant John Farwell — one of Dwight Moody’s leading patrons — challenged the Knights of Labor to become “students of the four gospels and true followers of Christ” he stirred up a theological hornet’s nest. One retort read, “As a student of the four gospels, I have learned that there is a fair prospect for the Knights of Labor to reach the kingdom of heaven, but I can hardly see any chance at all for Mr. Farwell. It would be easier for a camel to go through the eye of a needle than for him to get there.”

The writer went on, “Mr. Farwell, of course, does not believe the New Testament, and the evidence of his infidelity is this, that although he is a richer man than any man that lived in Judea at the time of Christ, yet he is trying to be richer still. He is working very hard and very successfully to make himself ineligible of a place in the kingdom.”

Farwell’s interlocutors weren’t alone or new in the evangelical movement in advocating for labor rights. One of America’s first mill strikes, at a textile facility in Taunton, Mass., was done under the leadership of a Freewill Baptist preacher in 1829.

Carter notes that early unionists loved to quote James 5: “Now listen, you rich people, weep and wail because of the misery that is coming on you.  Your wealth has rotted, and moths have eaten your clothes.  Your gold and silver are corroded. Their corrosion will testify against you and eat your flesh like fire. You have hoarded wealth in the last days.  Look! The wages you failed to pay the workers who mowed your fields are crying out against you. The cries of the harvesters have reached the ears of the Lord Almighty. You have lived on earth in luxury and self-indulgence. You have fattened yourselves in the day of slaughter.”

These verses may be a key to understanding what is happening today, as some commentators have noted that the so-called worker’s shortage is actually best viewed as a capital strike — that is, employers are holding out on paying better wages in the hope that workers will become so desperate that they will take a lower paying job than what they need to live comfortably.

Employees who have been deemed “essential” are likewise working to get employers who have not fairly compensated them in light of pandemic conditions to live up to that claim.

The post-traumatic shock of a deadly pandemic that took an inordinate toll on workers who didn’t have the privilege of earning a living remotely, and their families, has also been linked to the recent employee activism.
“I think workers have reached a tipping point,” Tim Schlittner, the communications director of the AFL-CIO, told ABC News. “For too long they’ve been called essential, but treated as expendable, and workers have decided that enough is enough.”

“They want a fair return on their work and they’re willing to take the courageous act of a strike to win a better deal and a better life,” he added.

The AFL-CIO’s Schlittner said the pandemic also exposed some deep “imbalances of power in the economy.”
“The pandemic has made clear what’s important and what’s not, and workers are looking at work in a new way, and demanding more of a return on their labor, and demanding things like basic respect, dignity and safety on the job,” Schlittner told ABC News. “The pandemic has put on display for everyone to see how important workers are to this country, and you can’t call workers essential for 18 months and then treat them like crap when they all come back on the job.”