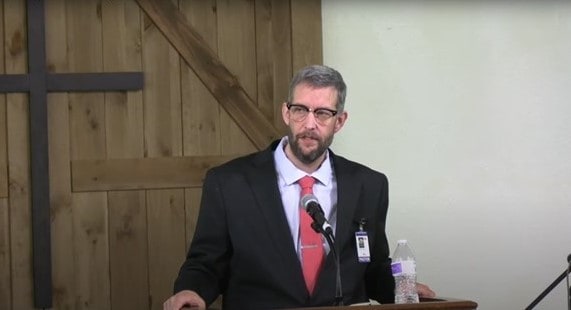 Social media critic and pastor Jordan Daniel “JD” Hall has been removed from ministry by Fellowship Baptist Church in Sidney, Montana, due to “serious sin” allegations.

Best known for his polemics website Pulpit & Pen and, more recently, Protestia, where he launched criticism directed at Christian leaders, Hall has also been terminated from those ministries. The removal from his roles followed a little more than a month after he was taken into custody on DUI and weapons charges.

While church leaders have not yet made a public statement on his removal, his resignation was announced on June 26.

“Earlier this week, the team at Protestia received allegations of serious sin committed by our brother JD Hall. After correspondence with leadership at Fellowship Baptist Church, we learned that JD was determined by the church to have disqualified himself from pastoral ministry, had resigned from the pastorate, and submitted himself to a process of church discipline,” Protestia reported. “Due to JD’s removal from pastoral ministry, we likewise have removed him from ministry with Protestia.”

Protestia noted that while it appears Fellowship Baptist Church considers the allegations against Hall “credible, we are unable to determine their truth with certainty and therefore cannot speak to all of the specifics of the accusations lest we be guilty of gossip.”

However, the issue of Hall’s guilt appears to be far from clear. Despite his poor performance on a field sobriety test, no alcohol was found in Hall’s system after administering a blood test.

“Pastor Hall tenured his resignation to the church Thursday after being charged with DUI on Wednesday evening. There was no alcohol in his system, and he blew 0.0 on the administered breathalyzer. However, police insisted Pastor Hall failed the administered field sobriety test,” Fellowship Baptist Church said in the statement.

One possible explanation is related to a documented vitamin D deficiency, which could account for the symptoms displayed by the pastor.

“Pastor Hall has suffered from documented vitamin D deficiency, which can result in poor coordination, slurred speech, word displacement, etc. This medical issue has been discussed openly for some time and has been the subject of our church’s prayers. Nonetheless, Pastor Hall felt responsibility for bringing the stain of rumor upon the church and thus offered his resignation.”

Protestia said in its statement that since it relies on local churches to exercise the biblical process of church discipline in the lives of its writers and team, the decision by Fellowship Baptist Church to disqualify Hall from ministry means he is no longer qualified to work with the website.

Religion News Service brought to light that the church later released a statement concerning Hall’s alleged abuse of prescription drugs.
“Fellowship issued a statement saying that after an incident in early June, other church leaders became aware that Hall had allegedly been abusing the prescription drug Xanax.

“As a result, Pastor Hall tendered his resignation from the pastorate shortly thereafter on June 8th, under the assumption that he had become disqualified from eldership as detailed in 1 Timothy 3,” the church said in a statement.

Church leaders also defended their previous decision to back Hall after his arrest, saying they believed their former pastor’s claim that a vitamin deficiency was to blame.