Christian Nationalism and the tricky task of Biblical interpretation 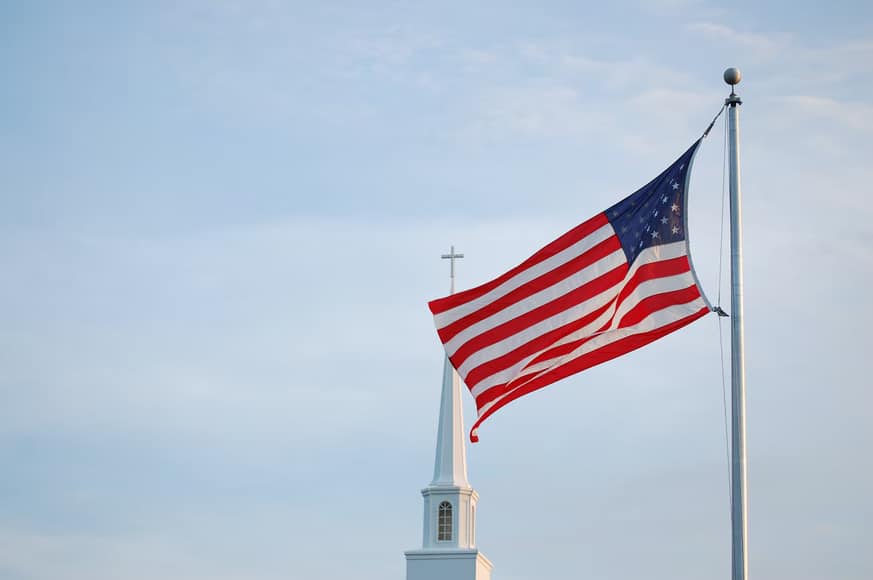 I was introduced to Christian nationalism in subtle ways throughout my early years. I never gave a second thought to the overt display of the American flag alongside the Christian flag during Vacation Bible School or the rote recitation of pledges until years later. We added to those pledges a curious pledge of allegiance to the Bible, a practice that raises all kinds of complex theological questions about where Christian allegiance should find its center. These milder forms of Christian nationalism were performed with complete confidence that commitment to Christ could be lived in conformity with observance of American democratic norms. However, I met more strident forms of Christian nationalism as a college student. One of my favorite professors was attacked by local partisans after he simply raised points of disagreement with a David Barton presentation on Christian Americanism. His colleagues and the college defended his academic freedom at the time. Fifteen years later, while I was teaching at the same institution, letters submitted to the administration by myself and a colleague, both with doctorates, outlining reasons why the college should not invite Barton as a guest speaker were viewed with suspicion. They were entrusted by administrators to a student worker majoring in music who did not yet have his B.A. to be vetted for “factual accuracy.” Barton was still invited.

Concerns are mounting about how much this darkest form of Christian nationalism is growing and being normalized. Ideas that occupied the margins of Christian subcultures and were spoken in whispers only ten or fifteen years ago are now being proclaimed in the open and embraced as badges of honor. The quiet part is not only said out loud, it’s being embraced as the ideal. Journalist Molly Olmstead wrote an excellent article for Slate titled “Christian Nationalism Used to be Taboo. Now It’s all the Rage.” Olmstead included a quote from Samuel Perry, who noted that, “Christian nationalism is simultaneously becoming more stigmatized in the mainstream. And yet the people that do affirm it are becoming more radicalized, more militant, more really open about it. Like, ‘OK, if this is who we are, we just need to embrace this thing.’”

Religion scholar Daniel Miller and Historian Sara Moslener addressed the normalizing of Christian nationalism and the argument that Christian nationalism is not “real” Christianity on a recent episode of the Straight White American Jesus podcast. Moslener expressed concern about arguments labeling Christian nationalism as “fake Christianity” because those arguments ignore the seeds present within the larger religious tradition that Christian nationalists draw on to support their worldview. While forces like nationalism, racism, and authoritarianism are not necessarily inherent or organic extensions of Christian thought and practice, there are elements of the source material that can be mobilized to support racist, nationalist, and authoritarian actions if given a particular interpretive center. Moslener also made the helpful point that historians and scholars of religion walk a careful line when it comes to defining what constitutes “real” or “legitimate” observance within a particular religion. Those judgements are theological in nature rather than historical or academic.

These conversations taken together raise important questions about what the normalizing of Christian nationalism as an open political and religious movement means for American Christianity. While ultimate Christian allegiance is to the person and redemptive work of Christ, most Christian traditions also teach that the most trustworthy medium for understanding the person and work of Christ is the Bible. They don’t necessarily agree on how or to what degree, nor do they all agree on the content of the canonical scriptures themselves. Roman Catholic, Greek Orthodox, and Protestant traditions have different canons, but the Bible looms as the ultimate authoritative source for faith and practice with magisterial tradition carrying a strong weight as well in Roman Catholicism and more confessional Protestant groups.

The Bible is a complicated book and far too often it seems that those who least appreciate its complexity are those who claim to revere it the most. Biblical interpretation turns on where the interpreter locates the center of the Bible’s message and how they rank the relative importance of the biblical texts. Many Christians would immediately respond that they don’t rank the texts in any order of importance because all of the Bible is equally inspired. Even the most surface-level exploration of people’s actual application of the Bible demonstrates the fallacy of such claims. Few Christians would elevate prohibitions against eating shellfish in Leviticus over Paul’s advice to the Romans about food sacrificed to idols. Everyone prioritizes and orders the texts according to their sense of the Bible’s interpretive centers.

The most basic interpretive center in Christianity lies in prioritizing the New Testament over the Old, or at least interpreting the Old Testament in light of the New. This center sets Christianity apart from Judaism, going so far as to make a distinction between two separate religious movements. Christian traditions that emphasize the Great Commandment as their interpretive center tend to lean toward social justice, appreciate the Sermon on the Mount, and teach the importance of the Old Testament prophets. Traditions that center on the Great Commission pursue evangelism and missions, often being acutely aware of extending their reach to those outside the fold. Those who emphasize Pauline standards for proper Christian community and see the community as intentionally called often pursue spiritual and intellectual sanctification along with an extension of cultural influence. None of these tendencies are always followed with rock-solid consistency. Christian traditions can be as inconsistent and lacking in self-awareness as the imperfect humans who form and follow them. But as a careful generalization, interpretive centering exerts a strong influence on the character of a Christian tradition and those who follow it.

One can say that the Jericho Marchers, for example, who descended on the Capitol in December 2020 marched out of step with the mainstream of Christianity. The claim probably carries an element of truth, though maybe less so in 2022 than in 2020. What critics can’t say is that the Jericho Marchers find no precedent in Christian source materials such as the Bible and Christian history for their actions. The source materials appear in the very name of the movement. The ultra-literal application of Joshua 1-6 in the form of blowing shophars and marching around the city seven times could and should be labeled extreme. Interpreters could argue that Joshua’s actions were performed at a particular moment for a particular historical circumstance and that they have no binding application for contemporary believers. Historians and religion scholars can point to how the Jericho March’s interpretation is driven by a Neo-Charismatic/Pentecostal tradition that emphasizes magical thinking over sober exegesis. What you can’t argue is that it’s simply “unbiblical.” The march’s presence in the text can’t be denied.

For too long, Christians have defended their positions with the simple assertion that this or that is “biblical.” Conversations descend into a flurry of dueling proof texts as different sides mobilize the texts that best support their position, glossing over or even ignoring texts that muddy the waters. Shades of this simplistic approach to the Bible also appear in attempts by evangelicals to create Bible classes in public schools, a ploy that only makes sense combined with their belief that the text inherently speaks truth to any reader. Just get the text in their hands and kids will discern the “proper” interpretation of the text, they believe. If they were successful at getting Bible as Literature courses approved for public schools, conservatives would face students being exposed to questions and complexities of interpretation they are not prepared to address. Deeper engagement with the Bible leads to more questions rather than less.

Christian nationalism’s mainstreaming raises the need for Christians to develop deeper answers to why the Bible tells them so that go beyond merely citing chapter and verse. Proof texts will not cut it because it’s all there depending on how one reads the text. Religious violence and spiritual warfare are not confined to the Old Testament. One could argue that they reach their height in Revelation. “Chosen nation” theologies may be more muted in the New Testament, but they persist. Xenophobia appears in Ezra and could be pulled from Jesus’ reference to the Jews as the “children” and Gentiles as the “dogs.” A fascinating debate is unfolding in regard to the “biblical” witness on women’s roles in the church. Christian scholars like Kristin Kobes Du Mez and Beth Allison Barr are contending that the Bible proclaims a liberating message for women in the church. Members of groups like the Council for Biblical Manhood and Womanhood and Desiring God insist that the Bible advances a particular role for women in the family and church that rises to confessional status. Religion scholar Jill Hicks-Keeton takes issue with evangelical feminists’ interpretation of the Bible, acknowledging that the texts do carry a misogyny characteristic of their historical context, while also agreeing with them that those misogynistic ideas should be discarded as relics of an unenlightened past. Establishing which of these views is more “biblical” requires more than proof texting. It requires reading the Bible carefully alongside other helpful resources and in light of universal human experiences.

Historian Mark Noll presented an interesting summary of biblical texts used by both abolitionists and pro-slavery advocates to make their cases prior to the Civil War in The Civil War as Theological Crisis. One of his most sobering arguments underscores how pro-slavery advocates had more raw proof texts on their side of the debate. Abolitionists relied on the spirit of the text rather than the letter, taking the debate back to larger declarations of human worth that they believed should provide the interpretive center against which the rest of the text should be read. Christian nationalism could be a negative movement that prompts a positive reaction if it forces moderate and progressive Christians, and maybe conservatives as well, to think more expansively and critically about what is means to define ideas or actions as “biblical.”