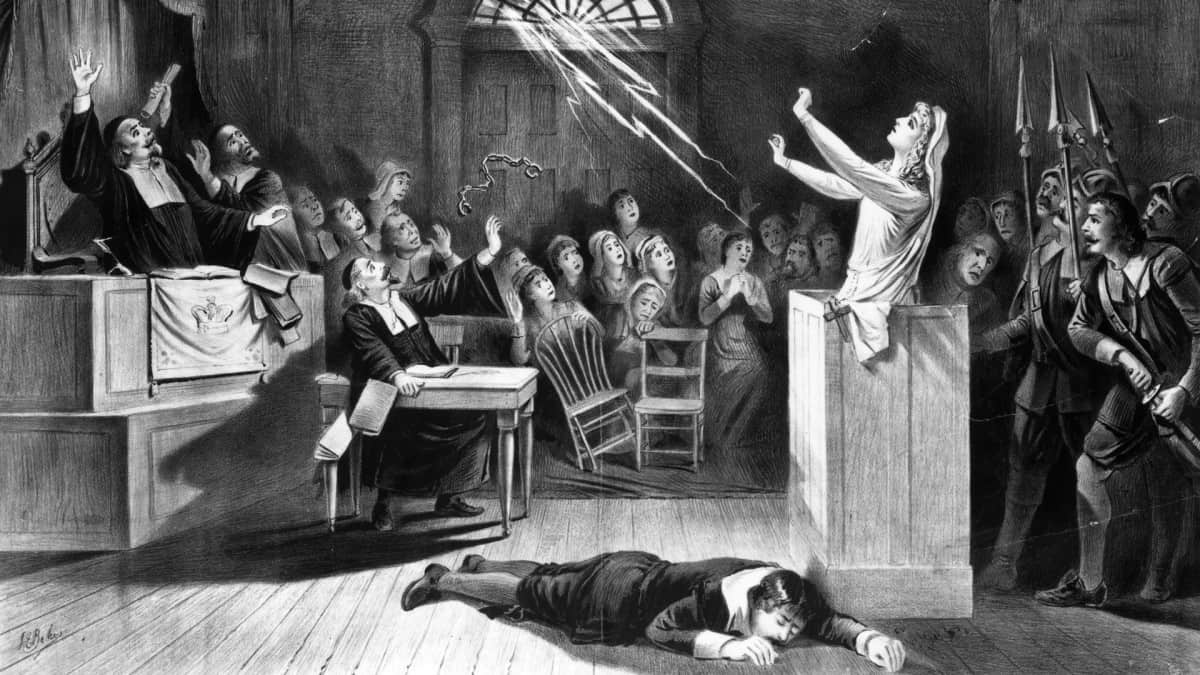 Most Americans have heard of the infamous Salem Witch Trials of 1692 which condemned 20 people to death, 19 by hanging and one pressed to death by rocks. Fewer know that the first person executed for witchcraft in colonial America was hanged at New Haven, Connecticut in 1647. Alise Young lived in Windsor and was in her early thirties when she was executed. The only surviving references came from Massachusetts Bay Colony Governor John Winthrop Sr., who simply identified the accused as “one of Windsor,” and a note in Windsor town clerk Matthew Grant’s diary entry for May 26, 1647, where he names Alise as a condemned witch executed on that day. Alise’s name might have been lost to history except for Grant’s diary entry.

Connecticut colonists endured sporadic witch trials from 1647 to 1697. Fewer people died overall and over a long period of time in Connecticut, 11 to 15 in Connecticut over decades compared to the 20 in roughly a year at Salem, but many more people were accused and suffered harrowing trials, imprisonment, and mistreatment by their neighbors. Some had to give up their homes and relocate to escape execution. The full weight of Connecticut’s terrifying witch hunts continues to surface as historians and activists probe the scattered records that survived in university libraries and public archives. The Connecticut trials featured both the first person to be executed for the crime in the American colonies and Mary Johnson, the first person to sign a confession admitting to witchcraft in 1648. Beth Caruso, a historian and writer of historical fiction, explored Alise Young’s story in One of Windsor: The Untold Story of America’s First Witch Hanging and helped secure Young’s exoneration by a unanimous vote of the Windsor Town Council in 2017. The Connecticut Witch Trials Exoneration Project has organized descendants of the accused, historians, and activists to pursue exoneration for the victims at the state level through education, lobbying, and an online petition. As their work continues, the number of known cases has risen from 34 to the 40s. Members Sarah Jack and Josh Hutchinson are starting a podcast called Thou Shalt Not Suffer which will extend the educational mission of the group by exploring the history of witch trials and contemporary connections to them.

Amidst the horrors of early modern witch hunts, individuals sometimes arose who added voices of reason to the proceedings. These voices were often crying in the wilderness, unable to do more than point their fellow citizens to a better way without directly guiding public policy. John Winthrop, Jr. achieved social prominence and political influence in early Connecticut and used his platform to check the severity of sentences levied against accused witches. Winthrop served a term as Connecticut governor from 1657-58 and was elected in 1659 to a series of consecutive one-year terms that lasted until his death in 1676.

Winthrop was well placed to gain the respect of his fellow colonists through both pedigree and personal initiative. His father was John Winthrop, Sr. who helped found the Massachusetts Bay Colony in 1629 and served as its governor. He’d studied at Trinity University in Dublin and pursued legal training at the Inner Temple in London. Following his family to Massachusetts Bay, Winthrop Jr. moved into the Connecticut territory. He built an ironworks, a grist mill, and founded the town of New London in 1646. His commercial success and competent governorship of lands owned by Lords Say and Brooke in the late 1630s laid a foundation for his future successes.

Winthrop’s philosophical and religious outlook was key to his entrepreneurial, social, and political pursuits. He devoted himself to the pursuit of alchemical studies, which included experimentation with metals and harnessing natural sources for producing medicines. Winthrop was connected to a network of European scientists and philosophers who believed in cultivating occult or hidden knowledge of the natural world to benefit humanity. Historian Walter Woodward argues convincingly in Prospero’s America: John Winthrop, Jr., Alchemy, and the Creation of New England Culture, 1606-1676 that Winthrop’s alchemical interest coexisted easily with his Puritan ideals. Alchemists of the early modern period believed that natural “magic” could be legitimately used to serve divine purposes. Diabolical magic could occur when Satan guided malevolent practitioners to manipulate natural forces for evil, but only God could create completely supernatural miracles because he alone was free from constraint by his own natural laws. Winthrop was positioned perfectly to challenge the methods of witch hunt prosecutors because fellow Puritans viewed him as a person with rare expertise in understanding magical forces and Winthrop himself believed that manipulating natural forces required great skill. Alchemists were inclined to dismiss most witchcraft accusations because they believed most people were unable to manipulate natural forces with the skill required to cause diabolical harm. They also proved successful at demonstrating that the spectral visions and physical manifestations used to support accusations of witchcraft could easily be produced through natural forces or personal delusions.

Winthrop carried these views into his early consultations on a witchcraft case in New Haven concerning Elizabeth Godman from 1653-1655. She was accused of afflicting multiple women with physical maladies. Winthrop demonstrated that the maladies could be caused by other natural means, casting enough doubt to save her from execution. He was pulled into cases in Hartford once he became governor of the Connecticut colony in 1657. Winthrop established a precedent of acknowledging the reality of phenomenon witnessed by accusers to appease them while using his command of alchemical processes to argue that the phenomenon were natural and free of diabolical influence. Accused witches were ambiguously treated, not fully exonerated but also not declared guilty of diabolical witchcraft.

This careful balance held until Winthrop traveled to London in 1662 to secure a charter for the Connecticut colony. The charter he negotiated combined Connecticut and New Haven into a single entity, paving the way for the creation of the future state of Connecticut. The terms of the charter gave him extensive judicial and political authority as governor that he used later to stem witch hunts. While Winthrop was gone, the deadly Hartford witch panic brought new accusations and the execution of four people. Aggressive ministers pushed allegations of diabolical magic and secured an accusation from Rebecca Greensmith that named seven other people. Several people were forced to flee the colony to escape execution, and Greensmith, her husband Nathanial, Mary Sanford, and Mary Barnes were hanged. Winthrop returned in time to advocate on behalf of Elizabeth Seager, saving her from joining the four executed victims. He was grieved at what had occurred in his absence and resolved to enshrine his more tolerant approach.

The greatest test of Winthrop’s resolve came in the late 1660s when Katherine Harrison was accused of witchcraft. Harrison had risen from humble roots to marry a prosperous farmer. Her husband left a substantial inheritance to Harrison and her children when he died, making her one of the wealthiest people in Wethersfield. Resentment of Harrison’s position as a prominent woman and rumors of her indulgence in fortune telling cultivated accusations of witchcraft and vandalism. Harrison’s property and livestock were damaged. She went on trial for witchcraft in 1669. Winthrop and Gershom Bulkeley, a local minister and fellow alchemist, faced challenges to their authority and calls to link diabolical magic and natural alchemical magic. Bulkeley and Winthrop walked a thin line as they responded to a petition calling for opposing representatives to take over Harrison’s case. They crafted a careful definition of reliable evidence and proper procedures calculated to save Harrison while also protecting their own alchemical interests from censure. Bulkeley released a treatise that standardized a requirement for more than one witness to attend a supernatural event for it to be accepted as valid, questioned the reliability of spectral evidence because Satan could manifest in the form of the accused, and narrowed the scope of acts that could be classified as diabolical magic. In addition to securing Harrison’s release under condition of exile, Winthrop and Bulkeley’s strategy also reduced witch trails in Connecticut and ended executions for the crime.

John Winthrop, Jr.’s role in addressing the problem of witch hunts in Connecticut is more than a fascinating story. It also illustrates the ironic way that people with interests that we might call occult or pseudo-scientific today were instrumental in helping reduce instances of witchcraft prosecutions. Enlightenment skepticism played an important and definite role in ending the witch trails in colonial America and Europe. While it’s appropriate to recognize the important role of Enlightenment thinkers, a full picture of those who challenged witch hunts must include people like Winthrop who used theological and alchemical arguments to combat witch hysteria. Arguments from the inside that are theologically informed and culturally aware can serve to correct the baser impulses that sometimes consume Christian communities.