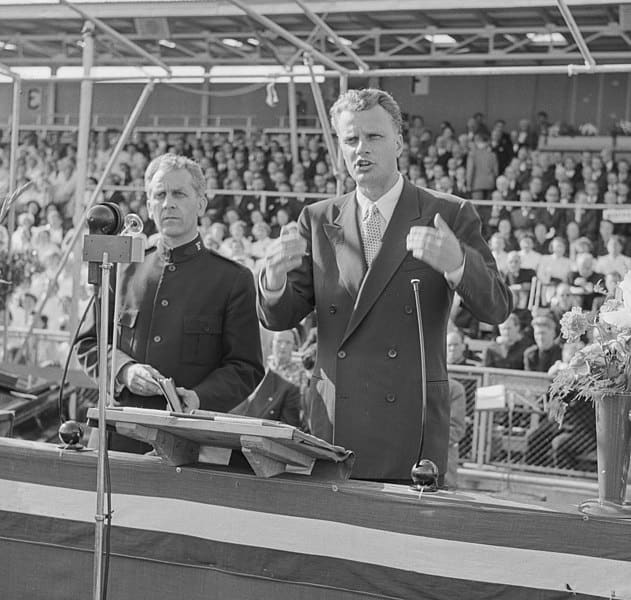 One of my pastors offered a humorous shorthand for dealing with the complexities of defining American evangelicalism when I was a teenager. He repeated the joke, popular at the time, that an evangelical was anyone who liked Billy Graham. The corollaries to this statement helped sort “liberals” and “fundamentalists” from “sensible” folk as well. Anyone who thought Billy Graham was a fundamentalist must be a liberal. Those who thought Billy Graham was a liberal were fundamentalists. This notion of a Graham-centric universe prompts a chuckle or two while also testifying to the reality of Graham’s massive spiritual and cultural influence. Most Christians of all stripes would be quick to say that Graham does not represent the center of their universe. Yet we are fooling ourselves if we do not recognize the reality that the American religious landscape in which we operate was forever transformed, for better and sometimes for worse, by the influence of Billy Graham and the Neo-Evangelical movements that orbited loosely around him. The recent PBS documentary Billy Graham: Prayer, Politics, and Power took a fresh look at the evangelist and his legacy, raising again important questions about his continuing influence.

Billy Graham stands forever as an elder statesman of American religion in the minds of many Americans because we only knew him in his later years. The young evangelist first captivated the nation in the 1940s as an energetic preacher affiliated with Youth for Christ. His rapid-fire delivery, so different from the more staid style of his later ministry, earned him the nickname “God’s Gatling Gun.” Youth for Christ’s slogan was, “Anchored to the Rock and Geared to the Times.” This mantra defined well the mission of Graham and his associates who wanted to urge a wary fundamentalist movement to reengage with American culture. Graham’s theology remained basic and rooted in the simple message of salvation through Jesus Christ throughout his long career. Considered a paragon of conservatism in later years, Graham was reviled by fundamentalist leaders such as Bob Jones, Sr. for his willingness to work with a wide array of Protestants and Roman Catholics to promote the gospel of grace. His 1948 Los Angeles crusade prompted thousands to make public decisions for Christ and with help from newspaper publisher William Randolph Hearst, brought Graham national attention. Graham created the Billy Graham Evangelistic Association in 1950 and launched a series of crusades throughout the decade that included important stops in London (1955) and New York City (1957). The Netflix series The Crown dramatized Graham’s 1955 London visit and his interactions with Queen Elizabeth II in the sixth episode of the second season. The episode deserves a viewing from anyone interested in Graham’s interactions with people in power.

Graham’s decision to co-found Christianity Today with theologian Carl F. H. Henry in 1956 provided a loose intellectual center for the emerging Neo-Evangelical movement. A diverse array of media and parachurch ministries arose over the next few decades that owed much to organizational schemes pioneered by Graham. Beginning with an awkward visit to Harry Truman, Graham moved into the orbit of political influence by forging relationships with every president from Truman to the present. His crusade ministry reached around the world. By the time I was growing up in the 1980s, Graham enjoyed the informal status of being “America’s Pastor” and retained almost universal respect in American culture. In an age when televangelists made Sinclair Lewis’ Elmer Gantry look like a saint with their scandalous behavior, Graham maintained a ministry free of any taint of sexual or financial scandal.

Billy Graham presents an interesting challenge for anyone, including his fellow Christians, assessing his legacy. The simple gospel message of sin and redemption through Christ that Graham proclaimed in his sermons and published in his 1953 book Peace with God stayed close to basic theological principles on which Christians across the spectrum could agree. Graham seldom ventured into complex theology. Those times when he did were memorable for their awkwardness. Like most revivalists, Graham chose the big tent and the lowest common denominator in a bid to reach the largest audience possible with the gospel. These choices made it easy to work with people across the theological spectrum. However, they did exact a price. Graham’s influence propagated and reinvigorated a nineteenth-century tradition of revivalism that was highly effective at bringing people into the kingdom while not necessarily equipping them well for the task of living that kingdom life in the world. Graham’s adherence to a strict sacred/secular divide and promotion of dispensationalist end-times views ran counter to the comprehensive world and life view promoted by some Reformed, Pietist, and Roman Catholic Christian traditions. Those traditions benefited in recent decades from some evangelicals who experienced salvation in the evangelical world influenced by Graham but turned to more systematic and integral traditions as they matured in their faith. Reformed thinkers such as Arthur Holmes, George Marsden, and Mark Noll were integral in bringing the comprehensive breadth of Reformed thought into conversation with evangelicalism to produce a small but significant renaissance of evangelical intellectualism beginning in the seventies.

Billy Graham gained for American evangelicalism tremendous growth and a strong presence in American popular culture. He also modeled the compromise of prophetic Christianity in his fawning support for Richard Nixon long after most of the nation accepted the evidence of Nixon’s corruption. Graham maintained personal sexual integrity and promoted the American family. He neglected his own family while on the road to the extent that Ruth Graham sometimes had to introduce him to his youngest children when he returned home. Graham emphasized the message that Jesus loves us all at every opportunity. He took hesitant and inconsistent steps to promote civil rights for African Americans.

What should Christians make of Billy Graham? No more or less than what Billy Graham made of himself. In the midst of all the accolades he received, Graham insisted throughout his life that he was nothing more than another sinner saved by grace and used beyond his wildest dreams by a God whose purposes he could only begin to fathom. Both the best and some of the worst tendencies of American evangelicalism owe something to his influence. The diversity of the Christian traditions that have benefitted from his influence either directly or indirectly both testifies to the breadth of his influence and guarantees that no one figure will ever again enjoy the universal acclaim that Graham received at his peak. All Christians should celebrate and emulate the good examples set by Graham. We should learn the lessons of his mistakes and excesses so that the negative aspects of his career might be redeemed by God’s grace in the positive lessons they teach us. Above all, we should join other Christians around the world in giving thanks for his life, offering prayers for his family, and embracing the peace that we can have with his God through Christ.