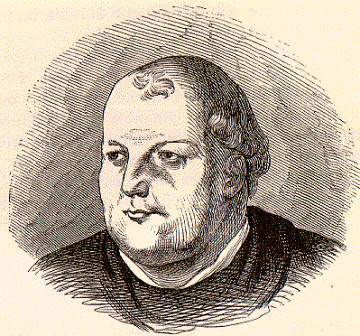 Johann Von Staupitz had no idea what he was getting into when he first met Martin Luther in 1506.  Luther had recently left his legal studies at the University of Erfurt to embrace a life of monastic rigor in the Augustinian monastery.  He brought with him a deepening spiritual crisis that would pose a challenge for Staupitz in his role as mentor and personal confessor.  Staupitz had been elected Vicar General of the German Augustinians in 1503 and earned a doctorate in theology in 1500.  He had the requisite spiritual and theological qualifications to deal with complex spiritual struggles.  And, yet, his new charge would tax his considerable abilities to the limit.

Luther felt compelled to share his every sin when it came to the confessional.  The comprehensive breadth of Luther’s confessions was reported to rival that of his order’s famous namesake, St. Augustine of Hippo.  Luther reported years later that he had once kept Staupitz in the confessional for six hours as he labored to ease his troubled conscience.  Staupitz joked that Luther confessed for hours on end without confessing “anything interesting.” Things got very interesting when Staupitz challenged Luther to just let go of his guilt and love God.  “Love God!” the future Reformer responded, “I hate God!”

Staupitz’s response to this bit of blasphemy had the potential to make a tremendous difference in Luther’s life.  He could have rejected his young charge.  Staupitz could have reprimanded him.  It would have been easy to abandon Luther to his struggles.  Would it not have been much simpler to explain the failure of this promising monk as a poor fit with the monastic life?  Staupitz knew that such an explanation would not suffice.  Luther showed every mark of superior progress in his work, devotional practice, and obedience to the order.  It was in fact because of his pursuit of excellence and spiritual purity that Luther was plagued by such inner turmoil.

Staupitz did not give up on Martin Luther.  He persisted in patient mentorship as Luther sought peace with God.  It was Staupitz who suggested that Luther be sent as an emissary to Rome.  This fateful trip, intended to ease Luther’s spiritual crisis, only intensified it as his eyes were opened for the first time to many of the ugly realities of sixteenth-century Catholicism.  Staupitz, serving as the first dean of the new University of Wittenberg in Saxony, summoned his young protégé to study and teach there in 1508.  The opportunity opened the door to Luther’s engagement with scripture.  Luther’s engagement with scripture and theology guided him to understand that salvation was based on the merits of Christ rather than the personal merit of sinful human beings.  Those insights would soon shake the world.

I often reflect on the patience of Johann von Staupitz as I mentor students in my classes at Dordt College.  There is always the difficult student.  You can find in every class that one student, or more, who kicks against the goads.  Sometimes they seem to do so just for the sake of doing it.  And there are always those students like Martin Luther who come with their hard questions.  They truly want to understand.  And in their quest for understanding, for truth, they push the envelope.  They question everything they have ever believed or known.  Like Johann von Staupitz, I am confronted with a choice.  Do I shrink from the intensity of their struggle and the difficulty of their questions?  Do I move close enough to offer a supporting shoulder on which to lean?  Do I let them continue to ask away, or do I ask them to confine their quest for knowledge to acceptably noncontroversial topics?

What might have happened if Martin Luther had been under the care of someone besides Johann von Staupitz?  What if it had been someone who chose to break his spirit further by insisting that his questions and doubts were proof positive that his heart was evil?  How many sincere and courageous questing hearts like Luther’s have been crushed by the words, “We are not allowed to address those feelings here?”  Consider the ministers and other Christian leaders alone who are hungry to have a Staupitz in their life.  So many Christians, including students at Christian colleges, are hiding their secret doubts and struggles behind a mask of normalcy–because anything less would just be unspiritual.

Johann von Staupitz is not the first name that comes to mind on Reformation Day.  And why would it?  Staupitz never supported Luther’s reformation, though he remained Luther’s friend and died as a faithful Augustinian Catholic in 1524.  He never intended his brilliant student to apply scriptural insights in the way Luther ultimately did.  On the surface, Staupitz does not seem to deserve a place in the celebration.  Yet the more responsibility I have for mentoring others, the more I reflect on the pivotal role of Johann von Staupitz in offering guidance to Martin Luther before he became the reformer of legend.  It is the image of Staupitz that encourages me to listen longer, to care more, to answer wisely, and to persist despite the outward appearance of limited progress.  We never know when a student, a colleague, a congregant, or a friend may carry seeds of greatness that are being forged in the intensity of their struggles.  It is not always immediately obvious that the student who struggles to put two words together has the makings of a gifted writer or that the seemingly aimless academic drifter has the potential to lead legions given the right direction.  All of us who mentor in any capacity should work to develop the heart, mind, and eyes of a Staupitz.  I suspect Martin Luther would agree.  Long after his name had become a household word throughout Europe, the seasoned Reformer remarked, “If it had not been for Dr. Staupitz, I should have sunk in hell.”