Exvangelical: Not a journey, but a day 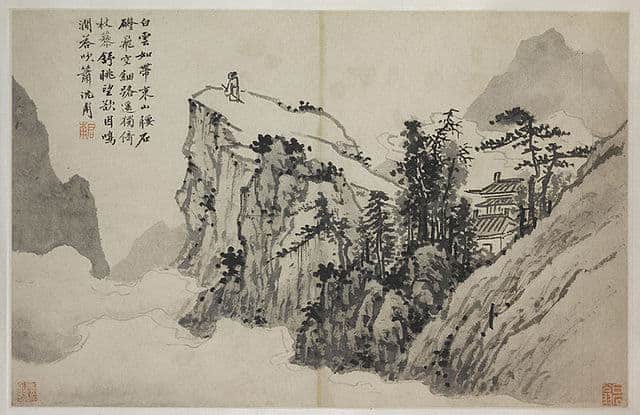 I’ve been in the world for thirty years,
And I must have traveled a million miles.
Walked by rivers where the green grass grows thick,
And entered the frontier where the red dust rises.
Purified potions in vain search for immortality,
Read books and perused the histories.
Today I return to Cold Mountain,
Pillow myself on the creek and wash out my ears.

Nearly 1,100 years ago, the poet Hanshan — known in the west as Cold Mountain — entered his fourth decade by occupying a cave in the Chinese mountains and occasionally venturing out to write poems on trees, rocks and even Taoist and Buddhist temple walls. Many of them survive and have been collected and translated several times, and the three traditional Chinese spiritual traditions — the aforementioned Taoism and Buddhism, as well as Confucianism — all make some effort to claim Hanshan as one of their own.

In some sense, that’s understandable. His wisdom is simple, straightforward, and presented in imagery that evokes a sense of transcendence without denying the natural world. But Hanshan also regularly pokes fun at Confuscian nobles, Buddhist asceticism and Taoist science; in Poem 302, for example, he implies that his time is better spent with his head underwater than pursuing alchemy, which at least one translator has humorously rendered, “I tried drugs in search of eternal life.”

I remember the first time I encountered Hanshan’s Poem 302, because it was a time in my life that felt very similar. Even though it was written in the ninth century, it takes on the trope of the spiritual journey and lays it bare. The seeker’s path, it says, just leaves your ears clogged.

Perhaps this seems like a roundabout way to discuss why I no longer identify as an Evangelical, but it makes sense in the cultural context of my youth. I came of age during the age of so-called Seeker Sensitivity, the idea that the incorporation of certain elements are more — or less — desirable within the Christian community to make it attractive to the so-called seekers, people of little, no or different faith who are nonetheless interested in something more.

One of the strongest totems of the moment was Rick Warren’s mega-blockbuster book, “The Purpose-Driven Life: What on Earth am I Here For?” Someone gave me a copy when I graduated high school, and though at the time I was already too pretentiously into theology to publicly take it seriously, I read it. For someone raised in the culture, the opening sentences did not register much, but I imagine that it was quite a shocker for those unfamiliar with the Evangelical worldview: “It’s not about you. The purpose of your life is far greater than your own personal fulfillment, your peace of mind, or even your happiness. It’s far greater than your family, your career, or even your wildest dreams and ambitions.”

As the book unfolds, Warren reveals his version of the Eightfold Path, which he presents as God’s five purposes for human life on earth. They are, respectively,  to love God; to be a part of God’s family; to become like God; to serve God; and to tell others about God. It is a kind of Calvinism-lite-lite, presented in easy-to-understand language that doesn’t condescend, and in interviews Warren called it an “anti-self help book.” In some ways, it was a corrective to individualism arising from the misapprehension of the idea of a personal relationship with Jesus.

Structured to be read over 40 days, and often in conjunction with a small group study, “The Purpose-Driven Life” was everywhere. Entire churches read it as part of the study, and yard signs popped up across neighborhoods advertising where you could go to find your purpose.

I heard more than one pastor and student leader refer to beginning the study as “starting a 40-day journey.” Everyone finishing it in earnest would result in sustained church-wide — perhaps citywide — revival. Seek ye first your purpose, and it shall be added unto you.

Study groups and individuals alike commenced, reading the bite-sized portions of the book every day. They sojourned for 40 days, spiritual siblings to the Israelites languishing in the desert for 40 years, and at the end they reached the destination. Purpose.

Things didn’t change, not really. People stayed more or less the same. Five years later, you couldn’t throw a rock in a thrift store without hitting a copy of “Purpose-Driven Life.” America still became what it is today.

My purpose here isn’t really to indict Rick Warren. Others can do that. After studies and classes and conferences and dozens of other tricks involving dozens of other personalities, all I felt was distracted. So I left; not on a journey, just out the door. Jesus stayed with me, just as he stayed inside.

Of course there is more to it — theology and politics and liturgical druthers all played a role — but ultimately it all came down to this: your faith, if you want to grow it, grows best in the boring, lived experiences of the day-to-day. Seeing the sights, reading the books, even trying new spiritual highs, aren’t going to bring you immortality. It’s going to come morning by morning, living in the moment of faith right where you are.

I couldn’t do that in an Evangelical church. For those who can, good for you and may God bless your effort. I have found a Christian space where I am happy.

And I feel like, for the time, my ears are clean.