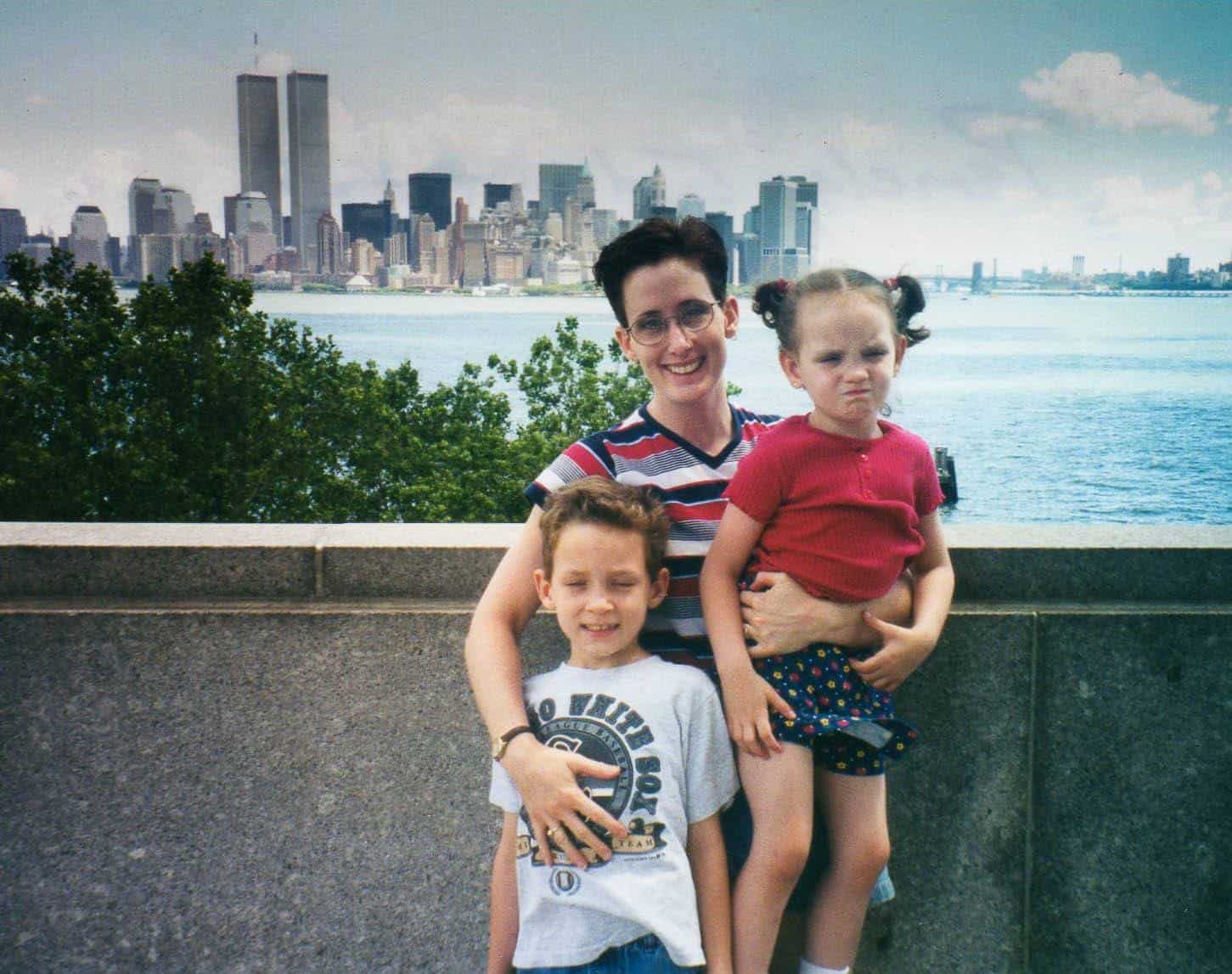 **This is a blog post that I wrote on an old blog site which I no longer maintain. I didn’t want to lose this record and decided to copy it here.**

A question that is often asked around this time of year: Where were you on “9/11”?

September 2001 began as a hopeful month for our family of 4. We had spent the summer trying to determine what our next steps were as my husband, Rondall,  had just graduated with his BFA. The question now was, should he pursue a law degree (he’d scored very well on the LSAT), or should he pursue his MFA. We had been living for 9 months with our friend, Karen,  in West Hempstead, NY just outside of NYC while we made our decisions and plans. That fateful month my husband began his first semester of graduate school at Pratt Institute in Brooklyn, NY. On September 10th we put a deposit down on an apartment that would settle us back into Brooklyn. We were really looking forward to being back in the city and closer to Rondall’s school. Though we were living just a short walk away from the nearest Long Island Railroad stop it took my husband about one and a half hours one-way to make the 20 mile trip to school via several trains and ending in a short walk. That meant he had to leave the house quite early to make it to his morning classes on time.

On the morning of September 11th, 2001 my husband had gone about his routine and left around 7AM and was not due to return until the 7:30PM train.

I was in my room getting ready for the day when Karen knocked on my bedroom door asking somewhat anxiously if I could turn on the television we had in our room. It was the only TV in the house with an antenna. Karen did not watch live TV so the request coupled with her uncharacteristic manner struck me as quite odd. She explained through the door as I was hastily dressing that a plane had hit the World Trade Center. Through my mind flashed the image of something like a little Cessna figuring it was a freak accident though I certainly was immediately concerned for any of the planes occupants. The Towers were so massive…what could a small plane do?  I was not prepared for what I saw. The gaping hole with smoke billowing out of it did not have the look of a small incident.

The WTC, as we locals called it, was a big part of our lives. We saw the towers daily as we traveled about the city, enjoying their majestic rise from the city floor. We passed around and underneath them regularly on the subway and PATH trains. The WTC contained a central subway station which connected Manhattan to New Jersey via New Jersey’s PATH train system. Our family enjoyed going to the Borders book store in the WTC and visiting the very large discount department store just across Church Street named “Century21”. We would often find ourselves just blocks from the WTC walking along the Hudson River on Battery Park City’s esplanade to Rockefeller Park which was a oasis of green grass, beautiful flower beds, as well as the home of a whimsical sculpture garden by Tom Otterness which we all greatly enjoyed. It was one of our favorite destinations within our city.

Karen and I watched the television screen in horror as the newscasters were desperately trying to make sense of the catastrophe unfolding before our eyes at 1 World Trade Center. The horror increased as we saw people leaping to their deaths in real time to escape the inferno behind them. It became startlingly clear that this was no accident as we heard the screaming engines of the second jetliner approach, then watched it plow into 2 World Trade Center seconds after coming into view. The widespread panic was palpable. You could hear it in the newscasters voice and in the screams and gasps of horror coming from the city streets.

While I thought I knew where my husband was (at school), I was not totally sure as he often would run errands into lower Manhattan. To say I was nervous was an understatement. Multiple calls to his cell phone went unanswered.

As I was watching the news my sister called me from California. 1 World Trade Center had just fallen.  She was driving to work when she heard the news. I was speaking to her as I was watching, all the while relaying to her what I was seeing.  She asked me where my husband was and I told her I was not completely sure, but I thought he was at school just about 4 miles from the WTC. As we were talking the second tower began to list and then crumpled to the ground. I watched it fall, immediately told my sister what had happened and then …suddenly and simultaneously… the television lost it’s signal and my cell phone went dead. I had never before experienced anything so haunting.

I still did not know for certain where my husband was.

Not only had we lost cell and television reception, we had also lost our internet connection, and radio reception. The main telephone exchange for New York City was just blocks away from the WTC and major relay antennas for cell service and radio were on 2 World Trade Center. I can only assume that others in the rest of the world continued to watch as the events unfolded. We were a few miles away yet had very little idea what was going on for almost a week. The world was disturbingly silent.

I knew there was no way I’d reach my husband via his cell phone. All there was for me to do was wait, just like thousands of others.

Finally, my husband did call. It turns out he had been safely ensconced in Pratt’s library about 4.5 miles from the World Trade Center when the world as we knew it fell apart. He left the library and walked to the gym where he noted the TV was not on the customary music video channel, but on a news channel. He asked what had happened and was told planes had hit the World Trade Center. He asked if they were ok and was told after a pause that they were gone. He tried calling the house on his cell phone to no avail. He was able to locate a pay phone and after several attempts reached me on the land line. He asked what I thought he should do- should he come home? Or should he stay as he had classes scheduled? I wasn’t much into considering anything other than him getting home- and in a hurry. I asked him to get on the first train out. Actually, I think I insisted.

He managed to be on one of the last trains out of the city before the trains stopped running and the remaining masses resorted to walking out of the city. It seemed like it took an eternity of silent waiting for him to arrive when in actuality it was about 3 hours- twice the expected time. I was not sure if he had made it to a train or if he was still in the city. Once he arrived back home he recounted how it was a very eerie feeling to be on the train filled with dazed people covered in dust. The train tracks right across the street sat silent for days afterwards and gone were the near constant sounds of airplanes criss-crossing the skies above. The world was silent. We’d even lost regular phone service. I think it was amazing that his pay phone call even reached me.

Our church met on the west side of Greenwich Village and was just shy of two miles from Ground Zero. We could not meet that first week as it was within the area of Manhattan that was locked down immediately following the collapse of the towers.

Travelling into the city became other-worldy.  Instead of seeing the gleaming “Twin Towers” we saw a single twisting black plume of smoke that possessed a horrible and acrid smell that I will never forget. It billowed heavenward for a month afterwards. Almost instantly the city was filled with heavily armed and flack-jacketed National Guardsmen. They were plentiful on both ends of all bridges that crossed into Manhattan and the subway stations and platforms were crawling with them. They were also placed strategically out on the streets.  It was as if the city I loved had vanished, overnight. The vibrancy had been stripped away and replaced by fear. I don’t know why, but I was not fearful. I was defiant and determined and I greatly disliked the strong military presence in the city. One of the verses I have clung to during difficult times is “For God hath not given us a spirit of fear, but of power and of love and a sound mind.” 1 Timothy 1:7. This was one of those times. I consider fear, in any form, to be antithetical to Christ’s dwelling within me. A measure of stubbornness helps as well. :) This does not mean I do not battle it from time to time, but I have the grace of God to pull me up and out of it.

Walking in and around Battery Park City shortly after 9/11 was like stepping into a modern day ghost town. We could look through the windows of businesses and see them just as they were left- in a hurry. One small restaurant within two blocks or so stands out in my mind. The inside of this formerly trendy establishment was covered in a forbidding thick layer of gray dust, the windows were filthy. Dirty drinking glasses, plates, bowls and silverware were scattered about thickly on every surface. Soiled napkins were laying about like pieces of old confetti. It was very eerie.

Over the next few months little by little the normalcy of life began to return.  In February, 5 months after we had paid our deposit, we were finally able to take possession of our apartment and move in. Slowly things began the return to a state of normalcy as people resumed living and the Guardsmen dwindled in number. When spring finally arrived, it brought with it new hope and healing.

We will never forget. How could we?