Nebraska: The Power of Grace 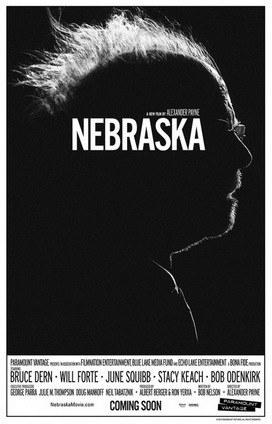 This is my third movie review and I have enjoyed the process so far. I think it is helpful to think about movies in a more philosophical and theological light. However, people have asked me several times if I recommend the movies I am reviewing or not. Originally I had not planned on making such a judgement…I just wanted to practice thinking more deeply about the films. But, I am a slave to the masses (yes, both of you!) so at the end of the reviews I will begin putting a thumbs up or down. I’ll keep it simple like that. But, just a warning. I’m easily amused so I suspect I will do more thumbs up’s than down.

I’m not good at watching the hype so I didn’t even realize that Nebraska was a Black and White film when I went into the theater. To be honest, the low contrast black and white filming of the movie bothered me for the first 20 minutes or so of the film. But, it soon felt natural and by the end I felt that the no thrills, low luster cinematography was not only evocative of the Midwestern landscape but of the every day ethos of the film.

(Spoilers to follow..thumbs up or down at the end of the review)

Movie goers are well accustomed to the road trip genre of movies. When you throw the words road trip movie and comedy into the same sentence one immediately thinks of films like National Lampoon’s Vacation or The Hangover. Nebraska is very different.

The plot of the film is deceptively simple. Woody Grant (Bruce Dern) believes he has won a million dollars in a sweepstakes similar to Publishers Clearing House and he is determined to go to Lincoln Nebraska to claim his money; he doesn’t trust the Post Office with something so important.

The movie opens with the very elderly Woody along the side of the freeway trying to walk from his home in Billings, Montana to Lincoln. A police officer pulls over and ends up taking him home. When he is home his wife Kate (June Squibb) is furious. We get our first glimpse into their relationship as she verbally abuses the seemingly simple and confused Woody. She bad mouths Woody to her adult children David (Wille Forte) & Ross (Bob Odenkirk). But, despite her protests and threats to put Woody in a home he continues to try to walk to Lincoln.

David, the younger son, soon decides to drive his father to Lincoln. We quickly learn that Woody has been an alcoholic most of his life and on the first night of the trip he gets drunk, falls, and has to go to the hospital. The time in the hospital meant they could not make it to Lincoln before the weekend so the headed to Hawthorn which was where Woody and Kate had grown up and gotten married.

A lot happened in Hawthorne. The weekend there turned into a mini family reunion with both Kate and Ross joining them there. Woody let out that he had one a million dollars which made him a sensation in the small town. We also learn more about their history which really humanized Woody who we first saw as an emotionally absent alcoholic father. He was that but the insight into his life was helpful in understanding his history.

On their last day in town, family and old friends began turning on Woody wanting a piece of his new-found “wealth.” Eventually, his nephews jump him in the night and steal his sweepstakes letter. When they realize that wealth is not real they toss the letter which is found by someone else and everyone realizes that Woody is confused about winning money.

One oddity is how Woody wanted to use the million dollars. He wanted to buy a new truck because he had never had a new truck (even though he could no longer drive) and he wanted an air compressor to replace one that had been stolen by his old business partner decades before. He never mentioned anything more. At one tender moment David asked him what he would do with the rest. Woody hesitantly admitted he wanted to leave it for the boys so they would have something.

In the end David still took Woody to Lincoln to redeem his winnings where he was told that he wasn’t in fact a winner. The business gave Woody a consolation “I’m a winner!” baseball cap. At that point, David trades in his Subaru for a five-year old truck, which he described to Woody as almost new and bought air compressor. David put Woody’s name on the title and Woody believed David had worked something out with the sweepstakes company. David then drives back to Hawthorne and allows Woody to drive through town with his hat and truck waiving to those who had mocked him the day before.

I have to admit I cried at the end of the movie. Part of it was the theme of grace. Woody was a pathetic soul that had not lived a good life and had not been a good father. Through most of the movie he was confused and lifeless. The one point in the film where he showed life was when he was driving that truck through town with David crouched down so he couldn’t be seen. Woody was like the teenager who wanted everyone to see him driving his new truck. It was a beautiful and subtle message of the inherent dignity in humanity. It was a redemptive tale where David had restored that dignity to Woody through his sacrifice.

The other part that was emotional for me was that it reminded me of the time before my Mom passed away from cancer. There is a moment in life where the children take care of the parents. I remember my Mom thanking me and ruminating on the idea one day when we stopped at a fast food restaurant for her to use the restroom. I helped her out of the car and into Carl’s Jr. I waited for her and then helped her back out to the car. It was one small way for me to thank her and show her respect and dignity. My mother was a great parent, much different from Woody. But, I saw that same care given by David for his aging parent  which conferred respect and dignity. It affects me even now as I type.