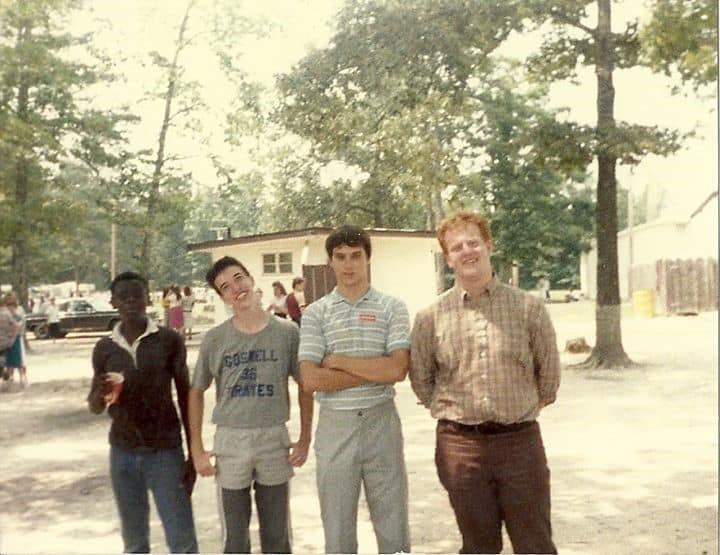 “A picture is worth a thousand words,” but in my case a picture is also worth at least a thousand undone deeds. The picture I’m referencing was taken sometime in the late 1980s and featured four misfits, including me at a Pentecostal youth camp in Redfield, Arkansas. Redfield, a small rural community, just about an hour or so south of Little Rock, featured a big orange restaurant as its main attraction, and it was always just a few degrees cooler than the surface of the sun in mid-July. Hot, dusty, and with little shade, the campground featured softball fields and basketball courts but little else to occupy our time. The main attraction was intended to be a large air-conditioned tabernacle where we were subjected to Bible teaching and preaching twice a day for upwards of three-hour stints that centered on the interpretations and perspectives of our small oneness Pentecostal holiness group. Most of the Bible campers were like me, white, as was the organization to which we belonged. But when I came across this picture in my social media memories last summer it inspired me to reflect once again on my friendship with Roy Butler. Roy was Black, and that particular summer he went with me to youth camp where our friendship was an anomaly that garnered quite a bit of attention, but mostly for all the wrong reasons.

Roy and I were about the same age, and he became a regular at our predominately white church via our church’s bus ministry. Bus ministry as it was utilized in the 1980s and 90s served to increase Sunday School attendance by providing rides primarily to children whose parents weren’t motivated to bring them. For us, in our community that was predominantly Black constituency, and it meant that we were actively soliciting Black children to attend our white church, often enticing them with candy, games, and other gifts including bicycles, toys, and food. These enticements were intended to serve as a lure, because we were convinced that our white faith community was best qualified with gospel truth, along with superior worldview and culture, to correct what we perceived to be the widespread poverty, crime, drug use, and violence in the Black communities of our small rural city. Although these motivations were never examined closely in these particular terms, as it was often simply seen as our Christian duty to proselyte others, it is undeniable that we were plagued by white privileges that convinced us we were best suited to provide for these “poor Black children” what their communities weren’t able to provide for themselves.

Ironically, the larger stream of Pentecostalism, of which our small group was a tributary, found its origins in Los Angeles, California, at Azusa Street where William Seymour, a Black preacher and son of former Louisiana slaves led an influential revival for three years; there Black and white people worshiped together with emotional fervency and emphasized the gifts of the Holy Spirit, specifically the phenomenon of “speaking with tongues.” But in all the sermons we heard at this youth camp that encouraged us to participate in the experiences of Azusa Street, we never heard about the people of Azusa Street. We never once heard a sermon about the leadership and courage of Seymour. Instead, we openly appropriated their worship styles and passed them off as our own mediocre innovations. My friend Roy was subjected to more invisibility, as many white adults praised me for befriending this “Black boy” and bringing him to youth camp so that he could receive “the gift of the Holy Ghost with speaking in tongues” but they never spoke to him or acknowledged his presence.

As I looked at this picture and reflected on that summer, coupled with all the tragic killings of Black people in the summer months of 2020, specifically the murder of George Floyd, it occurred to me that in many respects the friendship that I enjoyed with Roy was notable but at the same time rife with the complications of my own notions of white supremacy that I certainly held at the time, and continued to have residual impacts on my daily life. I was moved to write a letter to Roy, with my greatest regret being that he died from complications from a brain tumor many years before I could come to terms with the implications of the unintended consequences of my behavior toward him. Sadly, I wrote my letter to him much too late. But my hope is it will set an example for others to reexamine their own present relationships with others and for white people to deal with the latent racism that may be present in their own hearts and in the institutions they lead and influence.

There is a lot of chatter and conflict these days around racial relationships in the context of Christianity and its various religious organizations. Most recently, the Southern Baptist Convention entertaining a host of resolutions to disavow Critical Race Theory, interestingly enlisting the help of massage therapist turned mathematician and self-identified hoaxer James Lindsay. According to The Washington Post, “through online videos, conference speeches and a relentless Twitter feed, Lindsay has warned that discussions about race and sexism in the SBC are really a Trojan horse, designed to destroy the church from within. In particular, he’s taken aim at Bible teacher Beth Moore, SBC President J.D. Greear  and Baptist ethicist Russell Moore — all of whom he claims are part of a woke agenda infiltrating the SBC.”

What Lindsay and those leaders of the SBC utilizing his influence in the campaign against Critical Race Theory fail to understand is that CRT, like all critical theories, isn’t a worldview but a tool of scholarship to better understand the world around us and the inequalities it continues to perpetuate. Unfortunately, even many politicians and legislators are conflating what they see as problematic underpinnings of Marxist ideologies with the utility of a perspective to help us collectively imagine a better and more equitable society. What these leaders fail to realize is that every perspective on culture and society has problematic undergirding that shouldn’t disqualify the helpfulness of the truths it reveals. For instance, every major Christian denomination in America at one time embraced the institution of slavery or ended up splitting over it—so does this mean that any good that resulted from the work of these denominations is now null and void? Absolutely not. While Critical Race Theory is a helpful tool for understanding the continuing injustices of our society, embracing its totality isn’t necessary to demonstrate that systemic racism continues to perpetuate itself to the detriment of our nation.

As a Christian, I have a responsibility to continue the critical evaluation of my faith and to recognize the moments my exercise of true religion has failed those closest to me, like my friend Roy, and to make amends when possible and changes when necessary. Collectively, Christianity should do the same.