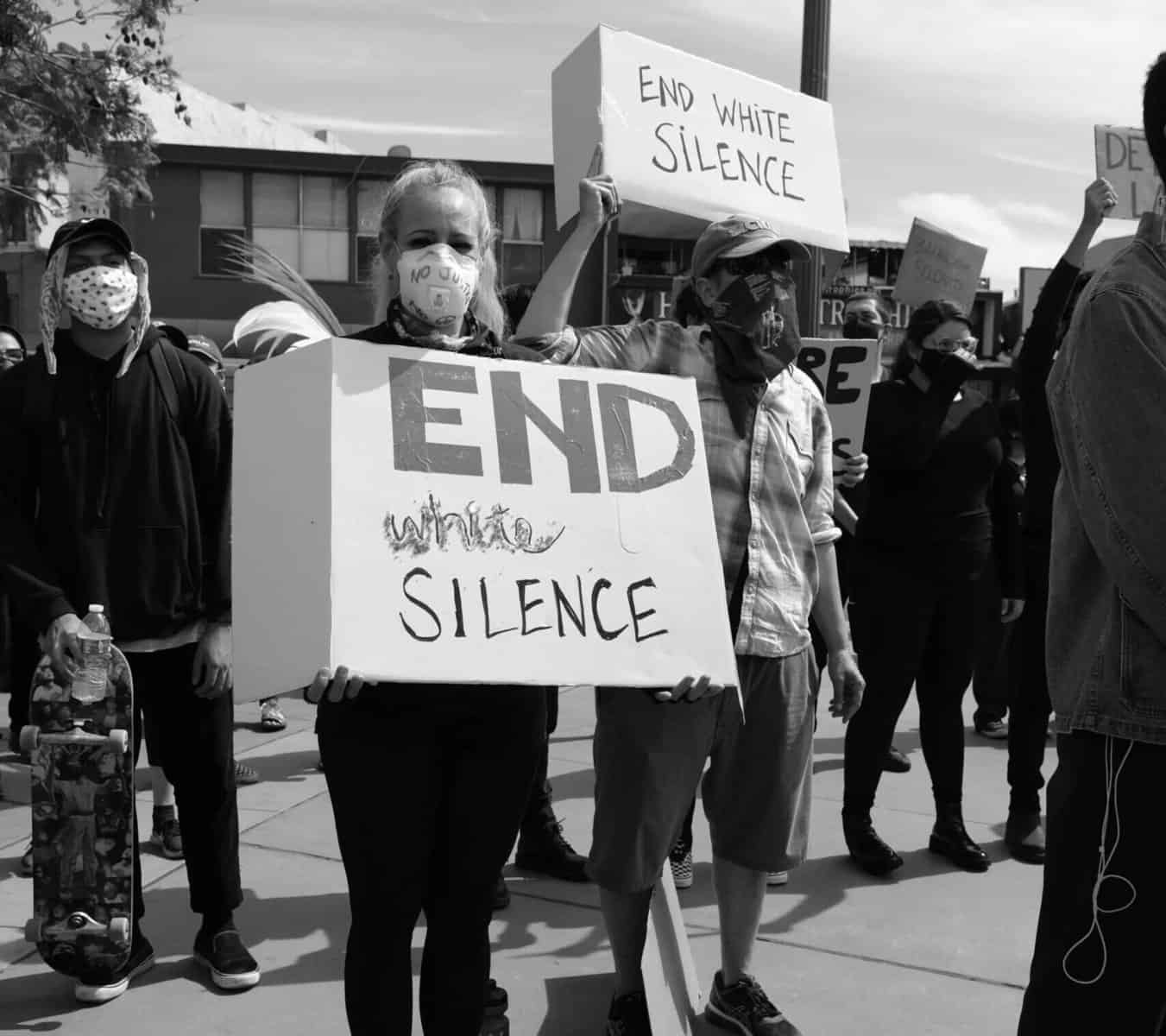 This is going to be difficult to write. Please understand that my perspective is that of a white man who has grown up with White privilege. Thus, I feel as if my voice on this issue should be outweighed by the voices of Black men and women who have so much greater understanding, and experiences, and have witnessed racial oppression and injustice purely because of their skin color. Regardless, I hope that the thoughts and apologies I share will move at least one person into action to confront satanic racism.

Last month, it was reported that two White men shot and killed a Black man, Ahmaud Arbery, as he was out for an everyday, peaceful run. Upon finding out, I was moved to anger. The severe injustice of such an atrocious act was hard to comprehend. But, as a White man myself, it never actually scared me for MY LIFE. I could get angry and post on social media but I still knew that when I go for a run in the morning, I’m going to be okay.

Growing up, I liked to think that I wasn’t privileged, but I was. I grew up in a family that spent extensive time on the mission field in Africa. Whenever we were home in the United States, I had several Black friends simply because I played basketball competitively. From AAU (travel basketball leagues) to college, most of my teammates were Black. I loved my teammates; we went to war together.

Throughout my entire life, I have been around Black Africans and Black Americans, extensively. I never considered myself racist or felt like I discriminated against any race. I’ve always felt I loved people equally – just as Jesus would want me to. However, for the last few years I have been asking God to show me my blind spots. One of the things He uncovered was my blind racism. I didn’t want to see it, but I had to. Why was I getting more nervous when a Black man was walking near my car than when a White man was? Why did I make assumptions that most Black people were trouble makers? Why did I not care to learn about Black history in America? I realized that I was treating people differently because of their skin color.

I went through a process where the Spirit of God continually revealed my own prejudices toward my Black brothers and sisters. Sure, my parents taught me to love all people, but there’s a system of white supremacy that inherently drives the white man’s agenda.

I was in the middle of this process of realizing my blind racism when Colin Kaepernick kneeled during the national anthem at an NFL game. I wasn’t outraged like others that he was “disrespecting our flag and our military,” but I was too scared to be vocal about it. With the circles that I found myself in, it felt like something as small as saying “Black lives matter” was as big as me saying that I had a fascination with Beelzebub.

Ironically, the Christian circles around me who wore cross necklaces, talked about the love of God and showed a passion for their church, were the ones in my circles who were furious by a “kneel” that they themselves do to show reverence to God. My social media was filled with memes of flags from evangelicals that said, “I stand for the flag and kneel for the cross.” Other friends and acquaintances expressed severe displeasure with Kaepernick and why he should be removed indefinitely from the NFL. Instead of trying to understand his reasoning for kneeling, they cared more for a flag that, among other things, represented White (not Black) freedom.

White pastors have given sermons about the passages of Jesus ministering to Samaritans but have failed to mention the full significance of those encounters. Samaritans were hated by Jews. Thus, whenever Jesus tells a parable of a “Good Samaritan” (Luke 10:25-37), heals a Samaritan’s leprosy (Luke 17:11-19), or spends time showing love and mercy to a Samaritan (John 4:1-26), He is making a larger point to his Jewish followers. He is saying, “Samaritan lives matter.” He is not saying that all lives don’t matter, He is saying that the Jews need to start acting like Samaritans’ lives do. The injustice and hate towards them needed to end if His followers wanted to be disciples.

Today, Jesus is saying “Black lives matter” and His Spirit is calling on all white evangelicals to do the same. With the recent death of George Floyd, Jesus would be on the front lines in love, eager to see justice done for these people created in His image. Jesus suffers with the sufferers. He breaks with the broken. He suffocates with the strangled. He dies with the murdered. He experiences the pain of His creation. Black lives matter to Jesus, so they should matter to His followers too. The weight of this truth has finally started to sink in with me.

My prior silence was unacceptable. I needed to repent. Yesterday, I thought deeply about what my life would be like if tomorrow I woke up as a Black man. I thought about my daily routine – the places I go, the park where I run, and the people who I do business with – and I got scared; legitimately frightened. My life, my wife’s life, and the life of my soon-to-be-born daughter would all be affected. My thoughts opened my eyes in a greater way than ever before. I could finally see the misfortune of so many Americans.

To my Black brothers and sisters: I’m so sorry. Even when some of my best friends were Black, I was failing them. Even when I was cordial and kind to Black people, I was still failing them. I realized that it’s simply not enough to be cordial or to be friendly. I had to listen. And now, I HAVE TO SPEAK OUT.

Since the news of George Floyd broke, a new kind of anger and brokenness has been rising inside of me. I have not been able to stop thinking about it. Racial injustice has been happening in our land for the last 400 years. We were founded with racist bloodshed dripping into our soil and it continues to drip.

When a community that has experienced racist bloodshed over and over again does not get heard from peaceful kneeling, their desperation for justice may turn violent (though most violent rioters are Antifa advocates and white supremacists). It is a symptom of a greater evil. We must listen to our Black brothers and sisters and assist them in bringing justice swiftly and stand with them consistently if we want future change.

I’m calling on my White evangelical friends to speak against satanic racism. Specifically, I’m calling on pastors with predominately White congregations to speak out against the racism that killed George Floyd, Ahmaud Arbery, and the thousands who have suffered at the hands of the white man. Pastors, if you feel your voice does not matter, I implore you to listen to the heart of your Black brothers and sisters. The Spirit will show you the importance of speaking out. If you do not, the future bloodshed is on your hands, too.

If the people in our country cannot respect each and EVERY individual, we are not great. In fact, we have never been great. And we are certainly not a Christian nation. The Jesus I read about stands with the oppressed and marginalized. Those He does not stand with self-righteous Pharisees who are not willing to stand in the trenches with the suffering.

We must ALL use our voice!

If Jesus is our Savior, it’s our mission to take these words of His seriously:

31 “When the Son of Man comes in His glory, and all the angels with Him, then He will sit on the throne of His glory. 32 All the nations will be gathered before Him, and He will separate them one from another, just as a shepherd separates the sheep from the goats. 33 He will put the sheep on His right and the goats on the left. 34 Then the King will say to those on His right, ‘Come, you who are blessed by My Father, inherit the kingdom prepared for you from the foundation of the world.

40 “And the King will answer them, ‘I assure you: Whatever you did for one of the least of these brothers of Mine, you did for Me.’ 41 Then He will also say to those on the left, ‘Depart from Me, you who are cursed, into the eternal fire prepared for the Devil and his angels!

44 “Then they too will answer, ‘Lord, when did we see You hungry, or thirsty, or a stranger, or without clothes, or sick, or in prison, and not help You?’