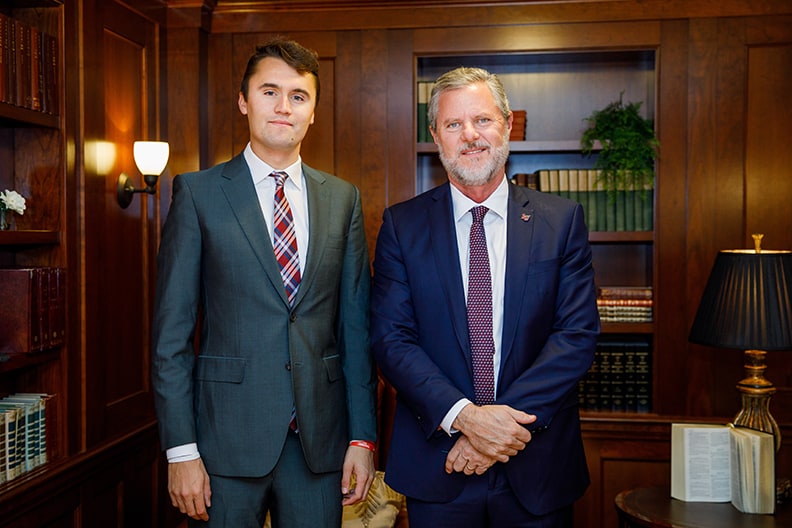 In 2019, Liberty University formed the Falkirk Center as a right-wing political think tank dedicated to waging war on the “Cultural Battlefield.” The name Falkirk is a blending of the last names of the founders, disgraced former Liberty University President Jerry Falwell Jr. and conservative activist Charlie Kirk who dropped out of college to pursue his activism which includes the founding of Turning Point USA, a conservative student organization. The Falkirk Center has received broad criticism since its founding for its single-minded support of Trump.

Emily McFarlan Miller writes about the student petition to close the center:

A new petition from a group calling itself Liberty United Against Falkirk is calling for Liberty University to shut down the Falkirk Center, a conservative political think tank at the evangelical Christian school in Lynchburg, Virginia….

“Students at Liberty are tired of having our witness tarnished by association with a center that is trying to undo Liberty’s mission,” the petition said.

“We want to be known as people who were given an education to not only enter our desired fields, but also to live as people chosen by the Father, united to the Son and regenerated by the power of the Holy Spirit — not as people who were educated to become champions for Trump and Western Civilization in the ‘cultural battlefield.’”…

The petition also expressed concern about a number of the “fellows” associated with the center, calling it a “gateway for many wolves in sheep’s clothing — people who claim Christ’s name because it is convenient for their personal or political gain.”

“Associating any politician or political movement with Christianity bastardizes the Gospel of Jesus Christ,” the petition said.