A hidden picture? The image of God in humanity 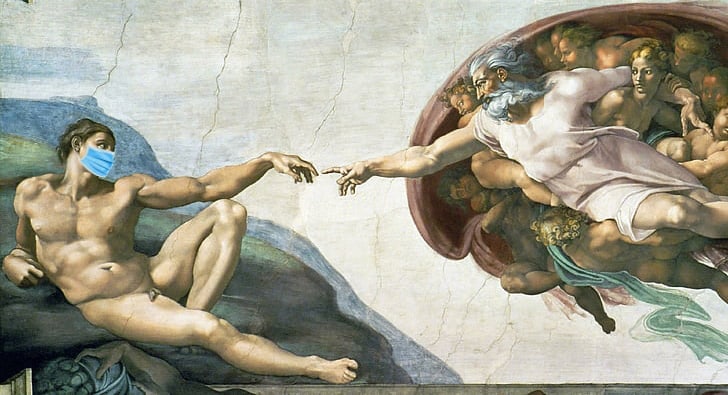 The COVID pandemic has created a number of theological discussions, some meaningful and most depressingly wrong in all degrees.

One of the most common and oft abused is the notion that because humanity is created in the image of God, wearing a mask is an affront to the Creator. The notion has gained so much heading that it is being used in legal arguments, claiming that mask mandates are a violation of religious belief. A couple of months ago, two siblings  made national headlines when they claimed their school was violating their First Amendment rights by requiring masks.

Nelson [their father] said Drew, a senior, and Victoria, a junior, were booted from the campus on Aug. 19 when they declined to wear masks because of their religious beliefs.

“The Bible says we’re made in the image of God and Satan tries to cover that up. A mask is a sign of oppression,” Nelson said Thursday. “If it was Muslim, Jewish or something of a more high-profile minority religion in this country, yes, they would have accommodated … just to say they weren’t discriminating based on that religion. But they feel safe because it’s Christianity.”

The Nelsons are not alone. A Michigan Catholic school tried to use the same argument to challenge a mask mandate in court, as did an Ohio lawmaker, who objected, saying, “This is the greatest nation on earth founded on Judeo-Christian Principles. One of those principles is that we are all created in the image and likeness of God. That image is seen the most by our face. I will not wear a mask.”

The absurdity of the logic aside — ad absurdum: If masks cover the image of God, then all clothing does and being anything other than naked is a sin — it’s a deep misunderstanding of what it means to be created in the image of the Creator. It also relies on the flattest, most literal reading of the word “image” (which is almost consistently translated that way from the Hebrew across all major Christian and Jewish translations alike).

The word image in this instance, however, is not understood as corporeal form — God the Creator has none — but is instead illuminated by understanding it as “likeness.” Unique among the created creatures, humanity has a special creative spirit and connection with the Divine.

This is certainly not a new idea. The Catechism of the Catholic Church teaches as much in its first chapter: “God, the first principle and last end of all things, can be known with certainty from the created world by the natural light of human reason.” Without this capacity, man would not be able to welcome God’s revelation. Man has this capacity because he is created ‘in the image of God’”. (CCC 36) The creative aspect of bearing God’s image is expanded upon in CCC 2501: Created “in the image of God,” man also expresses the truth of his relationship with God the Creator by the beauty of his artistic works. Indeed, art is a distinctively human form of expression; beyond the search for the necessities of life which is common to all living creatures, art is a freely given superabundance of the human being’s inner riches. Arising from talent given by the Creator and from man’s own effort, art is a form of practical wisdom, uniting knowledge and skill, to give form to the truth of reality in a language accessible to sight or hearing. To the extent that it is inspired by truth and love of beings, art bears a certain likeness to God’s activity in what he has created. Like any other human activity, art is not an absolute end in itself, but is ordered to and ennobled by the ultimate end of man.”

Taking the discussion back much further in history, Augustine, who died in 430, understood that the image of God is found in humanity’s soul and rationality:

But the mind must first be considered as it is in itself before it becomes a partaker of God, and His image must be found in it. For, as we have said, although worn out and defaced by losing participation of God, yet the image still remains. For it is His image in this very point, that it is capable of Him; which so great good is only made possible by its being His image.

Several hundred years later, Aquinas expanded on that idea, writing in his Summa:

But how old is this idea? And how does it relate to the idea of covering the face? Writing in the second century, Iraneus  goes so far as to say that while humanity was created “in the image,” that image bearing was completely invisible until the Word became flesh and fully demonstrated its presence in humanity vis-a-vis Jesus of Nazareth:

For in times long past, it was said that man was created after the image of God, but it was not [actually] shown; for the Word was as yet invisible, after whose image man was created. Wherefore also he did easily lose the similitude. When, however, the Word of God became flesh, He confirmed both these: for He both showed forth the image truly, since He became Himself what was His image; and He re-established the similitude after a sure manner, by assimilating man to the invisible Father through means of the visible Word.

And that is where the idea of the image in humanity becomes radical. It makes communion with every member of our race not only a goal, but an ideal. “How can you love the God you cannot see when you do not love the brother you do?” the apostle asks, and the question hangs in part because in failing to love the brother, you are failing to love God.

In the American Book of Common Prayer, the general confession contains two lines that seem like separate sins when read aloud in the liturgy, but I have since come to understand them as one, “We have not loved You with our whole heart; we have not loved our neighbor as ourselves.” Just as the Spirit is everywhere, in all places and filling all things, God’s likeness is in each person in such a way that to not love them is in some way to reject God. The second greatest commandment is an extension of the first.

A mask can no more obscure the image of God in a person than can a pair of socks.

Bad theology can often lead to bad decisions, but by the grace of creation we can use our rational soul — the imago Dei — to find our way home again.