Should we topple the white Jesus? 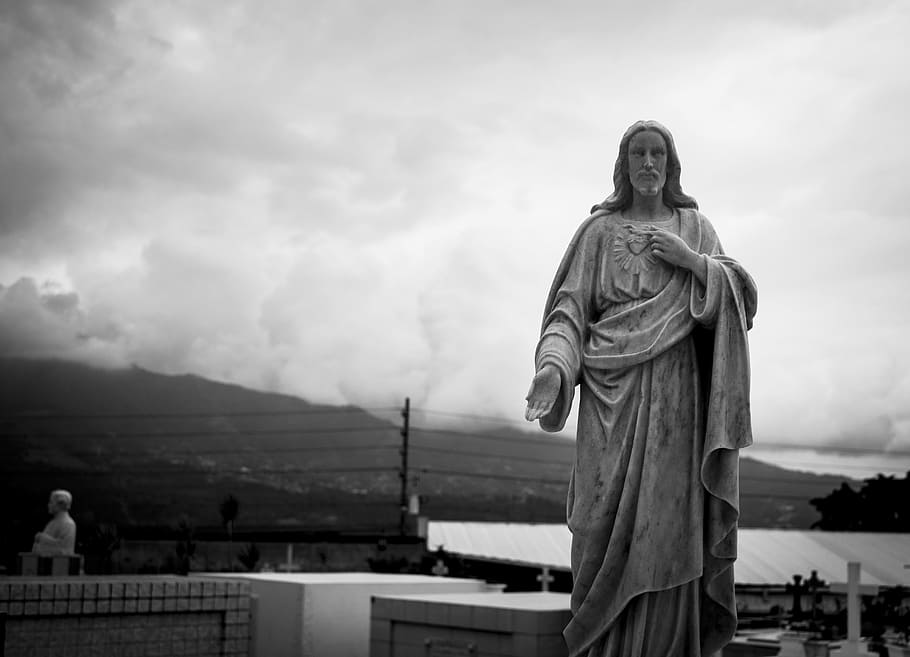 As an Artist, Arts & Religion Scholar, Christian, and Hispanic who has been vocal about racial issues, I immediately started receiving messages and comments from friends about Shaun King‘s recently tweeted argument that statues of white Jesus should be removed. Mr. King’s contention is that they are icons of white supremacy.

I both agree and disagree with King on this subject.

I would argue that the early white depictions of Jesus were not manifestations of white supremacy. Rather, I would argue that they came to be as oppressed religious, and in some cases ethnic, minorities co-opted the visual language of the then-dominant Roman religion. Early images of Jesus followed one of two trajectories. First, there was the adoption of the image of the smooth-shaven Apollo to serve as the image of Christ, and second, was the iconic representation of the bearded philosopher as Christ.

Historically, it is quite common for the image of Christ to be adapted to differing ethnic depictions. There are first-millennium white, Black, Asian, and Middle Eastern representations of Christ. I have no theological problems with such images. Multi-ethnic religious images allow viewers to place Christ into their context. It helps them relate to Christ. While we are created with the Imago Dei, the image of God, in us, part of the impact of the incarnation of Christ is to make Him more relatable to us. It is good for us to be able to see ourselves in images of Christ.

So, while I argue that the origin of the white Jesus is not necessarily a manifestation of white supremacy, I have to acknowledge that these images have been used to support white supremacy. Too many Christians see the images of a white Jesus not as a depiction which allows white cultures to better relate to incarnate Deity, but as historical representations. Christ, in American culture, is often assumed to be white. He wasn’t. Further, there has often been a great deal of push back against the idea of depicting Jesus as another ethnicity, especially Black. In the minds of many, it is heretical to think of Christ as anything other than white. It is not heretical. It is orthodoxy and it should be encouraged.

Despite my iconophile status, I cannot help but think of the second commandment:

You shall not make for yourself a carved image, or any likeness of anything that is in heaven above, or that is in the earth beneath, or that is in the water under the earth.You shall not bow down to them or serve them, for I the Lord your God am a jealous God, visiting the iniquity of the fathers on the children to the third and the fourth generation of those who hate me, but showing steadfast love to thousands of those who love me and keep my commandments. (Exodus 20:4-6)

I’ve thought a lot about this passage over the years. Often iconoclastic Christians argue that we should not make images at all. But, the commandment clearly states we should not make images we intend to worship. The part that struck me in a new way today is the generational aspect of this commandment. With the current racial tensions in our nation, I have thought a good deal about the generational nature of sin, particularly the sin of racism. But, never have I thought of it in the context of imagery.

In scripture, “hate” is often a hyperbolic term meaning to “love less than.” For example, God does not really want us to hate our father, mother, wife, children, brothers, and sisters. (Luke 14:26) He wants us to love them less than Him. Considering how some behave, I do question if they love the real Jesus less than their depiction of white Jesus. Shaun King has received death threats over his idea that we get rid of white depictions of Jesus. That does not reflect the love of the True Christ.

Further, we must acknowledge that religion, including Christianity, has, at times, been co-opted as a tool of oppression. In the United States, this perverse distortion has led historically, even until today, to Christians supporting the oppression of other Image Bearers of God. Jemar Tisby’s excellent historical and theological work The Color of Compromise: The Truth about the American Church’s Complicity in Racism explores the details of this complicity in the American Church. (The associated video series is free through Amazon Prime to the end of the month).

I fear that the jealous God, YHWH, may hold us accountable for this generational sin of loving white Jesus over Him.

So, should we destroy all the white Jesuses? Should we send them all to Museums?

I’m not an iconoclast. I don’t like the idea of destroying 1700 years of religious art. From a practical perspective, I don’t think it is possible, or even ideal, to move all these images to museums.

The first step is for Christians, as a faith tradition, to repent of our idolatry. We must repent of our preference for white Jesus over the historical Middle Eastern Jesus. We must repent of allowing our faith in the God who is Love to be used as a cover for hate. We have not held to Pure Religion. “Religion that is pure and undefiled before God the Father is this: to visit orphans and widows in their affliction, and to keep oneself unstained from the world.” (James 1:27) We have neither tended to the needs of the economically oppressed nor have we remained unstained of the Original Sin of this nation. As a people, we are in a period of grief. There is a danger that we may collectively embrace worldly grief which, as Paul wrote, leads to death. We as the Church must embrace Godly grief, which leads to repentance. (2 Cor. 7:8-10)

The question then becomes, how do we begin to bear fruit consistent with our repentance? (Luke 3:8) This, in many ways, is the harder question. I think it involves moving away from our addiction to white depictions of Jesus. We should encourage ethnic depictions. We should encourage the Black, Hispanic, Asian, Middle Eastern, and Indigenous depiction of Jesus. Additionally, since the image of white Jesus has been weaponized in the white supremacist imagination, it would be wise for the white Church to consciously produce images of Jesus that reflect his Middle Eastern heritage, his brownness.

I would love to see an initiative in the Church that raises money and matches artists with churches to produce a new generation of Jesus images that reflect the diverse nature of Christianity and the ethnic heritage of Jesus. I can imagine a Renaissance of Jesus images that shows a rebirth of our awareness that Jesus died for the entire world and that he incarnated into a specific time and ethnicity in history. We need to seek to be washed from the stain of racism and actively advocate religion that is pure and undefiled before God.

If you are an artist, Christian, or church interested in supporting or collaborating in a project to create a new generation of multi-ethnic representations of Jesus. Please reach out to me. This is something I would love to help facilitate.