Bishop opens up about seeking help for depression 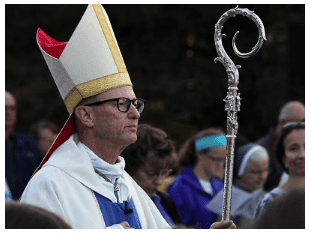 Depression doesn’t always strike at once.

But when you realize you need help, it is ok to take a break from the things that drain you — even if they’re good things.

That was one of the lessons Catholic Bishop James Conley shared during an interview with psychologist James Link. Conley had taken a year of sabbatical to seek help with depression after he was diagnosed with major depression disorder at Mayo Clinic. Now that he’s returned to active ministry, Conley is sharing his story.

Catholic World Report shares Conley’s interview. In it, he discusses how scandals in the Roman Catholic Church in 2018, the death of a young priest under his oversight, and having to remove priests in his own diocese helped trigger his depression over time.

“Because I’m the bishop, I felt like I had to fix all these problems – I was praying, of course – but it was all wearing me down. I took all that pressure and stress upon myself,” he said.

“During the Second Vatican Council, when things were really uncertain in the Church and in the world, Pope St. John XXIII at night would pray, ‘Lord, it’s your Church, I’m going to bed!’ I would always advise people to do the same, but I wasn’t doing it myself. I wasn’t sleeping – and you can only go so long without sleeping. So I decided that I needed to find out what was going on.”

He had begun seeking treatment and medicine, but his work as a bishop kept weighing him down. Some of his brother bishops eventually convinced him to step aside for a time so that he could properly treat his mental illness.

Finally, Conely discussed the problems with a familiar group of bishops: Archbishop Paul Coakley of Oklahoma City, Bishop Thomas Olmsted of Phoenix, and Bishop James Wall of Gallup. He was then convicted to take a break.

“We talked about it, and they convinced me to go talk to the apostolic nuncio to the United States, Archbishop Christophe Pierre, who was present for the meeting. He was wonderful about it. I told him everything … and he said, ‘You need to take a break.’ He was very positive and supportive.”

“So it was really my closest friends – I mentioned some of them, and there was another priest I had talked to a lot – who encouraged me to seek professional help.”

He said, when he returned, there was a line out the front door of people with a to-do list.

He said he has been practicing saying “no” to more things and managing his time better. He said he is trying to keep office hours from 10 am to 3 pm so as not to over exhaust himself.

“What this experience of mental illness has taught me is that life is too short to fill every day up from morning to night, even when we’re filling the day up with good things. So, really, finding the right balance – a healthy balance – is an art. I’m still working on the exercise piece.”

While not everyone can take an 11-month sabbatical, help is available. Those who have depression and need resources can reach out to the Substance Abuse and Mental Health Services Administration’s free, confidential, 24/7, 365-day-a-year treatment referral and information service in English and Spanish for individuals and families facing mental and/or substance use disorders helpline at  1-800-662-HELP (4357). Find out more at samhsa.gov/find-help/national-helpline.