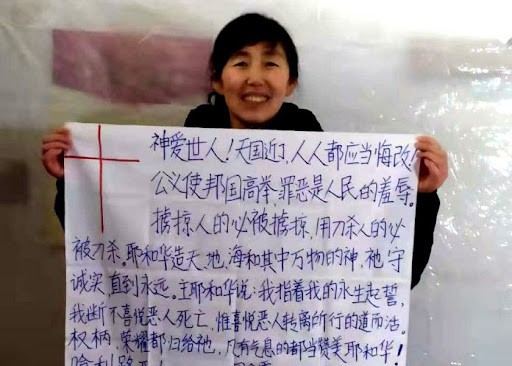 Jinxia’s stunt had her arrested and put into detention for 10 days on a charge of “disturbing social order.”

Police instructed Jinxia to return home to the port city of Dalian after the incident unfolded and she was released from custody.

She’s been arrested and prosecuted by Chinese authorities in 2015, 2016 and 2018 for similar efforts. She was taken into custody in 2018 after she showed a sign at a political event that stated: “God loves the people of the world and is calling out to Xi Jinping”.

Jinxia is an activist in China, she was subsequently charged with “picking quarrels, and provoking trouble” on Feb. 2. Jinxia stormed to the Communist Party of China headquarters in the Zhongnanhai area in Beijing and held up a sign suggesting Mr. Xi to embrace Christian faith.

The incident happened prior to Lianghui or Two Sessions. An annual political event in Beijing, which is overseen by the National People’s Congress and the Chinese People’s Political Consultative Conference, Lianghui distributes incoming policy shifts, ICC said, explaining that Chinese leaders usually crack down on citizen protests to ensure everything goes on evenly.

China has been accused of genocides for its detainment of Uyghur and other ethnic Muslims in western China, and human rights activists had voiced concern for years about the Chinese government’s longtime crackdown on unregistered churches and house church movements.

The Chinese government has committed large-scale detention of Uyghur people, imprisoning them inside internment camps indefinitely without any legal processing. These events are the largest-scale imprisonment of an ethnic and religious minorities since World War II.

Open Doors USA, which covers persecution in approximately 60 nations, estimates that China has about 97 million Christians (disputed), & many who worship in unregistered or “illicit underground” churches.

Read more about the incident here.